Mjolnir is one of the most powerful weapon in the Marvel. Considering the fact that not all can wield it and the crowd went crazy when Captain America lifted it!
Mjolnir, no doubt is up there right with Captain America’s shield as one of the most iconic Marvel weapons of all time.
And thanks to the Marvel Cinematic Universe, Thor’s hammer has become more recognizable than ever. And of course we all know that what kind of a big deal it is to be worthy enough to lift it! Even with all its glamour, there are plenty of things that movie fans could learn about this magical hammer, since the MCU has left out or forgotten to mention some of the most important things bout Mjolnir as said in the comic books!

The Mjolnir of Marvel comics can tear through the fabric of reality and translate every language in the universe and what not!
Here are the list of  Mjolnir’s powers that have been left out in the MCU 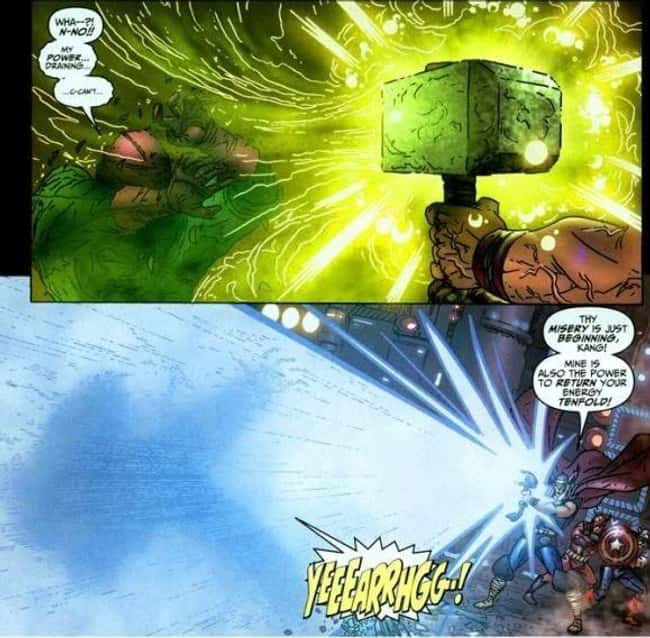 Mjolnir has the ability to absorb energy blasts that would have come in handy against the throngs of Chitauri in The Avengers or even while fighting the many versions of Ultron in Avengers: Age of Ultron.
So when an alien or some dangerous robot is firing their laser weapon at Thor, Mjolnir is to the rescue and absorbs these energy blasts and even fire them back at the enemy!
This power has been used by Thor in the comic books. In the 1980’s Thor # 301, the God of Thunder had to jet around to the gods of various religious pantheons in order to imbue Mjolnir with unique powers from different Gods to life.

2. The Person Who Is Worthy, Gets All Of Thor’s Powers! 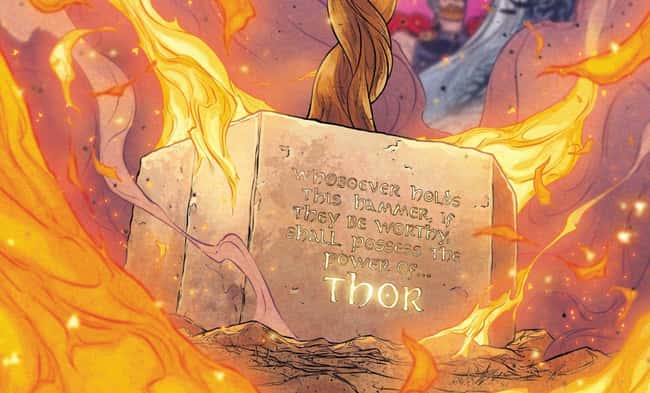 In the climax of Avengers: Endgame, when Captain America did end up wielding Thor’s hammer, the movie fans were treated to one of the greatest moments in the recent years. But we didn’t really get to see Steve Rogers get powers of Thor.
When anyone who is worthy enough to lift Mjolnir, they all are granted powers of Thor.
Just like when the cancer-ridden Jane Foster became new Thor in 2010’s she was turned into a powerful Asgardian version of herself.

3. Mjolnir Can Project Into A Physical Form & Talk Too! 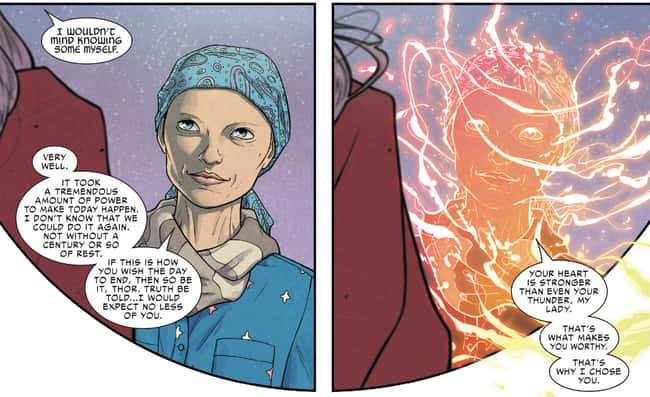 This is probably a trippiest powers that Mjolnir has in the Marvel Comics is that Mjolnir is the ability to project a physical form from and can even speak.

In 2016’s The Mighty Thor # 11, Mjolnir disguises itself as Jane Foster and teams up with Foster while she is in her Thor form. According to Mjolnir, it takes a massive amount of energy that takes over a century to recharge. We already saw Steve Rogers fight himself in Endgame so we wouldn’t mind Thor having a heart to heart conversation with Mjolnir created doppelganger.

4. It Can Control Weather (And More Than Just Lightning) 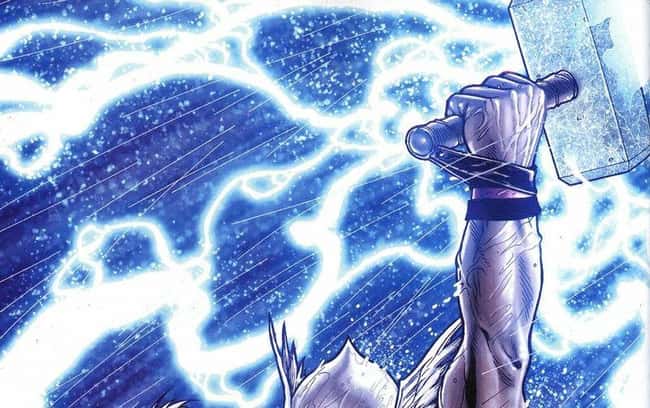 Thor is God of Thunder; so it is no brainer than that he can control lightning at all!
It is interesting to note that Thor along with anyone who wields Mjolnir can manipulate the weather which is a rival power of the X-men’s Storm herself.
And when we mention weather; it includes all- blizzards, snowfall, waves, summer, everything.
Thor hasn’t used these powers in MCU yet. We hope he does. 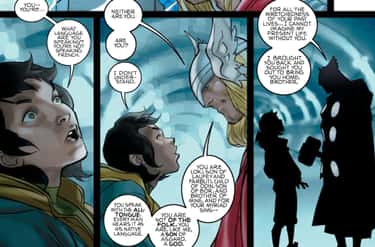 It has been undoubtedly mentioned that all Asgardians can speak any language be it from any planet of any galaxy!
They have that kind of ability aka two-way universal translator no matter where Thor ends up.
But Mjolnir also imparts the “All speak” ability to whoever wields the hammer and the person can speak to anyone, anywhere!

6. Can Detect & See Through Illusions

Mjolnir might be perfect wielding hammer (& powerful) but it actually smarter than you can think!
It can easily see though any illusions even from Marvel’s devil incarnate, Mephisto.
In the 1981’s Thor # 310, the hero is having a hard time against Mephisto and his tricks; but apparently it turns out that Thor throws Mjolnir around and the Hammer does the rest by itself and seeks out the real Mephisto through all these illusions.

7.  It Can Detect All Energies 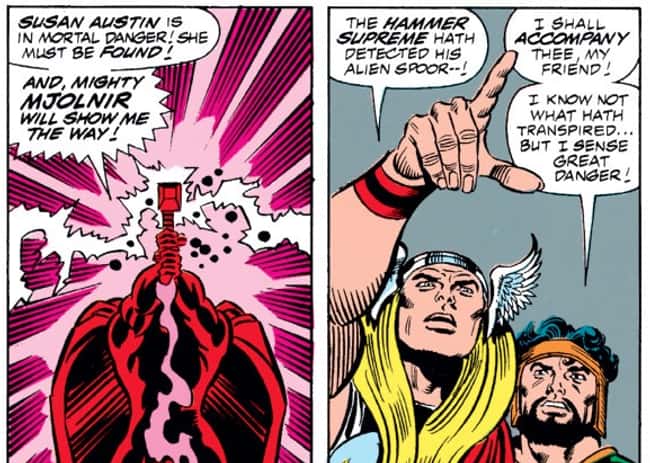 It is bit obvious that Mjolnir can locate Thor or anyone wielding it and the hammer always comes back to him after he has thrown it like a boomerang!

But, it can even locate a person as shown in 1990’s Thor # 417. Mjolnir can locate persons due to their energy patterns.

8. It Can Tear The Fabric of Reality 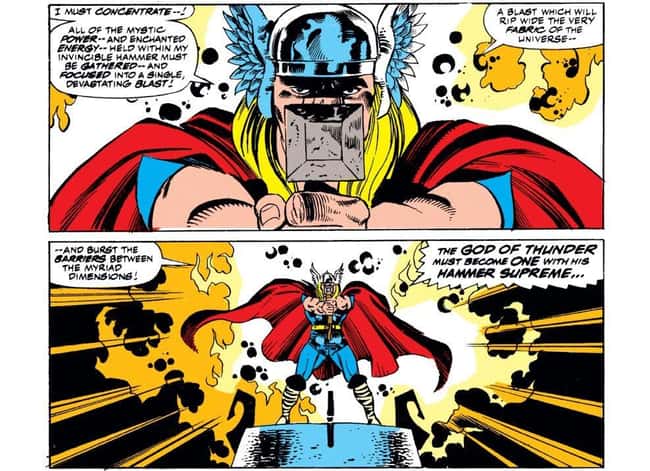 Doctor Strange is all set to travel into the Multiverse of Madness but we all want to see Thor use Mjolnir to rip holes in the fabric of reality!

Mjolnir allows the wielder to travel through different dimensions so Thor doing the same would be pretty interesting.

9. Thor Can Use Mjolnir To Transform Into A Human

For years, Thor had a secret human identity known as Dr. Donald Blake and there was even a reference to the same in the first Thor movie- but that wasn’t a situation where he had to pretend to be a human. Thanks to Mjolnir, Thor actually turned from a superpowered Asgardian into a human being.

10. It Is A House to What Is Left Of A Sentient Cosmic Strom Called The God Tempest 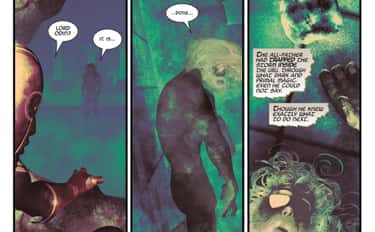 Jason Aaron’s “ Untold Origin of Mjolnir” story housed in 2016’s The Might Thor # 12, readers got a peek at the creation of Thor’s hammer.
But it turns out that years before the present- day Marvel Comics, Oden had fought a powerful sentient storm known as the God Tempest and eventually trapped it inside of a chunk of Uru Metal.
And God Tempest was directly responsible for the might of Mjolnir!
Just to make you aware of how powerful God Tempest was “Its winds blew comets off course, ripped worlds from their orbit, and snuffed out stars like flickering candles. Its lightning left clouds of dust where once were moons. Its thunder made even black holes tremble.”
That does not only sound scary but even powerful!