Marvel Comics is known for creating characters with distinct qualities. Comprehensive Marvel villains range and their immense powers play a significant role in setting Marvel’s image worldwide. Additionally, Some of the Marvel Villians have super strength while other villains rely on their quick thinking ability.

Many Villians updated themselves with unbreakable and unbeatable gadgets while others simply get a paint job and changed the aesthetic of their look. Let’s look at some of the most popular Marvel villain costumes which can hook on your mind.

Galactus appeared in a Marvel comic book “Fantastic Four #48” created by Stan Lee and Jack Kirby. He is a planet eater and a space explorer named Galan. Additionally, Galactus portrayed as a gigantic structure that blots cosmic energy from certain planets and stars to enhance his potential. Despite being Marvel villains, he has no curiosity for people and life. Moreover, he attains his size by passing over a star and joining powers with other knowing beings.

The dreaded Marvel villains used to wear a giant purple or pink mask that wraps the majority of his head and face. In addition, parts of the shield wrapped in blue, perhaps a chest piece like Iron Man’s Armor was also present. Also, if you are about the size of a Planet, you don’t need to regard yourself as fleshy. That’s the reason his costume was simple and effective.

Thanos First shows up in The Invincible Iron Man #55 and was created by Jim Starlin. He is considered the most powerful Marvel villain of all time. Thanos even crashed with several Marvel Heroes like, Avengers, Guardians of the Galaxy, X-Men, and Fantastic Four. Aside from a magical glove of Infinity stones and his obsession with Death, Thanos is a real gladiator of the galaxy.

Thanos can move anyone by his performance, and his attire enhances it.  He is armored with a blue bodysuit and his giant gold boots. Even his garb is blue, and his protective helmet helps him protect from Thor’s hammer shot and Hulk’s smashing fits.

Dr. Doom initially made his appearance in The Fantastic Four #5 and was created by Jack Lee and Jack Kirby. Doom is a master in dark side and magic. Additionally, he was the ruler of Lavretia, extremely intelligent Marvel villain and a thorn in the side of Marvel Heroes especially, Fantastic four.

Doom’s extra Special armor converts him into a superhuman as it shoots a laser, flies and also provides the force field. His titanium armor is a nuclear-powered and computer aided battle suit. His armor is not only made of strong metal but also covered by his trademark green hook and Cape. No doubt he is considered as one of the best Marvel Villian.

Magneto was initially appeared in The X-Men #1 and created by Stan Lee and Jack Kirby. He is the pillar of strength in Marvel’s world and sway’s any device that can be magnetized. Magneto can move metals and even produce electromagnetic powers.

Magneto’s red and purple attire makes him noticeable in the reader’s eyes. His large purple cape bluster in the air whenever he operates his powers. Besides all, his red helmet made him a handsome devil, and even works as a safeguard. Additionally, his helmet also assists him in mind control from interfering sinister attacks.

Doctor Otto Octavius, or Doc Ock, at first appeared in the comics The Amazing Spider-Man #3 and created by Stan Lee and Steve Ditko. Octopus is one of the genius marvel’s mind and can be considered as a mad scientist. However, his wrong experiment transformed him into  Marvel’s villain. He is especially known for his enmity with Spiderman, even is a founding member of the Sinister Six, a team of Spider-Man’s bitter enemies.

Initially, Octopus was a point-sized and tubby man who used to wear glasses. Later, when he turned immoral, his metal equipment implants his body and gives him tentacles forever. He generally has an orange and green jumpsuit and uses his four mechanical arms to clamp Spidey and aide in his shenanigans.

Apocalpyse aka En Sabah Nur originally came up in X-Factor #5, created by Louise Simonson and Jackson Guice. Besides, he is on the list of most dangerous Marvel’s Villian due to his superhuman strength and High intelligence. Being the Firstborn mutant, his powers are endless. He is one of the few immortal Marvel villains.

Apocalpyse’s armor is usually all blue, with red thrown often. He also has the letter A on his belt and on his neck collar. His large suit fits his enormous frame and can be used to reestablish mutant powers. His color scheme gives his personality a great appearance with his blue skin.

Loki, the “God of Mischief” and the strongest Marvel villain. The modern-day incarnation of Loki initially appeared in Journey into Mystery #85. He is the adopted son of Odin and sibling of the superhero Thor.

Loki’s main outfit is usually green and yellow, with big bendy horns on his helmet, and a long yellow cape. This attire enhances his personality to the topmost level.

Dark Pheonix or Jean Grey’s character initially appeared in X-Men #135. Initially, Jean Grey is one of the greatest mutants with telepathy powers. But her combination with Pheonix makes her unique Marvel’s Villian. She even defeated Galactus. Pheonix converted into an evil character when she accidentally kills people and soaks up nearby star’s energy.

In Jean’s grey configuration, she has a blue and yellow outfit. Whereas, her Pheonix form is a lot of green, yellow, and red. Her costume is a majority red bodysuit (sometimes green too). Dark Pheonix has yellow/gold sash, with long yellow boots, and gloves, and Pheonix symbol of the same color. Her attire succeeds in catching the reader’s eyes.

Taskmaster is one of the dreadful Marvel Villians. Master’s ability to copy and imitate the enemy’s battling style undoubtedly helped him combat several Marvel Heroes including, Captain America, Spiderman, and Black Widow. Furthermore, Taskmaster first arose in The Avengers #195 and was created by David Michelinie and George Pérez. 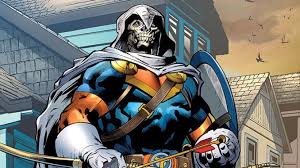 Taskmaster has one of the unique and precise looks. Not only he has a sword and shield but also arbitrary weapons like bow, arrow, and guns. Master’s attire constitutes of Blue, Orange, and white color. Even his mask resembles the skeleton, which creates a stunning look on his personality.

Green goblin is an overly dominant Marvel Villain who initially appeared in The Amazing Spider-Man #14. Further, this character is much more than his explosive knapsack of pumpkin bombs and aerodynamic glider. Additionally, Green Goblin has the most prominent costume in the whole Marvel world. In contrast, Norman Osborne’s experiment went out of the wood and results in the appearance of the Green Goblin,  from the ashes of Oscorp.

Goblin used to impair a classic purple top with gloves and boots of the same color. The rest of his outfit is green, especially his iconic mask, and his outfit outright the villains’ identity.

Marvel’s Villians stand out from the crowd due to their unusual and beautifully designed attires. Their outfits did justice to their enormous Personalities.