The pinnacle of mankind, the paragon of humanity, the protector of Gotham, Batman is undoubtedly one of the greatest comic-book heroes of all time. Widely popular, the Dark Knight is the shining example of turning your deepest trauma into your greatest strength. Having lost his parents at the age of 8, Bruce Wayne used all his resources, wealth, and wits to fight crime in the city of Gotham. An embodiment of rage and pain, Batman however shows extraordinary restraint when it comes to violence. His moral code to never kill has made him one of the greatest comic book icons over the past decades. However, the Dark Knight somehow seems to forgo his moral code when it comes to animals. 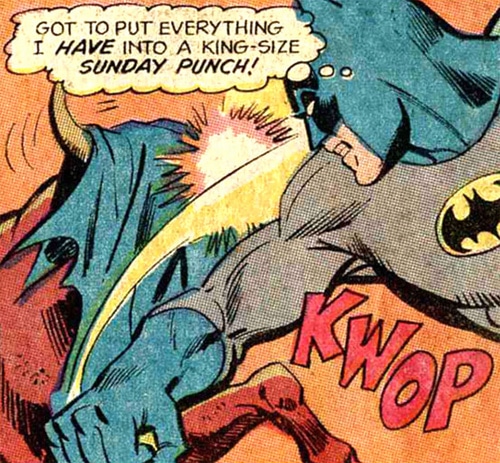 In the comics, Batman has faced overwhelming threats and emerged victoriously. Though an inspiration for millions of kids, the Dark Knight won’t really be liked by PETA when it comes to his encounters with animals. Here, we have compiled a list when Batman mercilessly beat animals to a pulp. 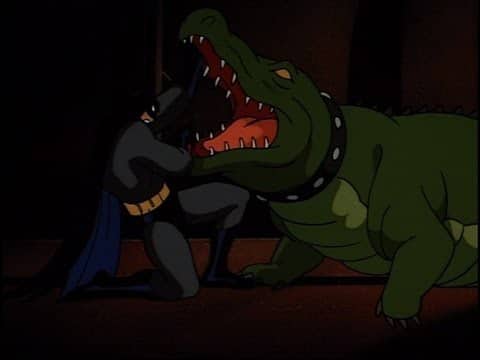 When Batman is not busy beating Killer Croc for the hundredth time, he casually snaps real crocodiles to horrifying deaths. In Batman: The Animated Series, the Dark Knight fights the Sewer King in the episode ‘The Underdwellers’. As Batman investigates a series of crimes committed by ‘leprechauns’, he finds out that the leprechauns are in reality, orphaned children. As an orphan himself, Batman gets really pissed off and finds the Sewer King who has put the poor kids for such crimes. To protect himself, the Sewer King unleashes his pet crocodiles on Batman. Sadly, the crocodiles face the wrath of Batman as he smashes two of them and breaks the jaw of the third one without any remorse. How did that part air on television for a show catered towards children?

Batman never uses alcohol or any substance (at least not knowingly) to maintain his peak human conditioning. However, the Dark Knight did get high on a rare flower toxin which was illegally grown by a married couple. The toxin made Batman hallucinate. On top of that, the couple thought it would be a nice idea to let killer falcons loose on Batman. Though Bats was trippin’ like hell, he still remembered his training. When the falcons attacked him, he swiftly kicked one in the face. He also bundled one in his cape and violently smashed it against a concrete wall. In his defense, Batman was trippin’. However, the smashing part was a bit over-the-top.

8. Befriended a Horse By Punching It 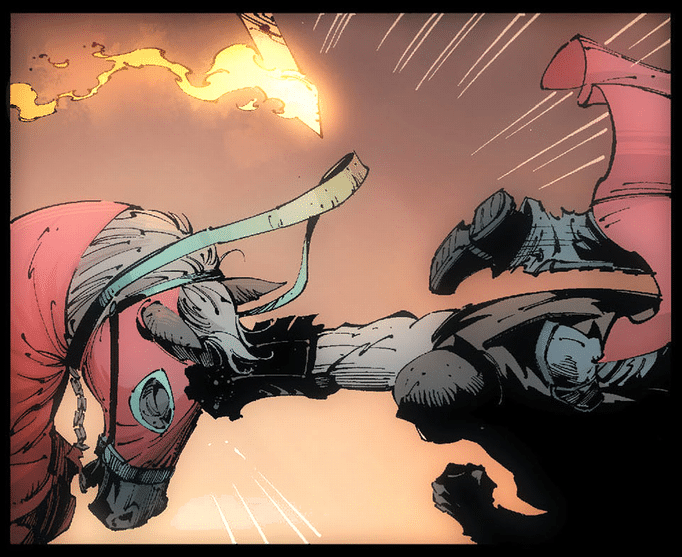 In Death of the Family, the Dark Knight befriended a horse in the most surprising way possible. In the comics, Batman entered Arkham Asylum to stop the freed inmates from raising hell. After sweeping down scores of dangerous inmates within minutes, the Dark Knight was attacked by an inmate riding a horse. However, Batman was in no mood to entertain the lone warrior and instead punched the horse. The punch was so powerful that the horse turned his friend on the very next page. 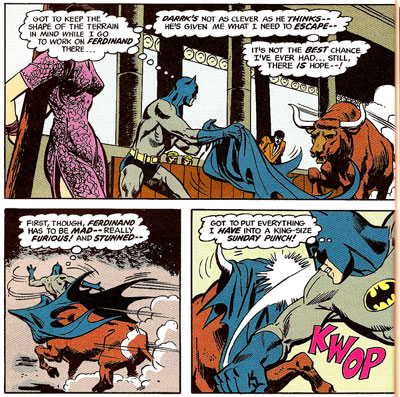 In Batman’s adventures of punching animals in the head, Ferdinand the bull became the Dark Knight’s prey. Taken captive by Darrk, both Batman and Talia al Ghul find themselves in a dangerous situation. As part of Darrk’s sadistic plan, Talia is tied to a pole in the middle of a bull-fighting arena. After letting a ferocious 2-ton bull loose, Batman is given the chance to flee or save Talia. But being the hero Batman is, he jumps in to save Talia. After distracting the bull using his cape, he named the bull Ferdinand and punched it straight in the skull. As the bull was stunned with such immense force, the Dark Knight goes a step further and calls it a hamburger.

6. Snapped a Wolf In Half For a superhero who uses vengeance quite a lot in his monologues, Batman limits himself to breaking bones and rupturing less vital organs. But when it comes to animals, it’s pretty much fair game for the Dark Knight. In Batman and the Mad Monk, Batman is attacked by two vicious and bloodthirsty wolves. He subdues one into a brutal submission. However, the second one manages to sink its teeth into Batman’s thighs. Unflinchingly, Batman thrashes the wolf on its head with his lunchbox sized fists. After blinding it with pepper spray, Batman shows the wolf why it was a bad idea to bite him. He grabs the wolf and mercilessly beats it around on the concrete walls. And then, he finishes it off by snapping its spine in half.

In Batman & Robin Adventures #4, Batman found himself fighting the symbol of America itself, Bald Eagle. In the comics, Penguin frees all the birds from Gotham City Zoo. Though it is obvious that the Penguin must have had some ulterior motive to his plan, surprisingly, he just wanted to free the birds from their cages. In a weird role reversal, Batman became the tyrant who wanted to put all the birds back in their cages. In his confrontation with the Penguin, the Penguin unleashed two Bald Eagles on him. To protect himself, Batman swiftly punched a Bald Eagle in its face to submission. For a guy who took inspiration from an animal, he is not quite friendly to them it seems. 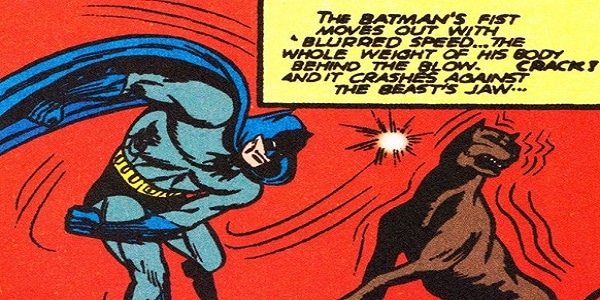 In Christopher Nolan’s The Dark Knight, Christian Bale’s Batman gets injured by vicious Rottweilers more than knives or bullets. As a result, the Dark Knight had to use violence against the cute but lethal dogs. Apparently, the scene didn’t sit well with PETA. In the comics, Batman went a step further and knocked out a dog (he had it coming though) with a swift punch. In 1941’s Detective Comics #52, Batman is attacked by a particularly dangerous dog threatening to shred Gotham’s finest into bite-sized pieces. However, the Dark Knight did not have any qualms with showing the dog its place with a swift punch to the face.

3. Batman Killed a Shark With Handcuffs 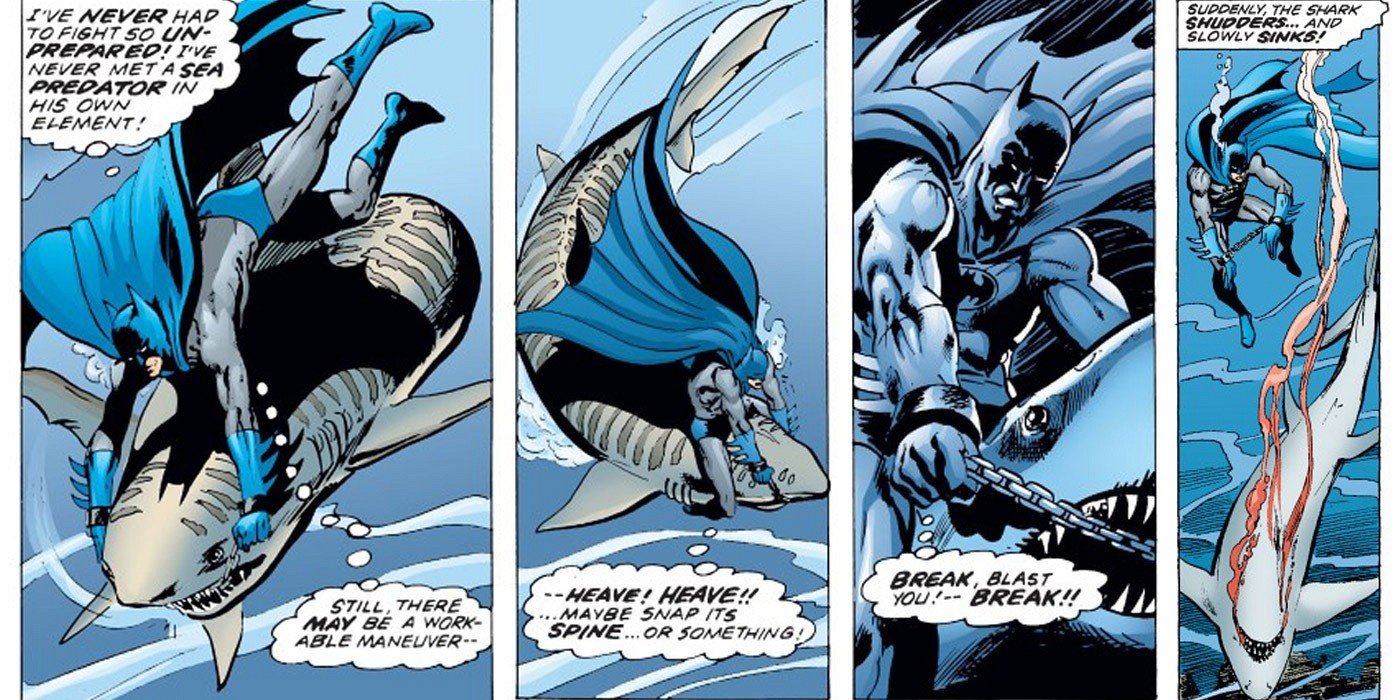 As a part of Joker’s elaborate sadistic plan, an old man tied to a wheelchair was set to be dropped into a tank having a shark. As the Joker was pretty pissed about his former gang members for ratting him out, the old man was allegedly a member of the gang too. However, the Dark Knight arrived just in time to save him. In a deal with the Joker, Batman took the place of the old man to let him live. Once the Dark Knight was thrown inside the tank while handcuffed and tied to a wheelchair, he was attacked by a shark. But in usual Batman’s animal-cruelty style, the Dark Knight gutted the shark with his handcuffs, broke the tank using the wheelchair, and came out unharmed.

2. Lit a Bear On Fire and Rode It Off a Cliff 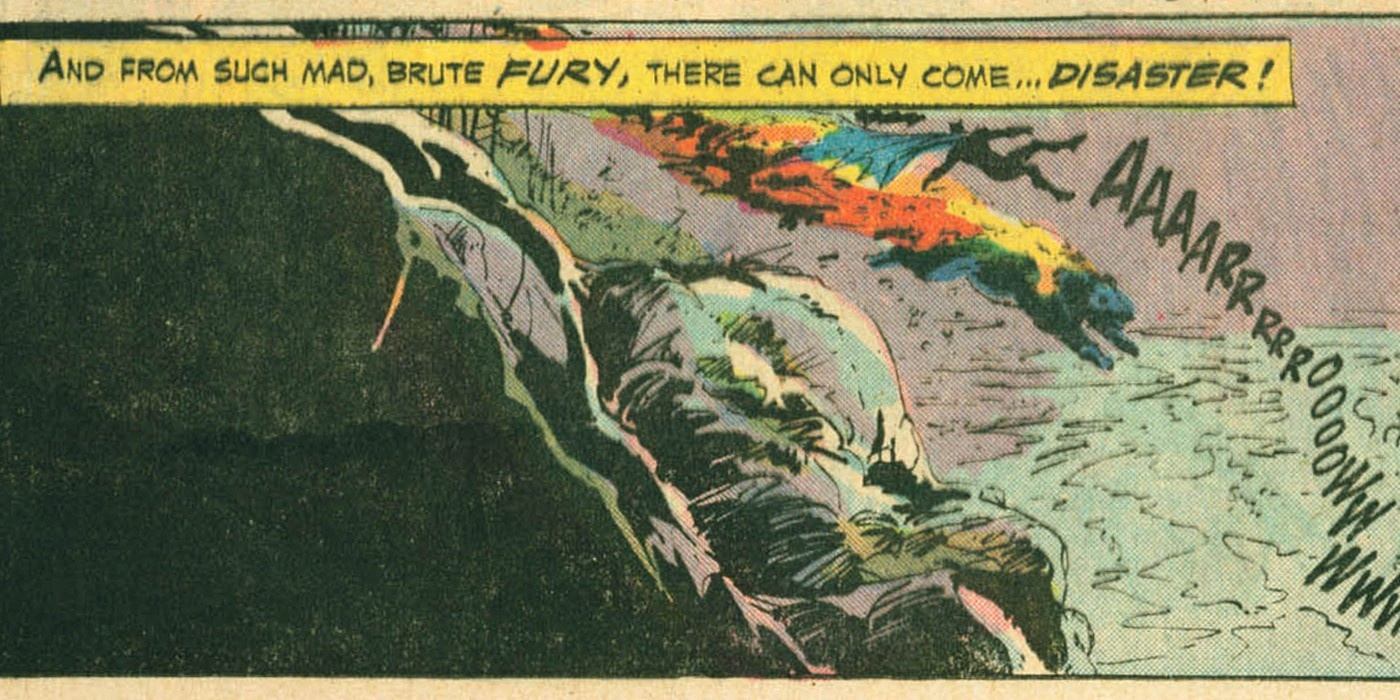 In another episode of Batman mercilessly bullying animals, a poor bear became the Dark Knight’s prey. In Detective Comics #440, the Caped Crusader saves an innocent waitress from a bunch of inbred hillbillies. It turned out the waitress was their sister and they wanted her back to sacrifice her. As Batman found out that the sacrifice was meant for a vicious bear, instead of taming it or reporting to animal authorities, the Dark Knight took the matter into his own hands by viciously beating and setting the bear on fire. Afterwards, he rode the burning bear off a cliff. Needless to say, the bear fell to his death.

1. Killed His Own Symbol With a Dart

Though Batman’s behavior with animals is not his best, this incident is straight-up crazy. In other instances, the Dark Knight has defended himself or his closed ones by attacking animals. But how do you explain a dead bat attached to a dart? In Detective Comics #43, the Dark Knight alerted his presence to a few crooks by throwing in a dart through a windowpane. Disturbingly, the dart had a bat attached to it. Thank god for Batarangs in later editions.