Are your favorite superheroes really the best humanity has to offer? Do they represent the greatest of morals and ideals? Are they as pure and unstained as you think they are? We believe otherwise. This list proves it. 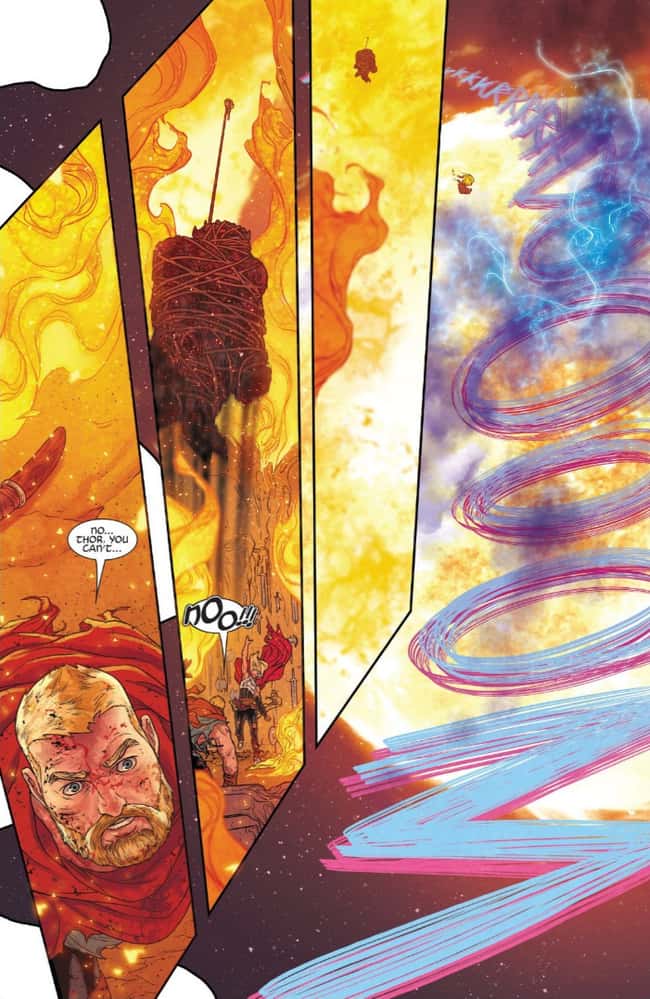 Jane Foster inspired a lot o folks with her short but impressive stint as Thor, Goddess of Thunder. Many Asgardians, including Odin, were against Jane Foster becoming the new Thor. she proved them all wrong when the Mangog attacked Asgard. The Mangog is the zenith of all cruelty and anger against the Gods. It is the manifestation of everything Gods do not stand for. And not even Odin had the answer to defeating this beast. Jane Foster used her Mjolnir to send the Mangog into the sun. But Mjolnir also was destroyed in the process. The mystical hammer was the only thing keeping Foster alive. Foster died saving Asgard but she also defeated her greatest foe before her final breath. 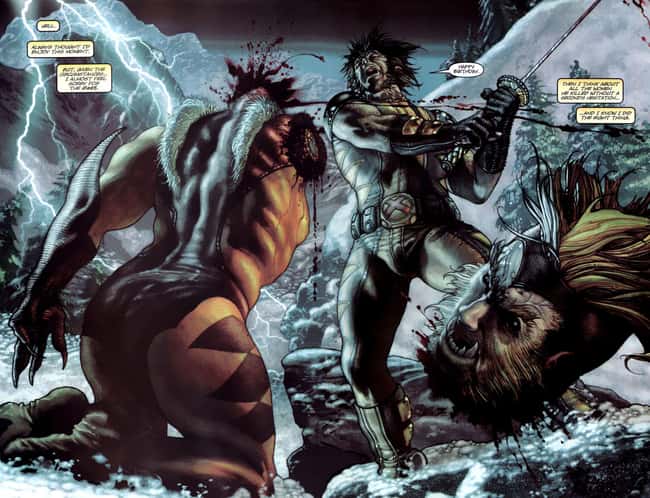 Wolverine and Sabretooth are linked via blood as well as fate. Both have crossed paths and claws with each other. Due to their exceptional healing factors, both the feral mutants are near immortal beings. So their rivalry dates back to centuries. While Logan was in Japan, a skilled swordsmith used a part of Wolverine’s soul to create the Muramasa Blade. The Muramasa Blade can cancel out healing factors of superhumans. After Sabretooth went on a rampage, Wolverine retrieved the blade from Cyclops. He then beheaded Sabretooth in cold blood, taking him out for good.

Superman Kills Doomsday, Himself Dying In The Process 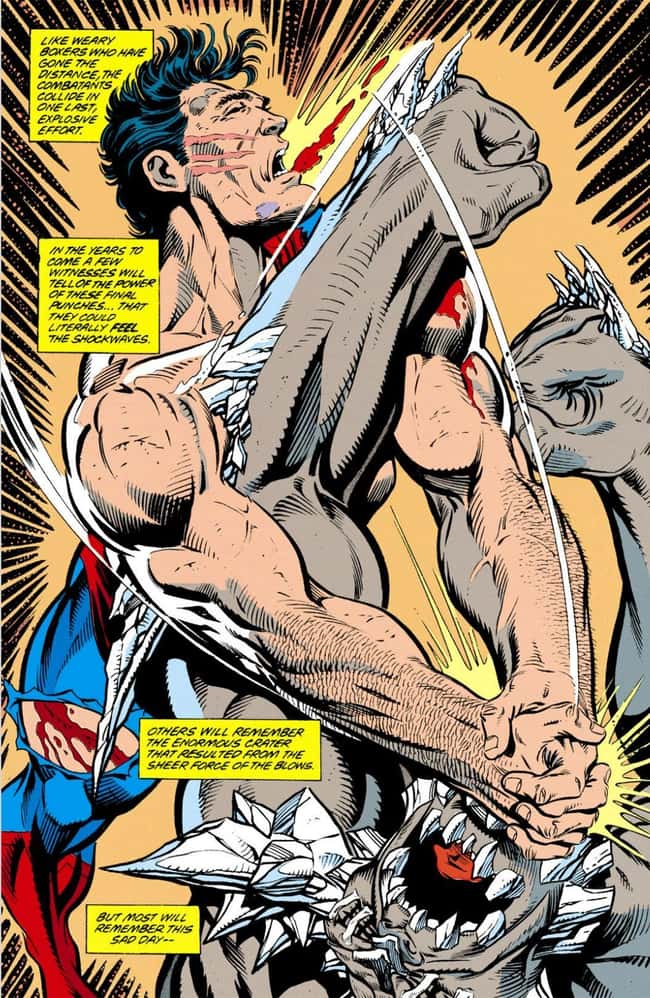 In the Death Of Superman, the Man Of Steel comes across his toughest foe yet. Doomsday is an experiment done by a mad scientist in his quest to find out a cure for death. doomsday was killed countless amounts of times and then resurrected again. Every time he came back to life, he would be immune to the way in which he died the last time. The creature is effectively invincible since nothing could kill him. His fight with Superman was a classic example of an unstoppable force meeting an immovable object. Superman did kill Doomsday but the strain on his body was too much. Kal-El perished after the fight.

You May Also Like: Marvel Has Revealed The Final Poster Of The Last Episode Of Falcon and the Winter Soldier 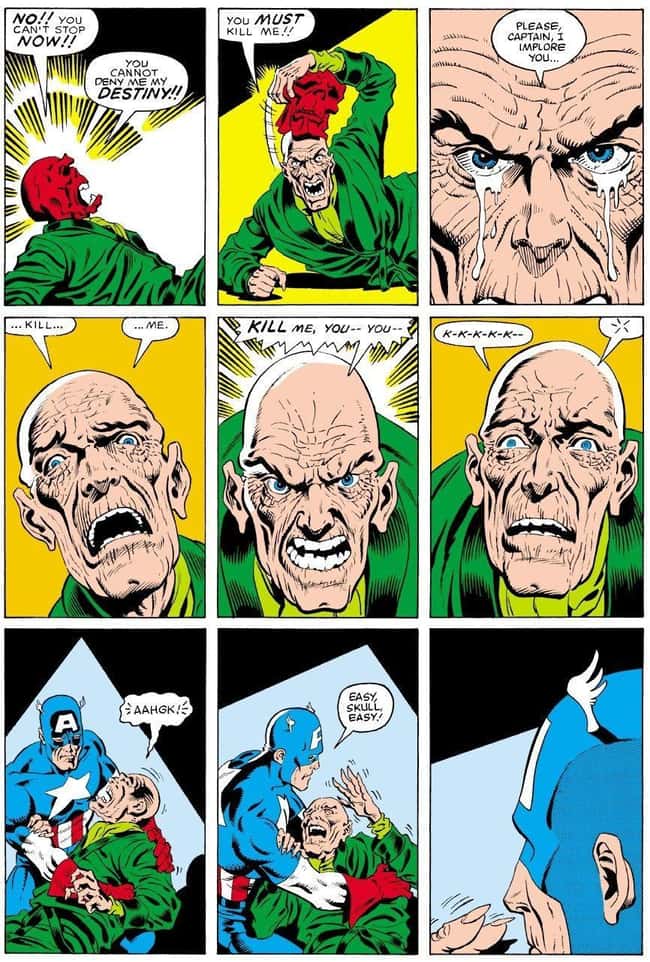 We would not hold Steve Rogers totally responsible for Red skulls’ death here. But he was partly responsible for letting it happen. there are several versions of the Red Skull in Marvel Comics. The most evil version was a despicable Nazi who underwent cryogenesis when Cap went missing. he wakes up decades later to a whole new world. But unlike Captain America, Johann Schmidt’s body has already deteriorated to match up to his chronological age. The Red skull initiates one last fight. All he wants is a death glorious enough for him. Cap refuses to fight him but Schmidt fights him anyway. In the end, the elderly red skull dies of a heart attack, 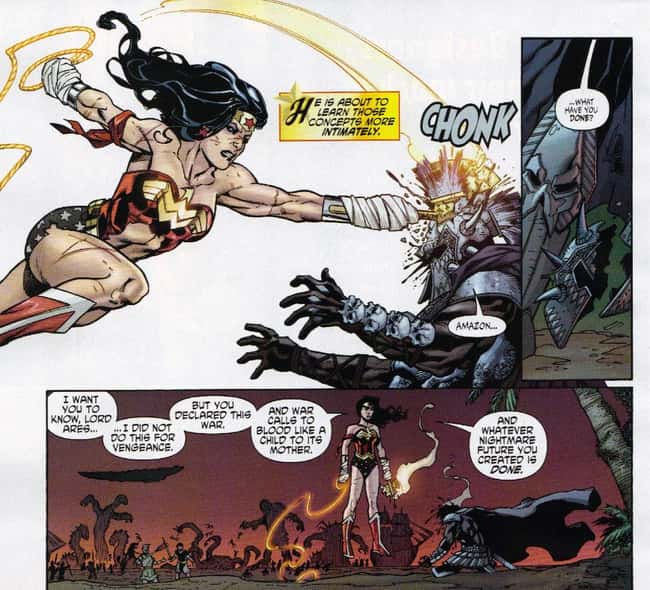 Wonder Woman has faced many Gods in her career as a superhero. But none of them have given her a run for her money like Ares, the Greek God of War. In Wonder woman #33, Ares crosses the line when he brings the fight to Themyscira’s beaches. Wonder Woman has had it. Ro stop spilling any more of her fellow Amazons’ blood, s he takes a battle axe and goes straight for Ares’ head. Diana slashes Ares’ head in two with the axe, ending the fight right there. But like all divine entities. Ares eventually resurrects himself. This time though he is cautious of Diana since he knows the woman can kill him.

The Batman Ends The Joker In The Killing Joke 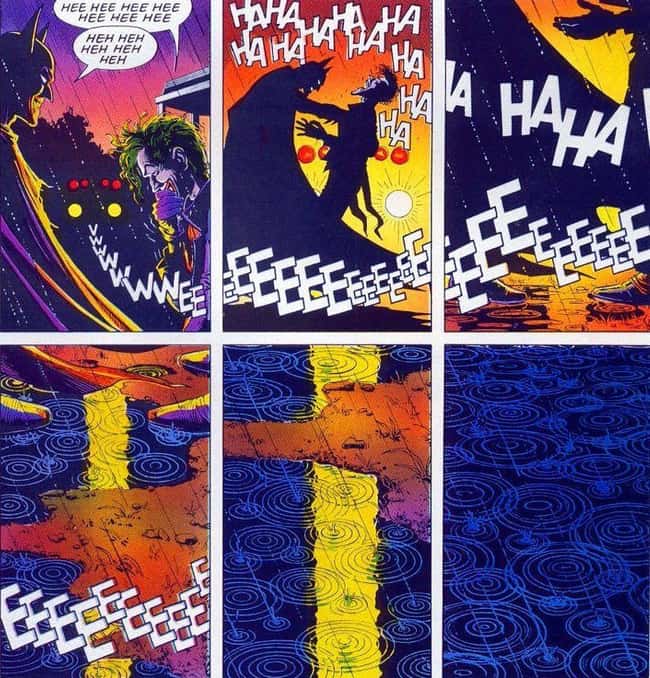 The Killing Joke is considered one of the greatest comic book arcs of all time. It fleshed out Batman and the Joker as well as their strange relationship in ways we never thought was possible. It also happens to be quite the controversial comic book arc. The controversy is not just about the graphic nature of the story. The final few scenes, according to Grant Morrison, were about Batman reaching out for Joker’s neck as both share a laugh. The Joker’s screeching laughter suddenly comes to a halt. There’s a line of light in the end that disappears in the final shot, signifying Batman has finally crossed the line he had vowed never to. 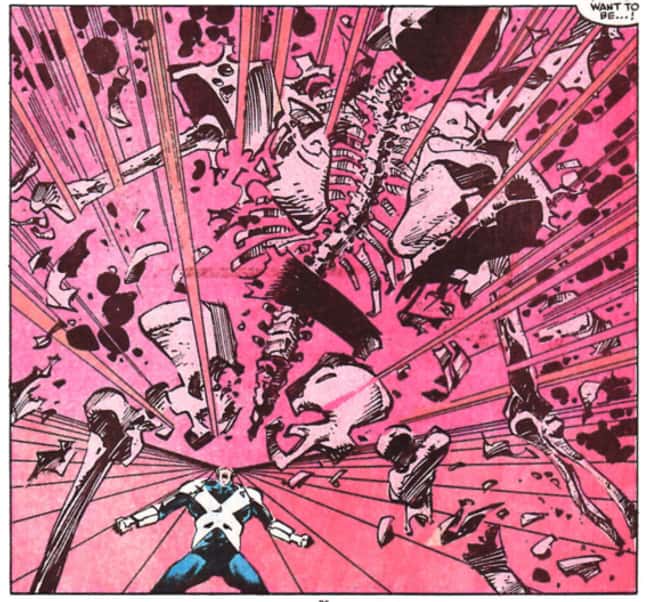 It is quite uncommon to find somebody like Cyclops on this list. The X-Men does not necessarily have an arch-nemesis, right? WRONG!! Cyclops does have a foe who is obsessed with him and his wife Jean Grey. We are talking about Mister Sinister, the geneticist who has experimented on mutants and the X-Gene since time immemorial. In X-Factor #39, Sinister threatens he is going to kidnap Cyclops and Madelyne Pryor’s (a Jean grey clone) child. This doe snot bode well with Cyclops. Scott Summers blasts the super villain to smithereens in a fit of rage. Mister Sinister quickly returns from the dead since he has mastered the art of cloning. 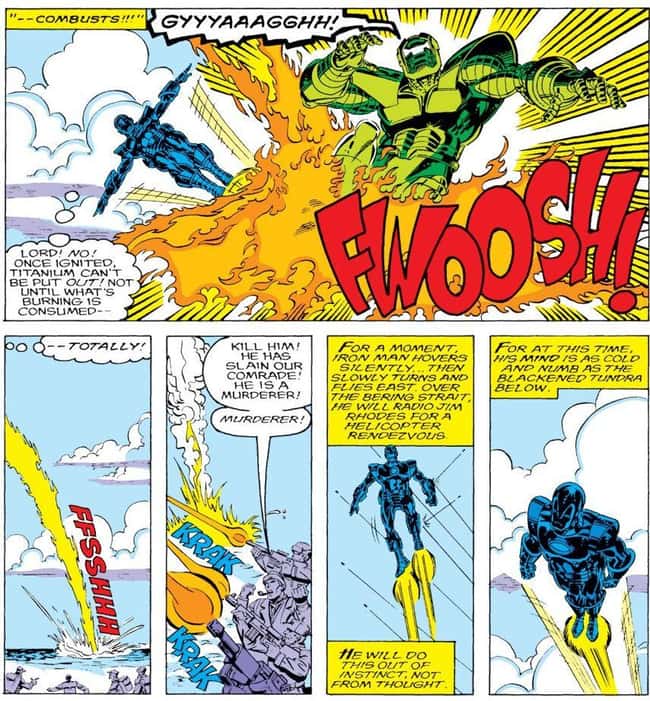 Iron man is not generally seen as someone who is a fan of lethal justice. But during the Armor wars story arc, Stark, one of the smartest men on earth, found himself in a soup. While having a fight with titanium Man, a long-time Iron man foe, Iron Man does the unthinkable. He makes Titanium Man’s suit overheat and traps the person inside. Unable to get out, Titanium Man literally melts to death. The act is so inhumane that the Avengers decide to kick Iron man out of the team. This incident remains a stain on Iron man’s legacy for a long time.

Also Read: 10 Things That Fans Don’t Get About The Marvel Movies

The Flash Manhandles The Reverse Flash To Death 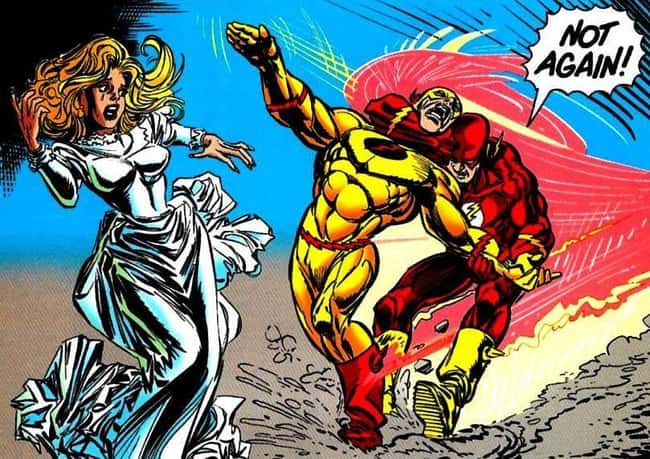 There is no villain as perfect as an anti-thesis to a superhero like Reverse Flash is to the Flash. Using the Negative Speed Force, he has plagued Barry Allen for literally all his life. Barry Allen’s first love, Iris West, was killed by Eobard Thawne. Thawne decides to do the same to Fiona Webb, Barry’s second wife. The Flash is fed up with the Reverse Flash’s shenanigans. The Flash uses the Speed Force to catch hold of the Reverse Flash just in time before he manages to kill Fiona. In the process, Barry holds him and drags him away so tightly that Reverse Flash dies in an instant. This leads to the classic The Trial of Barry Allen story arc.

Daredevil Stabs Bullseye With His Own Weapon, Leaves Him To Bleed Out & Die 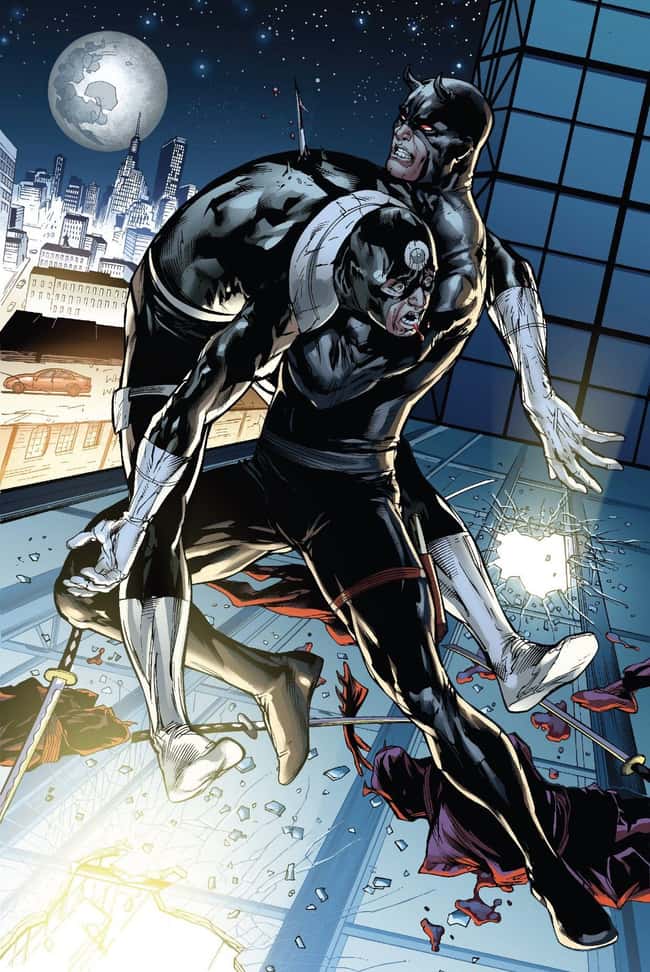 Daredevil’s most traumatic experience as a superhero was when Bullseye killed Elektra right in front of him. Elektra died in Matt Murdock’s arms. Years later, Daredevil finally manages to return the favor. The Devil of Hell’s Kitchen is possessed by a demonic entity known as the Beast. he now leads the Hand. After confronting Bullseye, Daredevil uses one of the villain’s own weapons to stab him in the same fashion he once did to Elektra. He then lets the villain bleed out and die, only to resurrect him later under the control of the Hand as a master-assassin.