From the very start, “Civil War II” guaranteed hero vs. hero action just like its predecessor. The opening saw a  beloved longtime hero die in the opening, and Marvel Comics guaranteed that that hero’s death would not be the last. In this week’s “Civil War II” # 3 by Brian Michael Bendis and David Marquez, Hawkeye was faced with a near-impossible choice, one that led to the death of one of Marvel’s earliest and most popular characters.

Bruce Banner had actually gone almost a year without becoming the Hulk. However, like readers, Banner understood it was possible that this phase would be short-lived. Banner entrusted Hawkeye with an arrowhead, one that might pierce the Hulk’s skull. He made Hawkeye promise him that Hawkeye would eliminate him if he ever transformed again. Safe to say, Hawkeye kept his promise.

The 1980s began on an edgy note with superheroes ready to eliminate threats, even other heroes. Killing off heroes “for the greater good” has now become uncommon by not unheard of in comic books. For instance, Green Arrow killing off Hal Jordan as Parallax or Wolverine Killing Northstar who was under the control of the hand. Here are 10 instances of heroes killing heroes “for the greater good”. 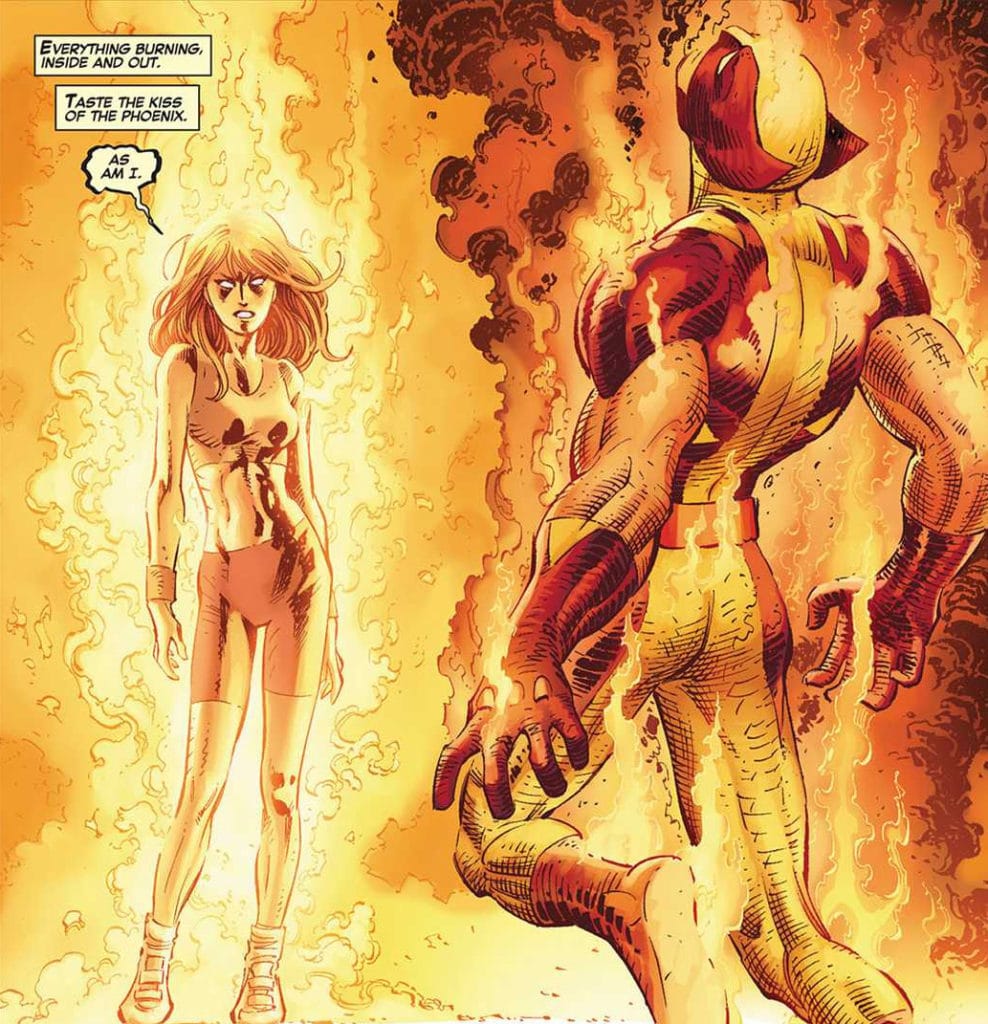 Rachel Summers was the child of Jean Grey from an alternate future. The evil mutant Selene killed someone close to her. Rachel sought revenge. Her plans were exposed to Wolverine thanks to a connection when she took a bit of his life essence. Wolverine tracked her down and advised her that would be cold-blooded murder. When she countered him, he popped his claws right into her. Thankfully, she didn’t die since she utilized her telekinesis to keep herself alive enough time to be recovered by Mojo’s Body Shoppe. The intent was there. We’re counting this. 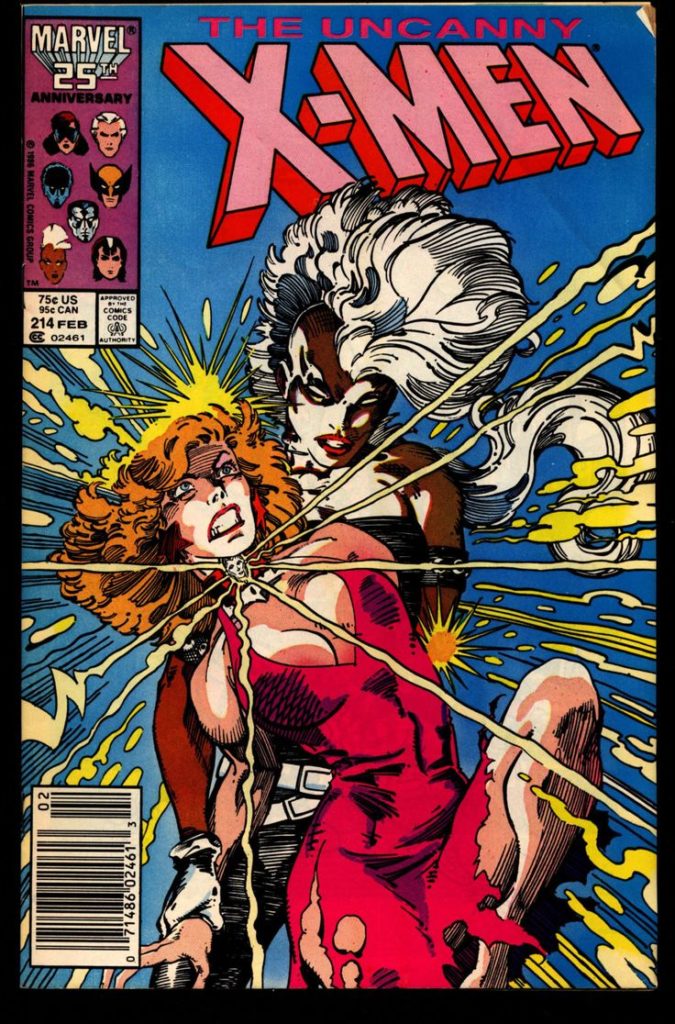 Exactly forty issues after Wolverine stabbed Rachel, the X-Men were in battle with the Prime Sentinel called the Master Mold, who had fused with the futuristic robotic called Nimrod and were losing. Rogue absorbed Colossus’ power and dropped like a cannonball onto the Master Mold to no effect. Dazzler wanted to blast the Master Mold through the wonderful Siege Perilous portal. This would also mean blasting Rogue through the Siege Perilous. Dazzler communicated her intent to Rogue via Psylocke telepathically and blasted them through the portal, apparently eliminating them both. Rogue, however, would return. 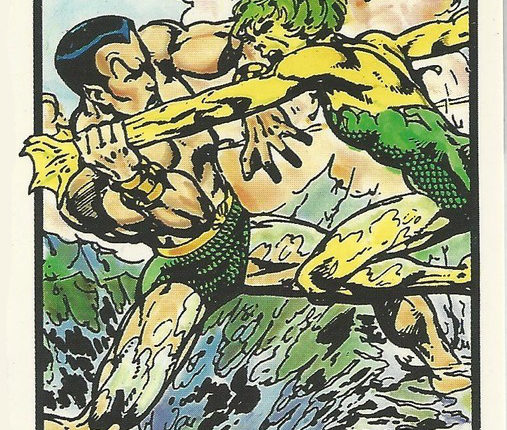 Marrina was a marine alien who served with Alpha Flight for a time prior to falling for Namor. The 2 were wed and she ended up being an honorary Avenger of sorts throughout her spouse’s period with the group. When she conceived, her alien DNA changed her into a huge sea monster called a Leviathan. Namor is forced to end her life, using the Black Knight’s ebony blade to do so. 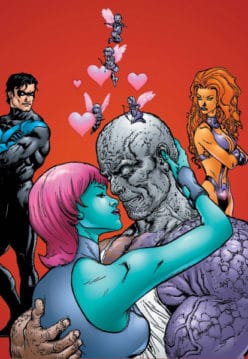 When Indigo initially showed up in the 21st Century, she was a badly damaged android from the future. When Arsenal formed the Outsiders, he asked the android (now called Indigo) to join them. She ended up being a key member of the group as well as developing feelings for her colleague Shift, a  piece of Metamorpho that gained sentience. She was exposed as the wicked Brainiac-8 designed and her Indigo character resisted and took control of her body once again. She then asked Shift to eliminate her and he agreed, providing her something she constantly yearned for: he transmuted her molecular structure into a human, eliminating her while doing so so she could die human. 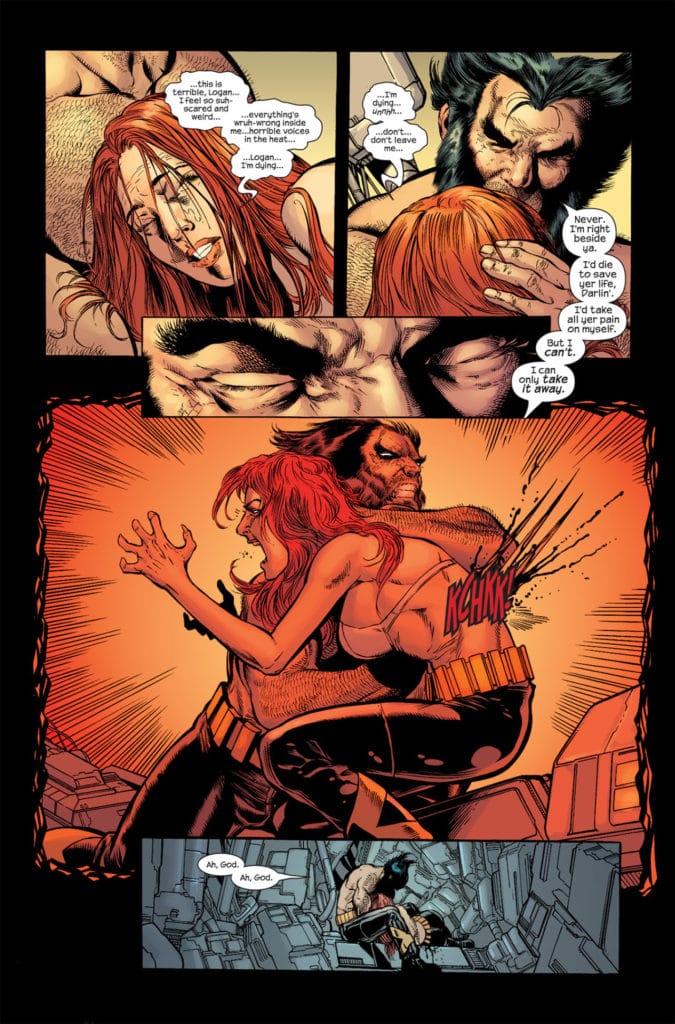 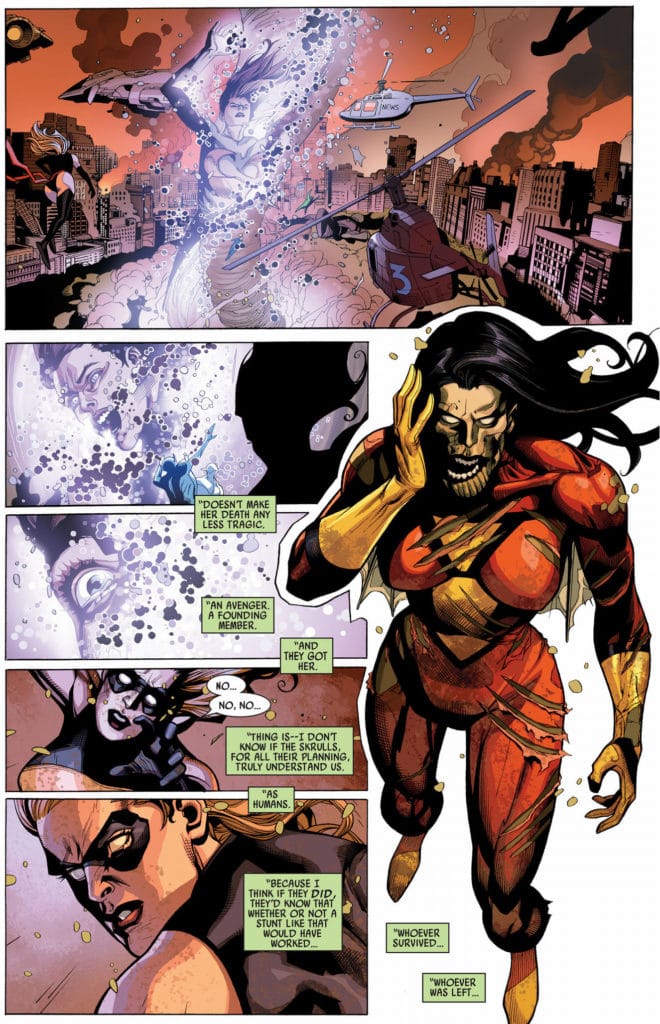 In the conclusion of this mega event, the superheroes were driving the Skrulls away from earth. The Skrulls, however, had an ace up their sleeves. A Skrull impersonating Yellowjacket called Criti-Noll had actually booby-trapped the  Wasp a formula for months, turning her into a huge bomb to eliminate everybody. Thor needed to blow her away in a vortex, eliminating her before she eliminated everybody else. 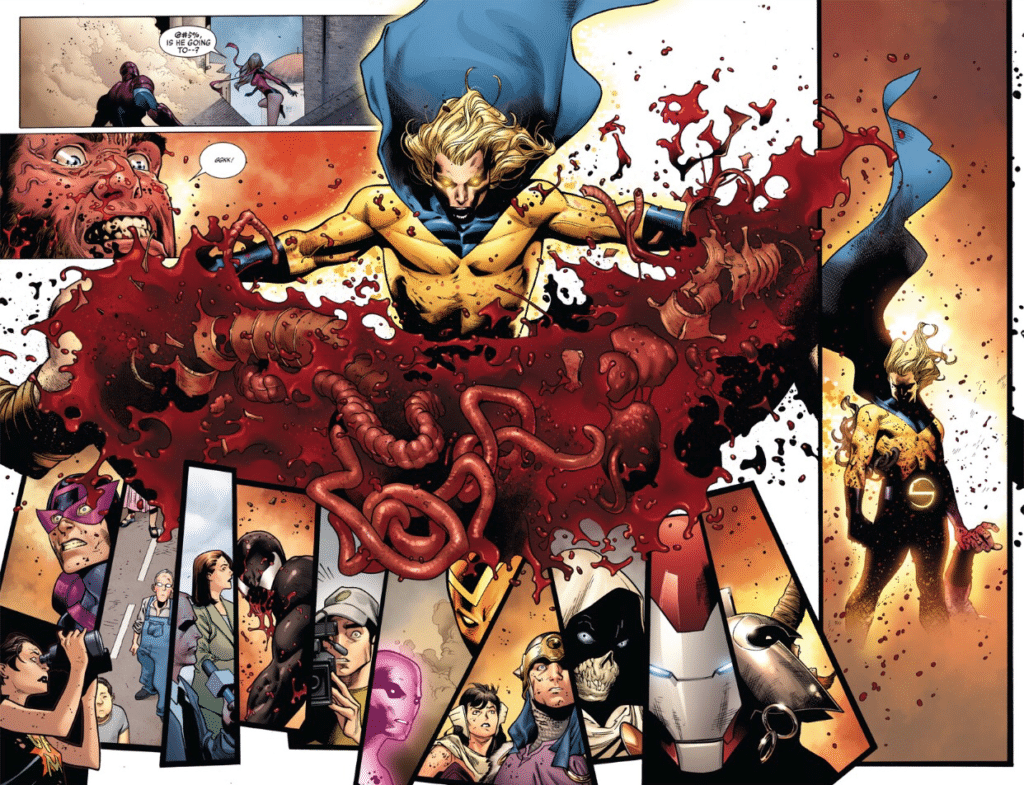 The Sentry is Marvel’s answer to Superman and Brian Bendis and Olivier Coipel’s Siege event that follows Dark Reign, all-out war ensues courtesy Norman Osborn’s machinations. It also sees the god of war, Ares, face off against The Sentry and it does not end well for Ares as he gets ripped in half by possibly the strongest of them all. 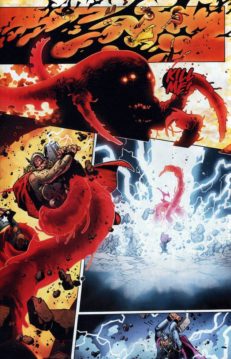 By the end of the “Siege” storyline, the Sentry was consumed by the deeper aspect of his soul/ being called the Void. He had actually destroyed Asgard as well as killed Loki. Eventually, after the heroes essentially dropped a whole helicarrier on him, he went back to his alter ego form of Bob Reynolds. He then pleaded with Thor and Iron Man, asking them to eliminate him. They declined, as they desired for him to stand trial for what he did as The void. Bob then mentioned that he wasn’t actually making a demand here, so he became the void, forcing Thor to kill him and Thor complied. 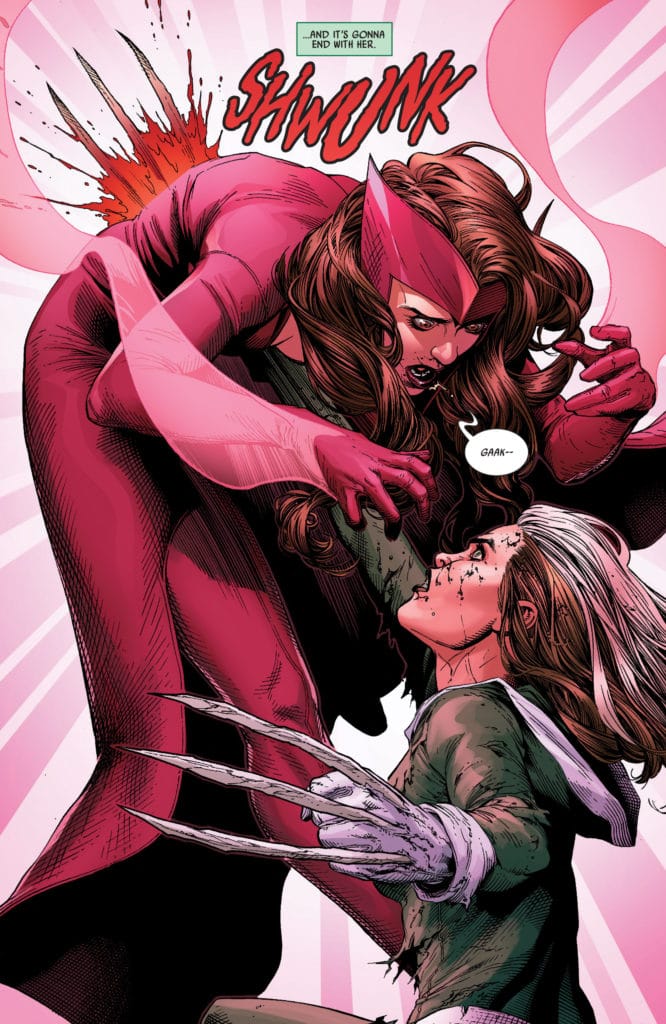 The Uncanny Avengers run was one that had the Red Skull Orchestrate events and try to usurp the power of the Scarlet Witch. Rogue felt she needed to do whatever was required to stop Scarlet Witch, even if it implied eliminating her with the claws she took in from Wolverine. All of this of course was because Rogue was manipulated by the Apocalypse twins. 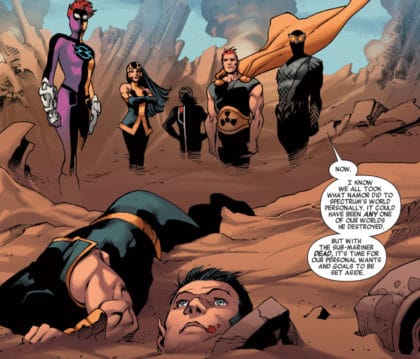 Namor made some choices in the interest of the “greater good” himself when he aligned himself with Thanos, Terrax, Maximus, and other villains. Their objective was to ruin other Earths in order to safeguard Earth- 616 from multi-dimensional “attacks.” The Squadron Supreme consisted of heroes who were survivors from various worlds damaged by attacks. In the very first outing of their series, exacted their revenge on Namor for his part in ruining multiple worlds. Hyperion razed Atlantis and promptly beheaded Namor.