Hawkeye’s character is a lot more diverse in the comic than it is in the cinematic universe (yet). He has not always been in the center frame of a movie, and neither has he got enough screen time like the other characters. Despite the limited limelight, the character has still managed to get into everybody’s hearts and has become a permanent resident there. His sensitive, very caring, and loving side has not been unnoticed by loyal fans. All such fans have created Hawkeye fanart that will blow your mind!

1. Always Ready To Take ‘Em Down

Hawkeye is known for his agility and swift movements. His arrows have never missed a single target. It was his skills that made Nick Fury hand-pick him into SHIELD. He is also known as one of the most skilled agents. He was chosen to be ‘The Man’ for numerous missions like the one in New Mexico and the destruction of PEGASUS. The art is surreal and shows his ‘ready to fight’ form.

Fans clearly love to see Hawkeye in action. Creating digital illustration is the best form to open one’s imaginative side. The next fanart/illustration’s detailing leaves the viewers in awe and was almost impossible for us to miss. A Malaysian artist/illustrator created it. He managed to perfectly recreate Jeremy Renner’s stance from The Avengers: Age of Ultron.

Natasha and Clint gave us all ‘friendship goals.’ The bond they shared was so strong yet so sensitive. The next fanart depicts just the same. It looks from the art that they have just finished fighting a war and glad that the other one survived. The grey background and the bruises on their bodies set the mood for post-war.

Good execution of a pencil sketch is sheer patience and focus. The outcome of a sketch we see is the result of controlled use and movement of a pencil. This sketch is just one of them. The artist has correctly detailed Jeremy Runner‘s face and suit; the symbol on his right and the arrows over his shoulder cannot be any better than this. It looks like the artist is self-taught and got this one right in her second attempt. 😉

5. The Fight For Soul Stone

This one still gets us teary-eyed, doesn’t it? The scene where they both fight for who should be sacrificing themselves for the soul stone got everyone sitting on the edges of their seats, biting their nails. It sure gave a twist in the stomachs of all the fans to see the end on Vormir. It showed their bond and got every fan wishing for a friend like them. Everyone must have secretly wanted Natasha to come back somehow. This art has beautifully portrayed this emotion the characters must have felt.

The comic universe already has two Hawkeyes, and now MCU is also introducing the second one. The other Hawkeye will be introduced in the upcoming Disney + show Hawkeye. She is an unrelated, sharply trained archer. In the comic books, she takes over Hawkeye’s title when he was assumed to be dead. Later, when they both discover each other, they form a partnership. They keep the title and take turns in fulfilling their duties. This fanart shows how the beaten Hawkeye passes on his baton to the younger Hawkeye.

The artist does a lot of line art. His exploration of Hawkeye’s one of the best moments is very apt. It was the first conversation he had with Scarlet Witch that really set off their relationship: “Okay, look, the city is flying, we’re fighting an army of robots… and I have a bow and arrow. None of this makes sense. But I’m going back out there because it’s my job.” Line art consists of straight or curved lines placed against a plain background, without gradations in shade or hue to represent two-dimensional or three-dimensional objects.

This artist, particularly, likes to draw MCU characters as fairies. Fanarts allows everyone to explore more about the character and imagine them in different forms. It is exciting to see how fans bring out different sides of the character and even give them newer abilities. This artist likes to believe that his speed equals the speed of a flying fairy. How would it be if all the characters were fairies and all the events happened in totally different surroundings? It makes us think, right? 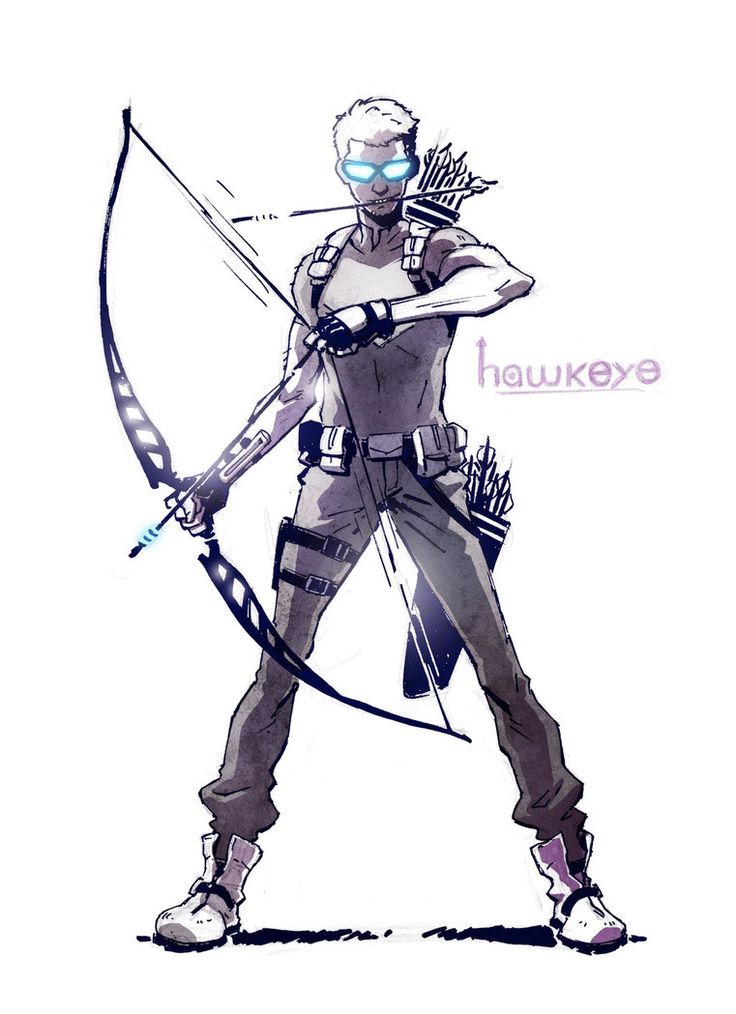 If the movies had a younger Clint Barton in the Avengers team, what would he look like? This fanart might be the answer to this question. Hawkeye looks so strong, vigilant, and so attractive. The artist has drawn two quivers, an arrow loaded in the bow ready to shoot, and another in his mouth. It depicts his readiness in any war-like situation.

After the announcement of Disney + new show Hawkeye, all eyes are on the young Hawkeye. Hailee Steinfeld will be playing the role of this Young Avenger. This art does justice to Hailee’s new look for the series. She looks as magnificent as an Avenger should look in their fighting suit. This fan art is going to excite all Hawkeye fans for the release of the new series.