If you love action, horror, and mystery all in one, then “Supernatural“ is for you. The creator of the show, Eric Kripke, originally visualized it as a movie. However, he decided to develop it as a TV show. The series has 15 seasons from 2005-2020. It stars Jared Padalecki as “Sam Winchester” and Jensen Ackles as “Dean Winchester”. The show is about two brothers following their father’s footsteps as hunters. They fight evil supernatural powers of all kinds including demons, monsters, ghosts, etc. The show got popular because it was well-written and the actors acted really well. The storyline was very interesting and original. The series had enough heartbreaking moments for the fans. So, here is the list of the scenes from the series that broke the fanbase’s hearts. Check it out!

Bobby Singer was played by “Jim Beaver”. He enters the series at the end of the 1st season as Winchester’s close family friend. After Sam’s and Dean’s biological father passed away, Bobby acted as their surrogate father. However, the good days didn’t last long for the Winchester brothers as Bobby passed away in the episode “Death’s Door” season 7. Sam, Dean, and Bobby manage to escape from Dick Roman but he manages to shoot Bobby. Before dying, Bobby manages to regain consciousness and calls the Winchester brothers “Idgits,” his term of affection for them. I’m not crying, you are.

Dean Winchester, played by “Jensen Ackles” is one of the lead characters of the series and appears in 327 episodes. He dies 11 times in the series. Yes, 11. However, in the season finale, Dean dies a real death. Sam and Dean finally defeat “Chuck” and gain control over their life. But sadly, this newfound freedom was short-lived. Dean was pierced by a sharp metal hook while on a hunt. The scene where the brothers bid final goodbye to each other was hard to watch. The episode is rightly named “Carry On“. 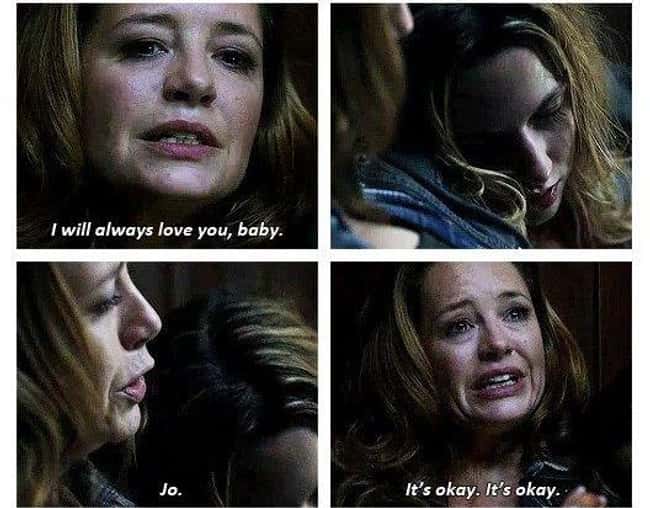 Ellen Harvelle is Jo’s mother. They shared a good relationship. Jo wanted to hunt, but Ellen wouldn’t allow her to do so. Eventually, Jo started hunting and Ellen joined her. The duo died in Season 5 Episode 10. Jo was helping Dean get away from hellhounds that were attacking them in a convenience store. Jo was heavily wounded while saving Dean from them. Ellen couldn’t see Jo perish away as she had no reason to live without her. So, Ellen decided to blow the building with explosives. This way the duo managed to kill the hellhounds and help the Winchester brothers escape. Sadly, the series lost this beautiful mother-daughter duo.

4.  Dean Breaking Down After Sam’s Demise

In the 2nd season finale, “Jake” kills Sam. Dean’s world is shattered. He felt his only responsibility was to save Sam, but he could not do so. Sadness turned into rage and he felt he had no reason to live. Dean got Sam’s body home and mourned. At this point, Dean heads off to trade his soul for Sam’s resurrection. He decides to rather live in hell than living without his brother Sam.

The moment when Dean died in the Season Finale, was heavy for all of us. So imagine Dean’s real brother going through the pain of losing his loved one. Although Sam goes through the same routine, the only difference is, this time he is doing it alone. Sam enters Dean’s room and cries his heart out remembering him. We felt your pain here Sam.

6. Castiel Declaring His Love For Dean And Sacrifices His Life For Love

Castiel is played by “Misha Collins“. In Season 15, Episode 18, “Despair“, Castiel and Dean were being pursued by Billie, who plans on killing them. Castiel understood Billie’s true intentions. Hence, he decided to sacrifice his life to save Dean. He remembered that Empty will take him the day he experiences true happiness. So, he confesses his love for Dean in his monologue. Dean was stunned by this revelation and asks Castiel to not leave him, but he places his hands on Dean’s shoulders and pushes him aside as the Empty arrives to take him and Billie. Thus, saving Dean’s life by sacrificing his with a smile.

7. Dean Telling Sam About What Happened In Hell With Him

At the end of the 3rd season, Dean was sent to hell. We never thought he would open up about his experiences. However, in Season 4, Episode 10, Dean shares it with Sam. Demon Alastair tortures him a lot. Dean tells, Alastair only stopped in one condition- that Dean would torture other souls for 10 years. Dean agreed and admitted that he ripped apart countless souls for over 10 years. This deed was haunting his existence. Dean started weeping while confessing to Sam.

8. Dean Wanting To Go Into The Ma’lak Box

Dean decides to put himself in the Ma’lak box forever so that Michael cannot possess him again. However, Sam tries to persuade Dean not to take this step and “Believe in Us”. To convince Dean, Sam literally punches him in tears to get him back in his senses. Finally, Dean senses reality and Sam’s love for him that he is convinced not to seal himself in Ma’lak box. This emotional drama was a lot to take!

Lisa is Dean’s love interest and is Ben’s mother. The trio shares a loving relationship until the point when Lisa is possessed by a demon. In Season 6, Episode 21, “Let it Bleed“, they plan to perform an exorcism on Lisa. However, the demon stabs Lisa before that. Castiel arrives to heal Lisa in the hospital. Dean asks him to erase Lisa and Ben’s memories so that they don’t remember Dean and are out of danger. Castiel does so. When Lisa and Ben recover, Dean goes to bid them farewell. However, he is left shattered when they don’t recognize him. Well, it is really hard to leave a person you love. I bet this scene made all of us emotional. 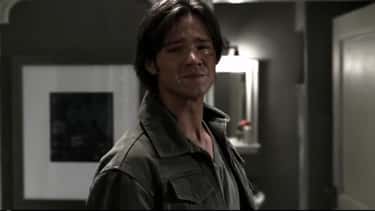 In Season 2, episode “Heart“, Sam and Dean try to save Madison from a werewolf. Sam started to developed feelings for Madison and feels that he has found someone to be with. However, Madison was a werewolf herself. She begged Sam to kill her so that she does not kill innocent people. Sam felt helpless but puts Madison down. Seeing Sam this emotional, Dean couldn’t help but weep. Well, if we were in his place, we would have cried along with Sam. After all, taking the life of your loved one is a big deal. 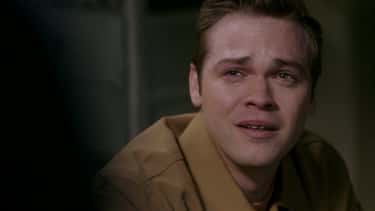 Jack and Mary are parents to Sam and Dean. In Season 15, Episode 13 “Destiny’s Child“, Jack regains his soul and has memories of whatever he did when he was soulless. He was a sweet and gentle guy. However, during his soulless days, he killed Mary, his own wife. Recalling this incident, he cries a lot and apologizes to the Winchester brothers for taking away their mother from them. Jack also sought forgiveness for his act. This episode was really impactful.