Currently, none of us can stop discussing about Shang- Chi and the Legend of the Ten Rings. It is a first Marvel movie in a while that is ONLY in theatres, here are some minute details , which most of us would have missed!

1. The Ten Rings Logo is now updated and includes Chinese Characters; making it clear that the previous one seen in MCU movies probably belonged to imposter organizations. 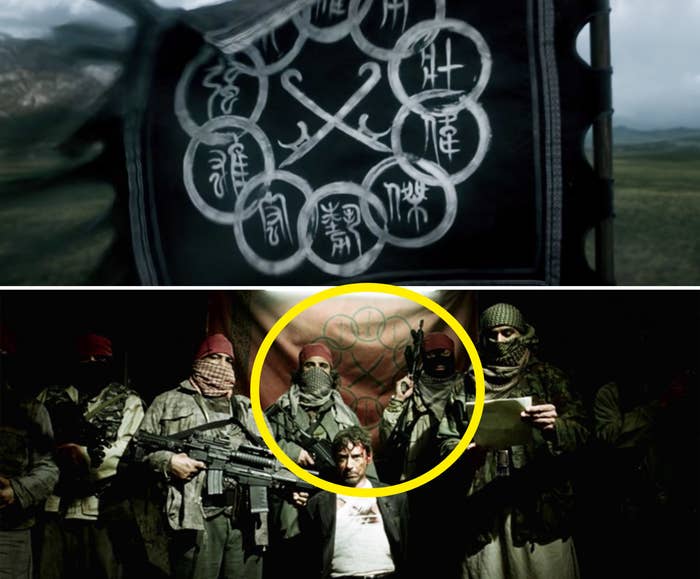 2. The cinematographer for Shang- Chi; Bill Pope also did the cinematography for The Matrix, and if you watch it keenly, there are some similarities between the two movies. 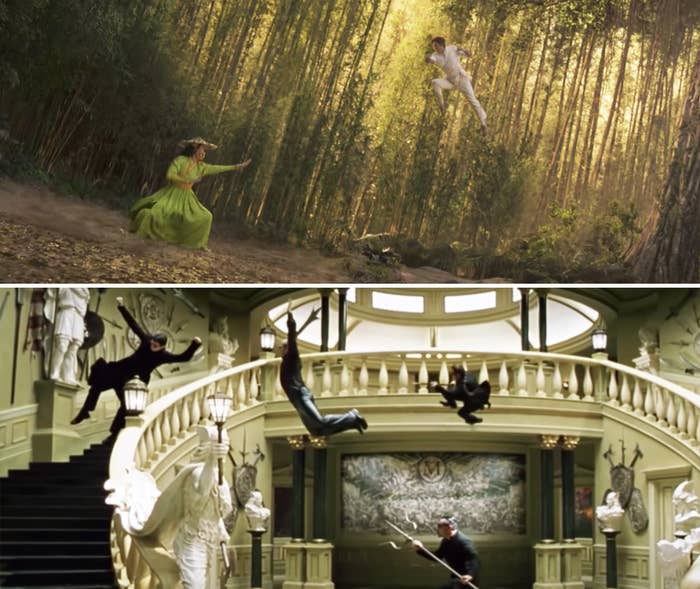 3. Shaun aka Shang- Chi, has some iconic posters in his bedroom and from what we could get a good look, they include Kung- Fu Hustle, The Godfather and The Warriors. Great Taste Shaun! 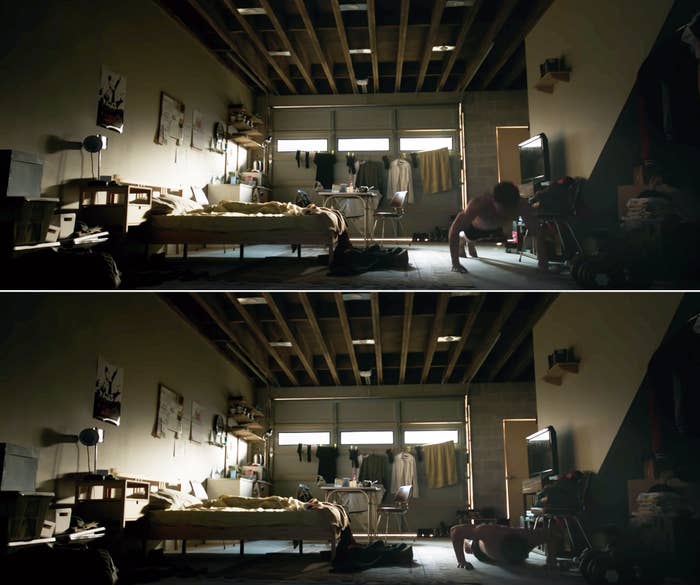 4. Razor Fist who battles Shang- Chi on the bus later joins the fight in Ta Lo is based on a Marvel Comic book character. In the comics, Razor Fist fights Deadpool and Wolverine too apart from Shang- Chi 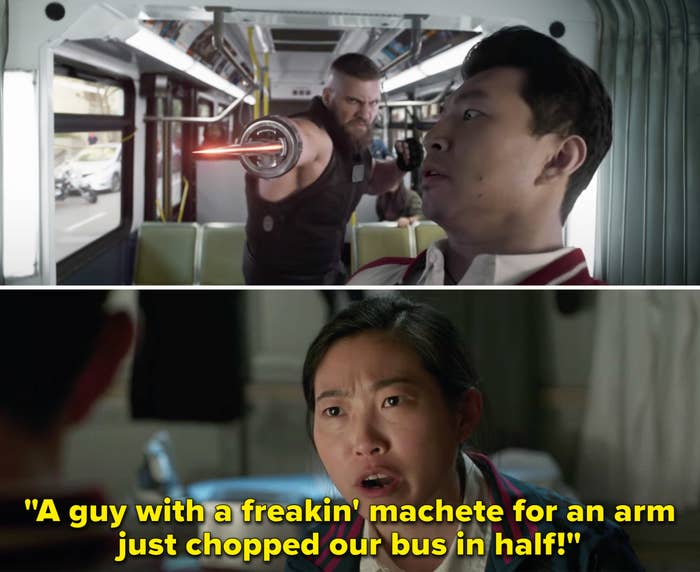 5. During the bus fight, Shang- Chi is seen using his jacket as a weapon, which is a tribute to Jackie Chan. It is a similar move to the one Jackie famously used in Rumble in the Bronx way back in 1995 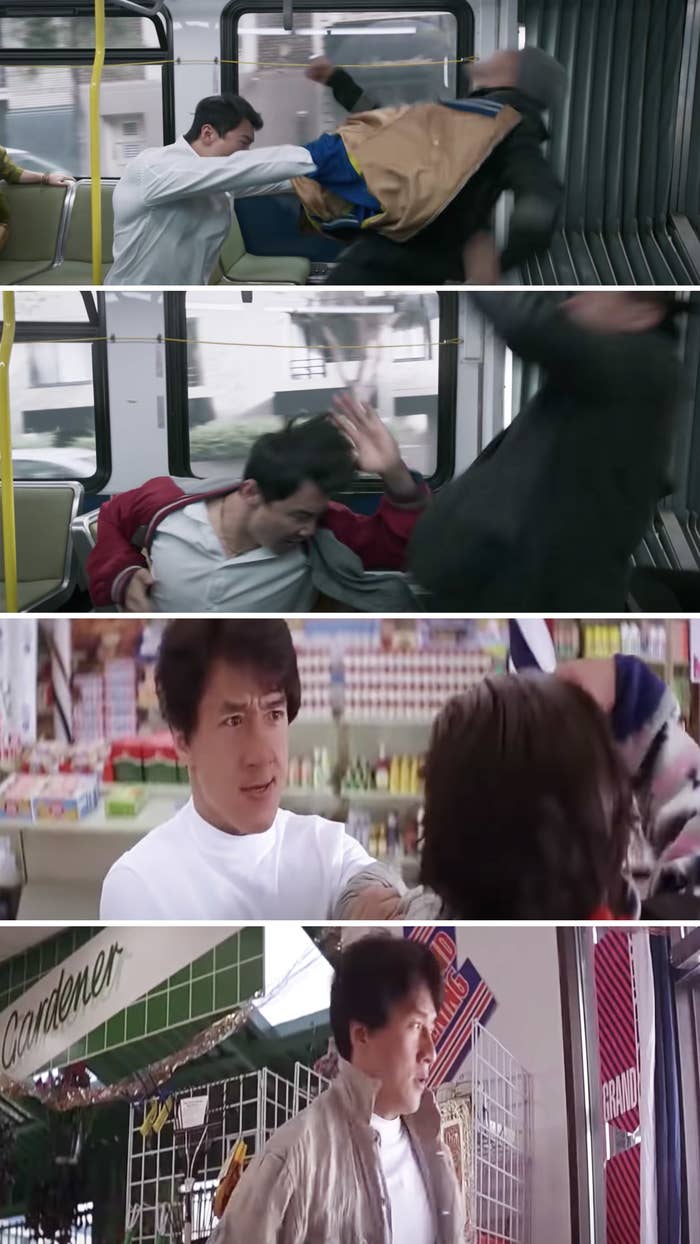 6. The fight club has many Easter eggs. You can spot a Widow- like Natasha and Yelena fighting what looks like one of the Maya Hansen and Aldrich Killian’s Extremis soldiers from Iron Man 3 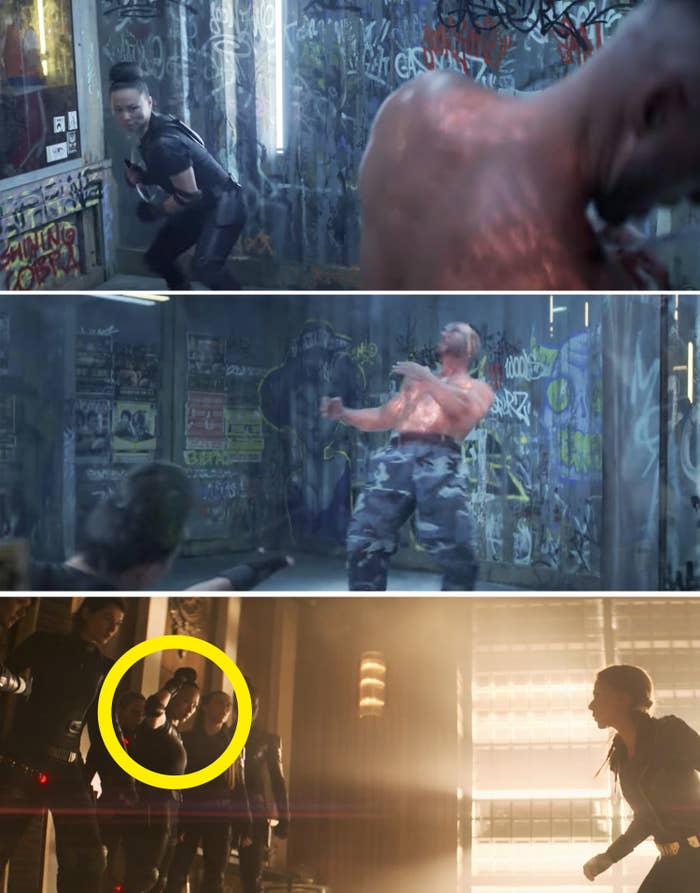 7. In the fight club, you can also see what looks like the Madripoor flag painted on the walls behind Shang- Chi. Madripoor was featured in The Falcon and the Winter Soldier. 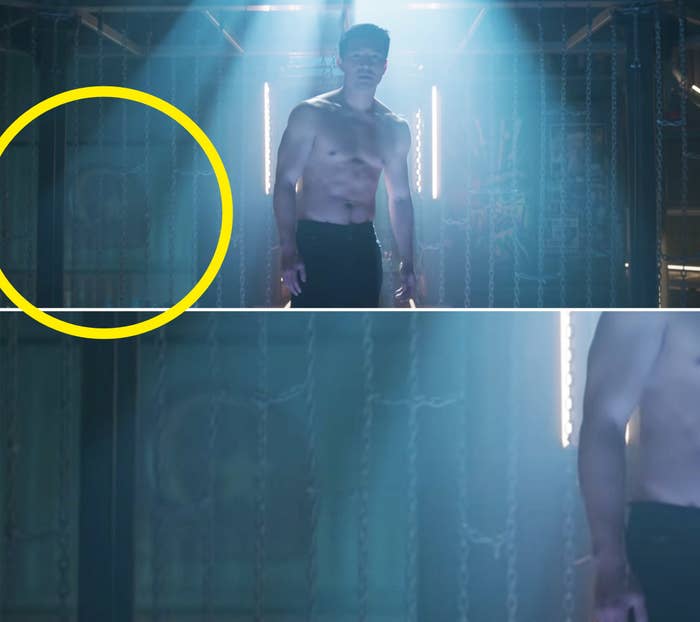 8. Scene where Katy is hanging off the side of a building and pole begins to crack, is a similar to a scene from Rush Hour 2 where Lee and Carter in similar situation 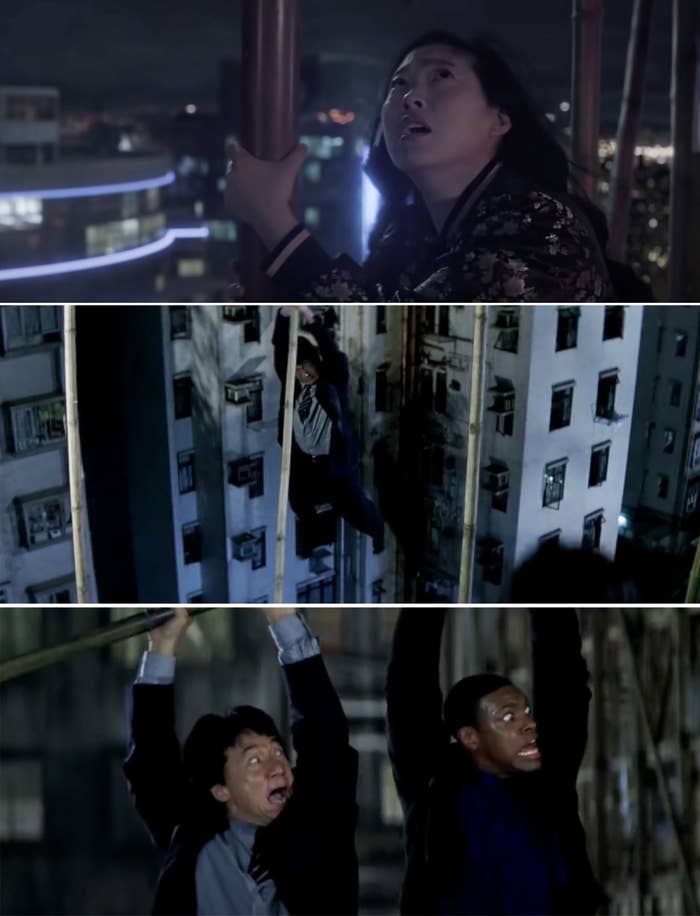 9. Dragons play an important role in Shang- Chi. The movie is set in 2024; after the events of Avengers: Endgame, and the year 2024 would be the Year of the Dragon 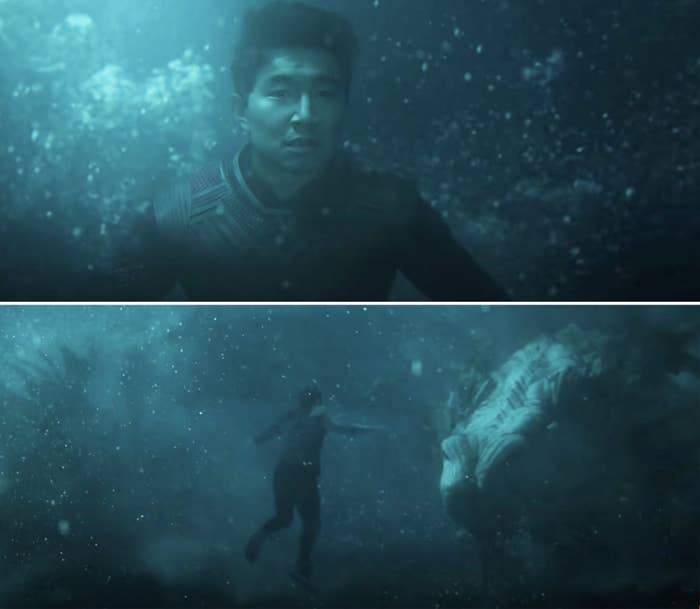 10. The lion- like creatures who assist the Ta Lo villagers in fight against the Ten Rings are a hint at the Guardian Lions aka Shishi which are often featured in Chinese architecture 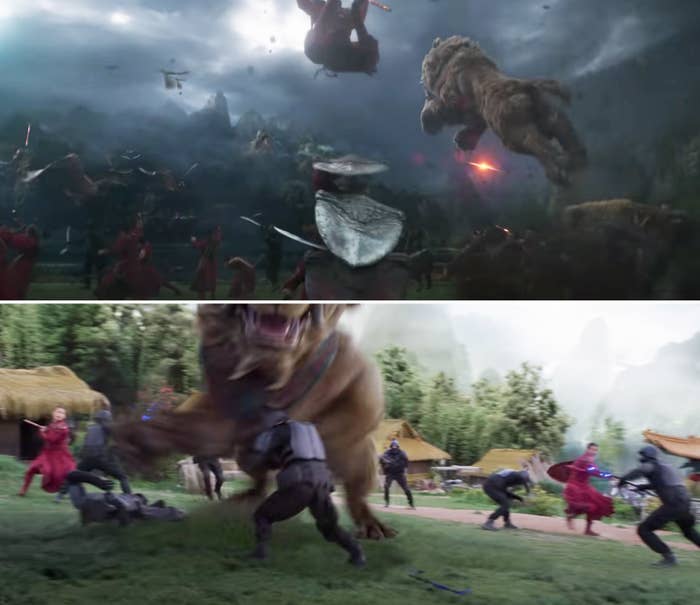 11. Ying Nan narrates about the Dweller- In – Darkness and how Ta Lo has stopped it from being unleased on the world. According to the comics, The Dweller has the ability to create fear in any living being and that is how he gains his powers 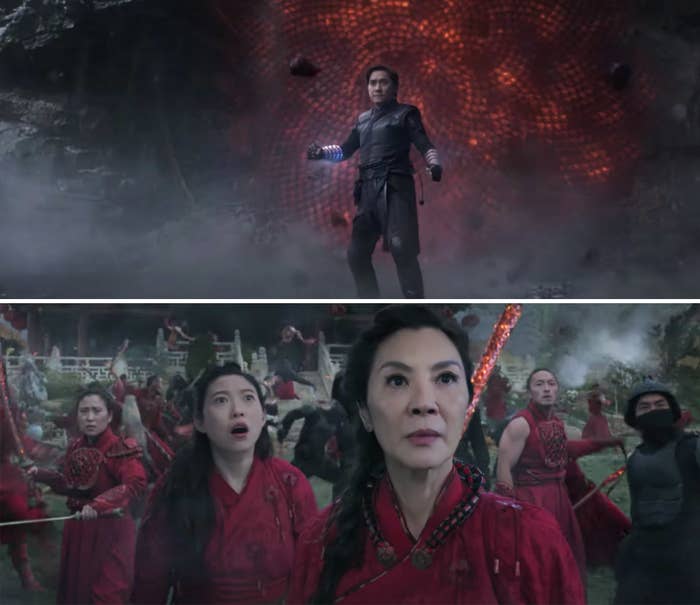 12. The Dragon Scale armor that Shang- Chi’s mom leaves him is a hinted to his comic book outfit; which looks extremely similar and is also in read colour! 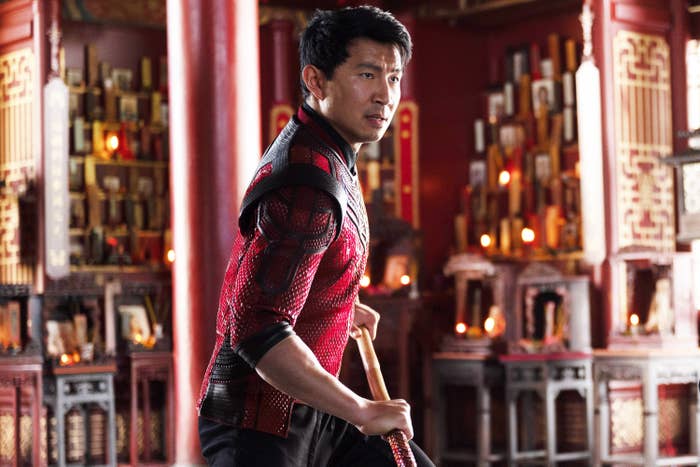 13. Carol and Bruce are seen talking to Wong, Shang-Chi and Katy using the same hologram tech they used in Avengers:Endgame while communicating with Natasha 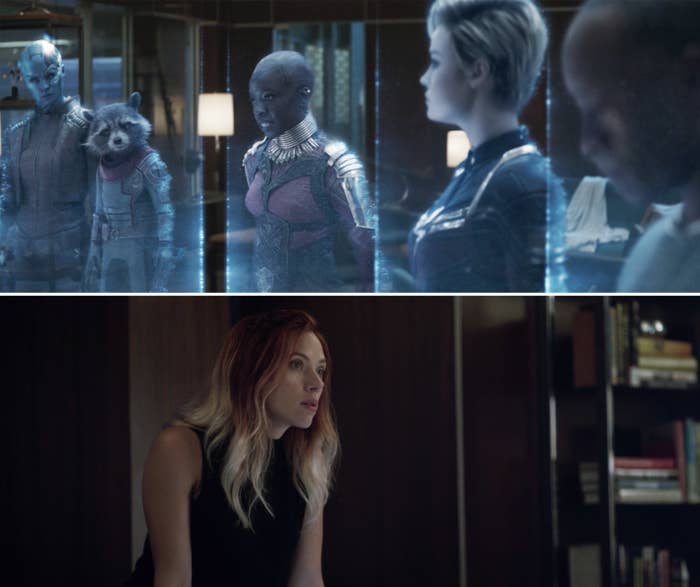 14. Last but not the least, Bruce is no longer Professor Hulk, however we can see that his arm is STILL in a sling which is likely from the time he used the Infinity Stones in Avengers: Endgame