It’s been almost a decade since the final Harry Potter movie was released. Created by J.K. Rowling, Harry Potter became a global phenomenon with its seven critically acclaimed novels and eight blockbuster movies. For many of us, Harry Potter is synonymous with our childhood, as the books and the movies utterly dominated the 2000s era. While the fans of the books expected a few more details from the movies, nonetheless, the trio of Daniel Radcliffe, Rupert Grint, and Emma Watson ensured that Harry, Ron, and Hermione become truly immortalized. Related: Harry Potter: 15 Most Interesting Facts From The Books That The Movies Missed Out On!

Interestingly, the year Harry Potter and the Deathly Hallows Part 2 was released, a social media platform for movie fans named Letterboxd was also made open to the world. Nearing almost a decade, Letterboxd has become a widely popular platform where fans from all across the world share their thoughts on their favorite movies. Ms. Marvel star Iman Vellani had revealed her Letterboxd account when she was cast as Kamala Khan for the show.

So, what happens when two of our favorite things come together? Harry Potter reviews on Letterboxd! Here are 26 funniest Letterboxd reviews of Harry Potter movies that will make you rewatch the movies for the hundredth time!

25. If You’re A Slytherin, You Probably Hated Dumbledore 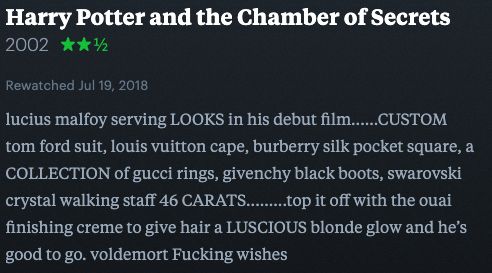 21. Everyone Had A Crush On Tom Riddle

20. Salazar Slytherin Was Definitely Messed Up

Related: 19 Facts From The Harry Potter Books That Were Never Mentioned In The Movies And You Probably Don’t Even Know About Them

18. Hermione Punching Draco Is My Meditation

Related: Harry Potter: 5 Times Draco Malfoy Proved He Isn’t A Villain (& 5 Times He Was A Hero)

16. Yeah, What’s Up With Expelliarmus? 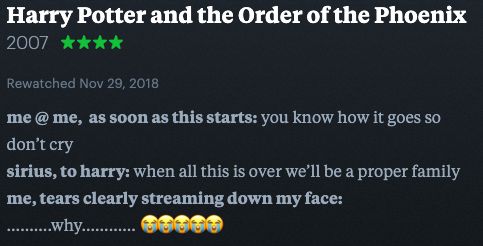 12. The Malfoys Never Got Over Their Goth Phase

11. Dumbledore Is The Worst Team Player Ever

10. Would It Have Hurt To Give Ginny More Depth?

8. It Was Surely Disturbing 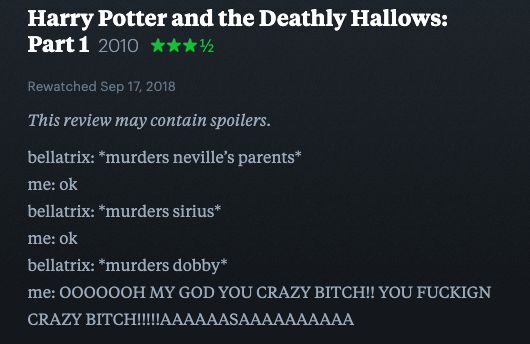 Related: Which Harry Potter House Does These MCU Characters Belong To

Related: Related: Brilliant Small Details That You 100% Missed In The Harry Potter Movies