If you haven’t yet joined the numerous online series that the MCU has been cranking out since January, this episode of the animated series What If…? is a wonderful place to start. In the episode, Chadwick Boseman reprises his role as T’Challa for the final time. As Boseman sadly died in August 2020. As we taught last week, the idea of What If…? focuses upon the numerous possibilities. The premise of What If…?, as we learned last week, revolves around the many possibilities that exist in a multiverse and how different events would have unfolded if one element was changed. Yondu arrives on Earth, but instead of leaving with Peter Quill, his people unintentionally bring T’Challa with them. It is he who, in the end, becomes the Star-Lord, whom the entire galaxy adores. Thus, we at Animated Times, after watching the second episode of “What If…?”, are here with a complete breakdown and a few hidden details that you might or might not have known about. Sounds interesting? If yes, then let’s hop onto the list and find out what these details are.

27. First, the opening of this episode mirrors the opening scene from Guardians of the Galaxy, where Peter goes to Morag to steal the Orb, aka the Power Stone: 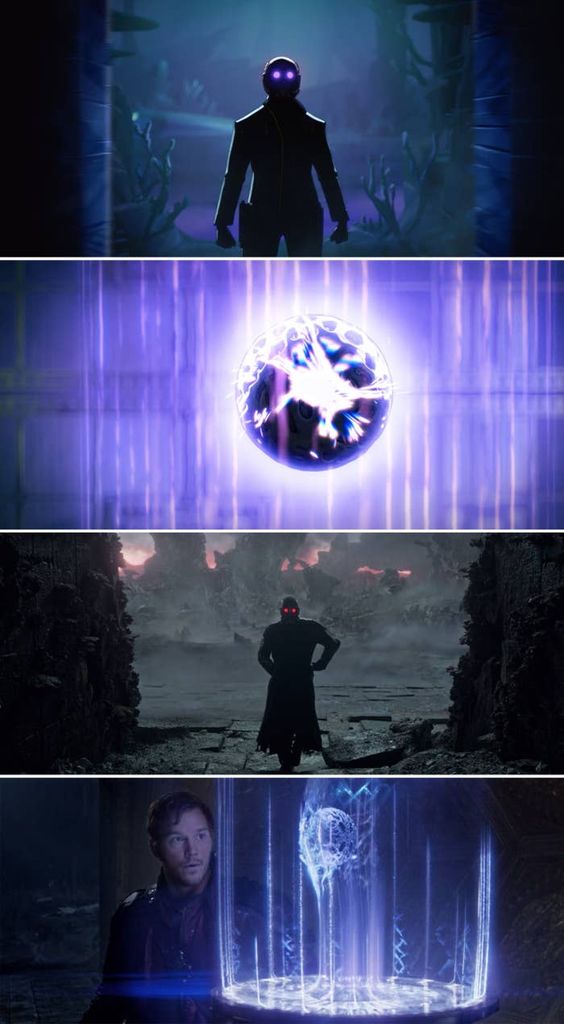 26. In this reality, Korath is a massive fan of Star-Lord, which is different from Guardians of the Galaxy, where he doesn’t even know who Star-Lord is: 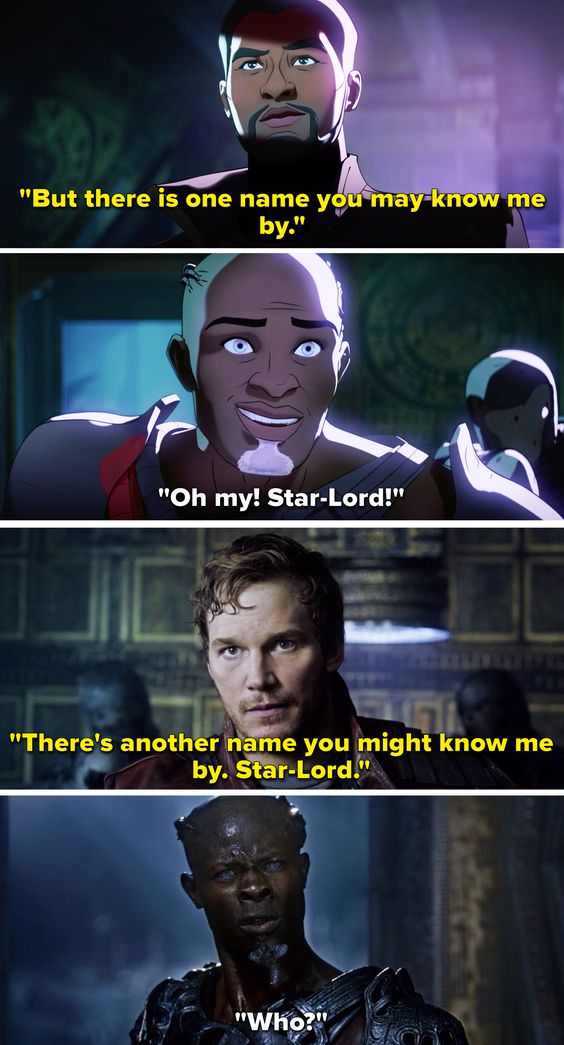 25. Korath asks if he should bow or kneel, and T’Challa says, “Neither is necessary,” which is similar to what he said to Bruce Banner when he arrived in Wakanda during Avengers: Infinity War: 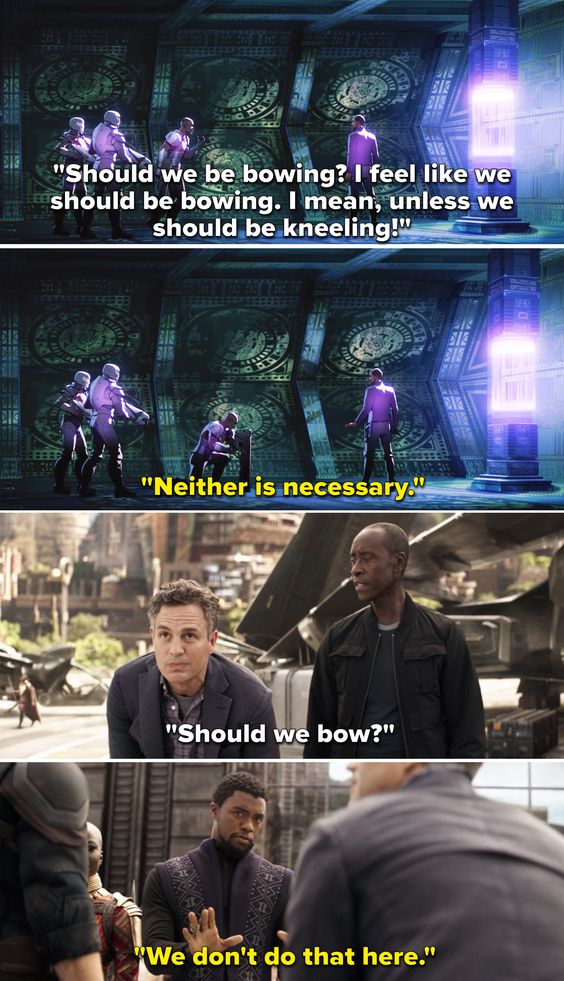 24. Yondu and the Ravagers actually accompany Star-Lord to Morag in this reality, which is different from Guardians of the Galaxy, where Peter Quill goes on his own to steal the Orb: 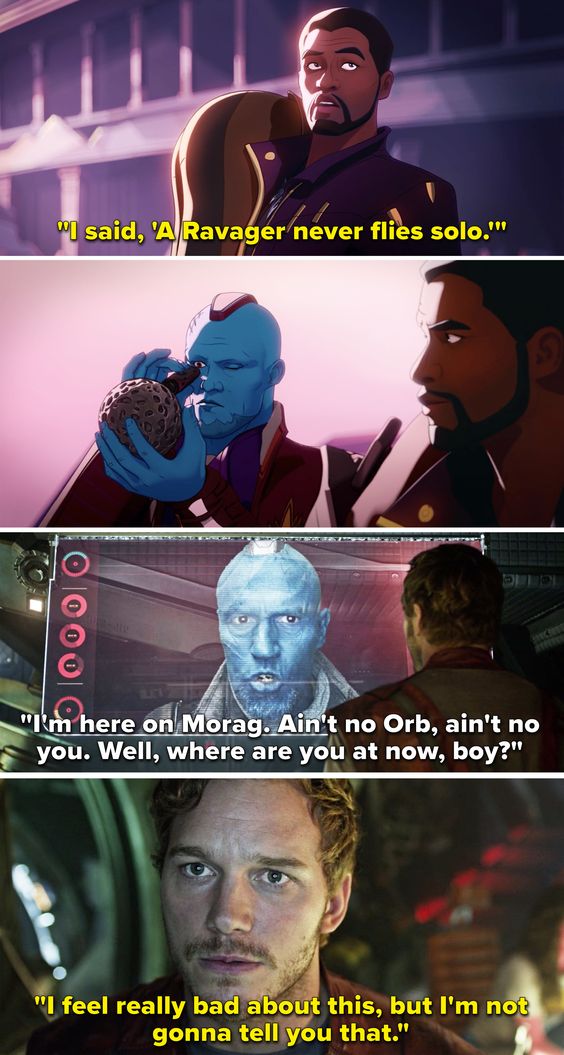 23. T’Challa mentions the Krylorians while talking to Yondu about their treasure. Carina, one of the Collector’s slaves in Guardians of the Galaxy, is a Krylorian: 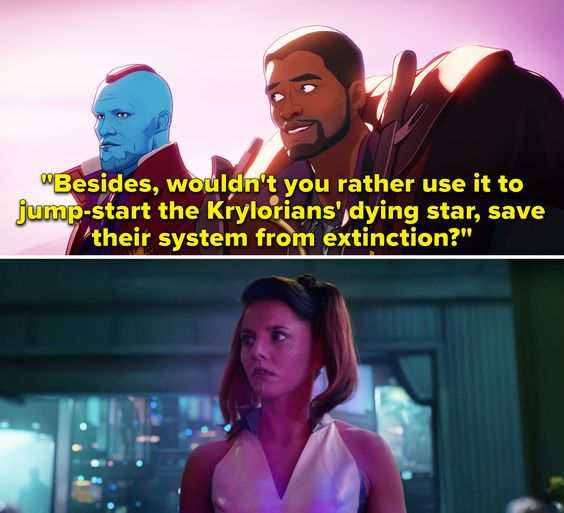 22. Also, T’Challa says that if the Ravagers still operated like they used to, Yondu would “only have half of [his] teeth,” which is exactly the case in Guardians of the Galaxy: 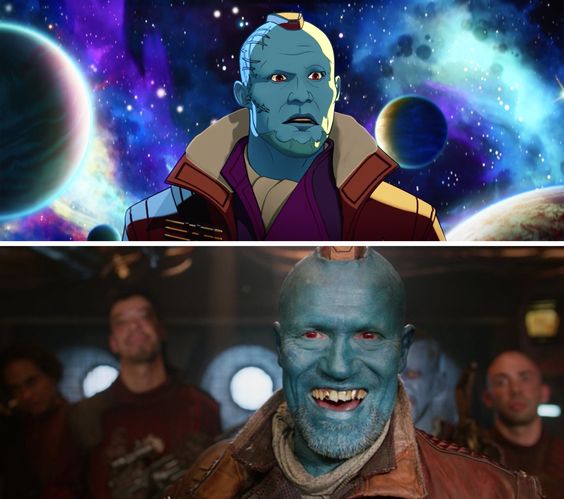 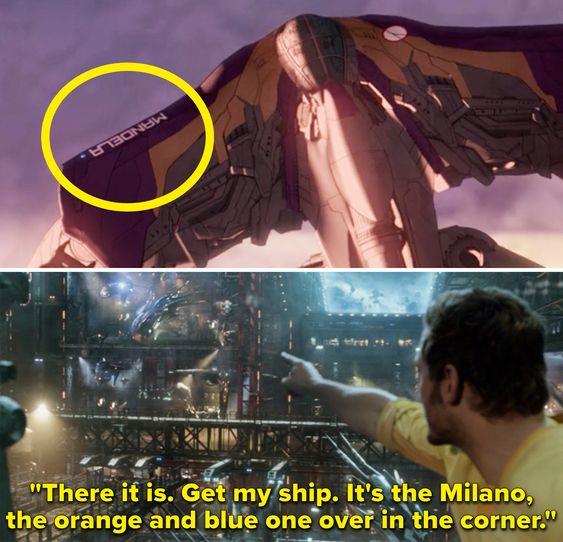 20. The flashback to T’Challa being taken from Wakanda happens in 1988, which is before the flashback with N’Jobu in Black Panther: 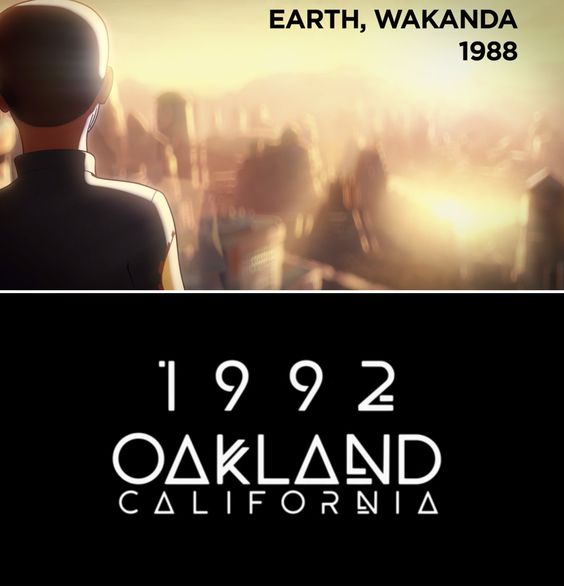 19. Of course, T’Challa’s abduction by the Ravagers is identical to Peter Quill’s abduction in the opening scene of Guardians of the Galaxy: 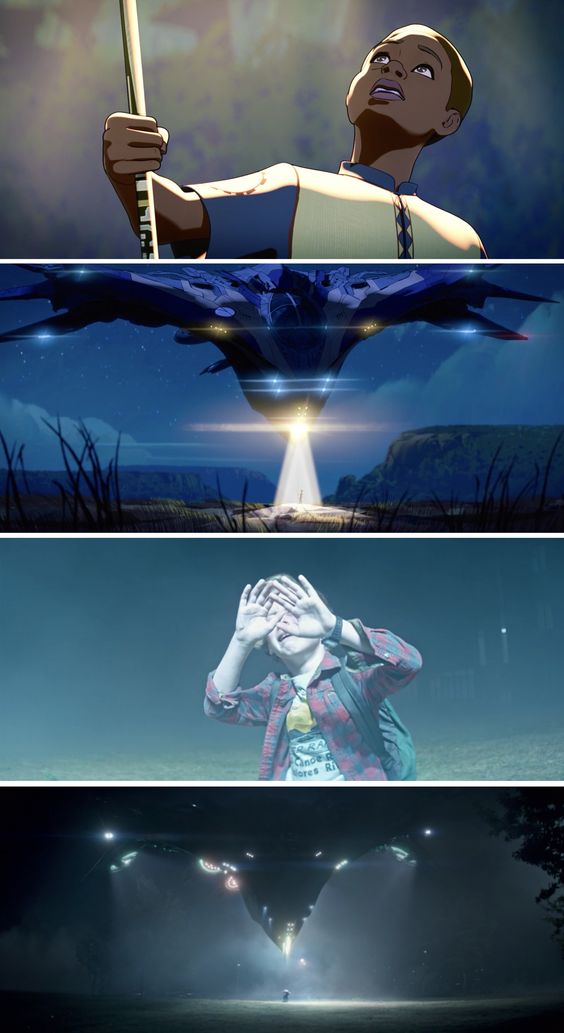 18. While talking about how T’Challa stopped Thanos, it’s mentioned that his plan was “genocide,” which is something Doctor Strange brings up in Avengers: Infinity War: 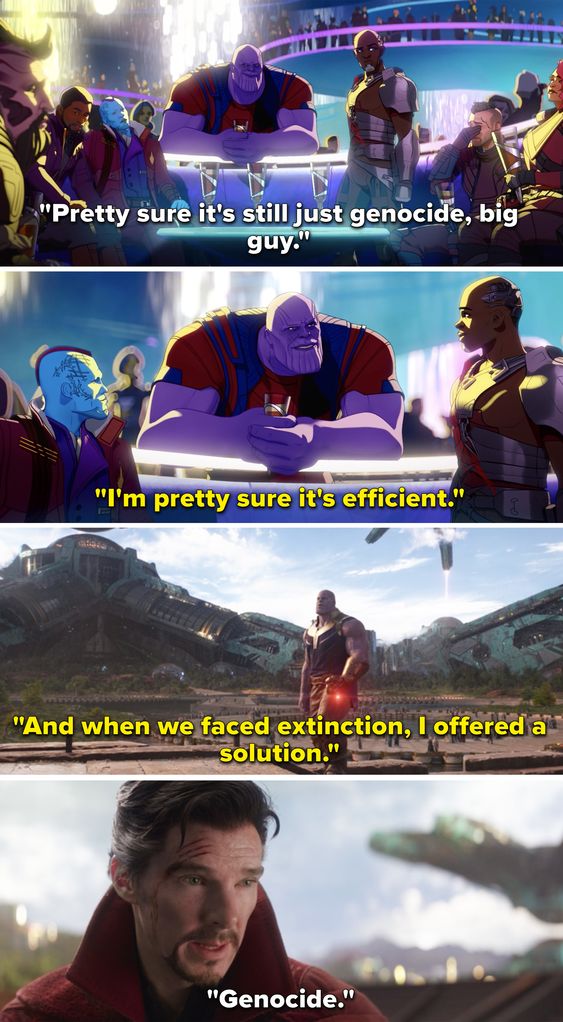 17. Drax’s wife and daughter are still alive in this reality because Thanos and Ronan never murder them alongside half the population of Drax’s planet: 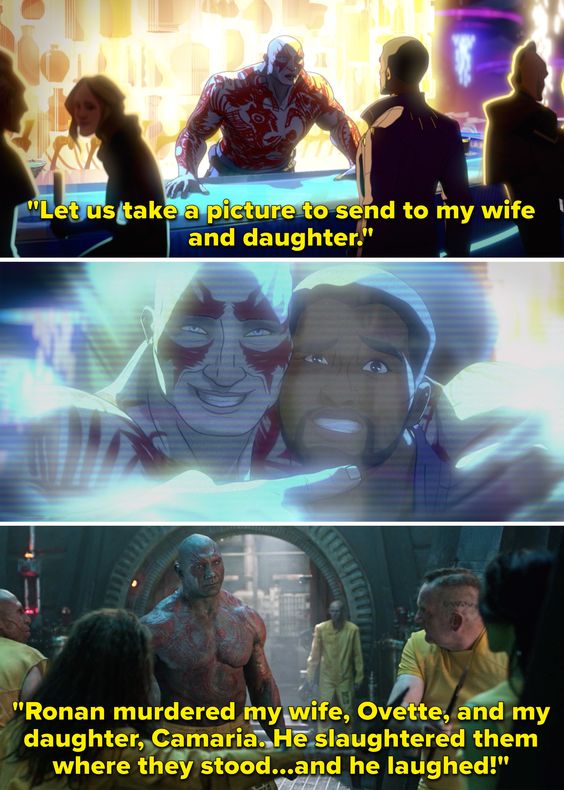 16. While talking to Nebula, T’Challa mentions that Thanos loves gardening, which is something we see him do at the beginning of Avengers: Endgame after he thinks he’s won: 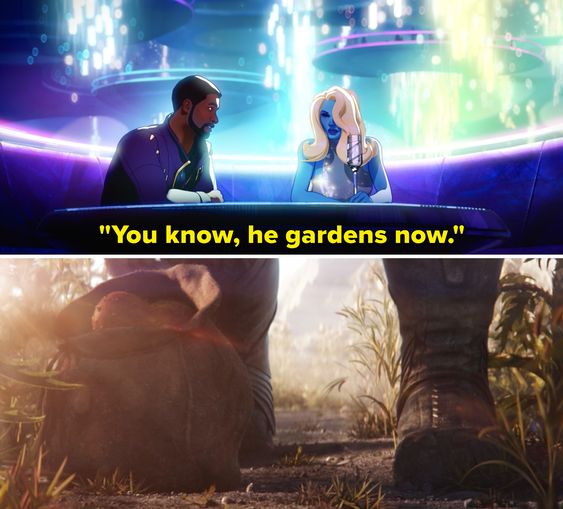 15. Also something to note is that Nebula only has one cyborg eye, which means in this reality, T’Challa reasoned with Thanos before he continued to experiment on Nebula: 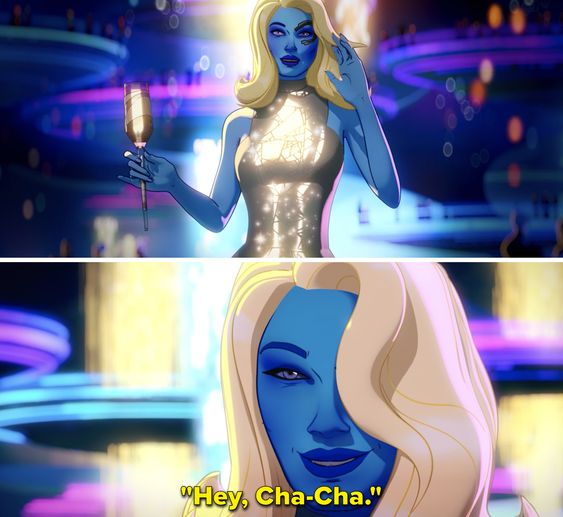 14. Just because I love attention to detail, the coordinates for Knowhere in this reality still match the ones we see in Guardians of the Galaxy: 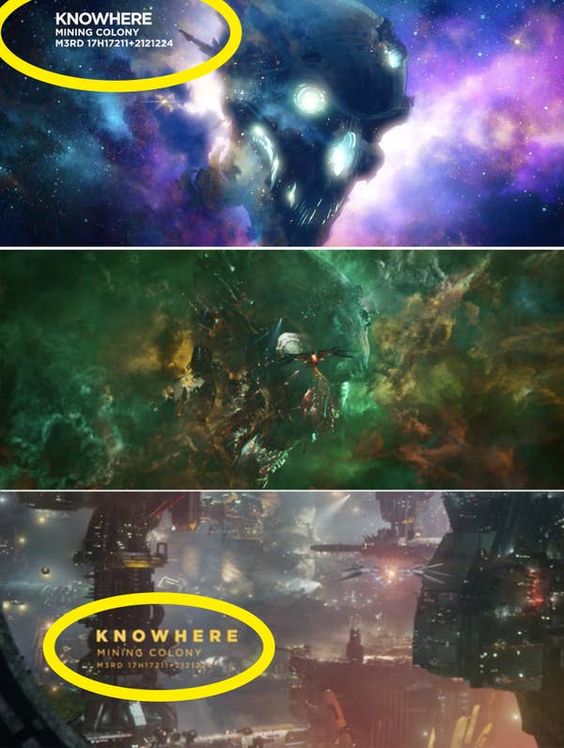 13. We learn that the Black Order are working for the Collector instead of Thanos. In case you need a refresher, Proxima Midnight, Ebony Maw, and the rest of the Black Order worked for Thanos in Avengers: Infinity War: 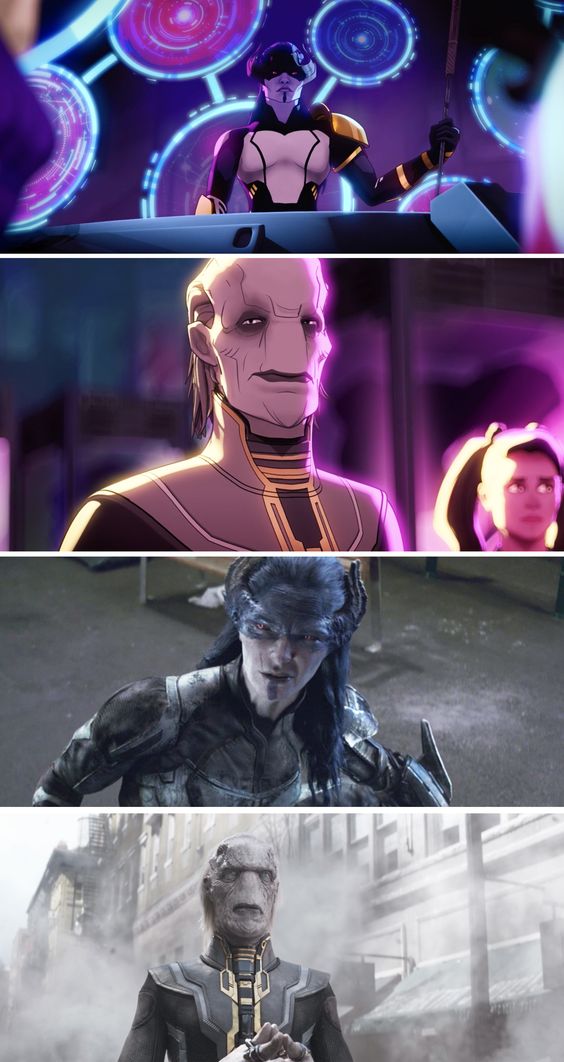 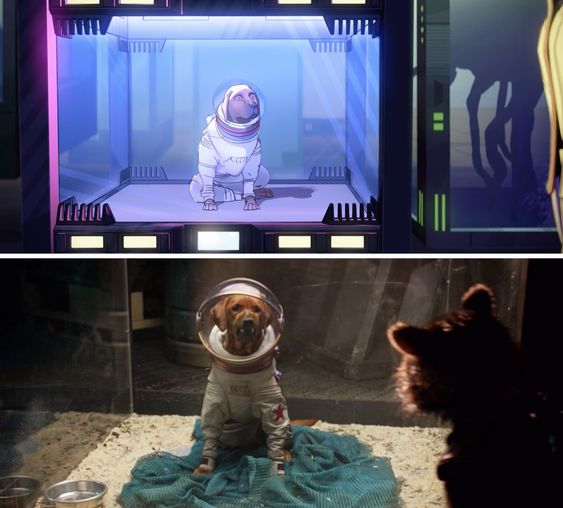 11. T’Challa also passes by a Dark Elf in a cage. Malekith and other Dark Elves notably battled the Asgardians in Thor: The Dark World, and you could spot one in the Collector’s collection in Guardians of the Galaxy: 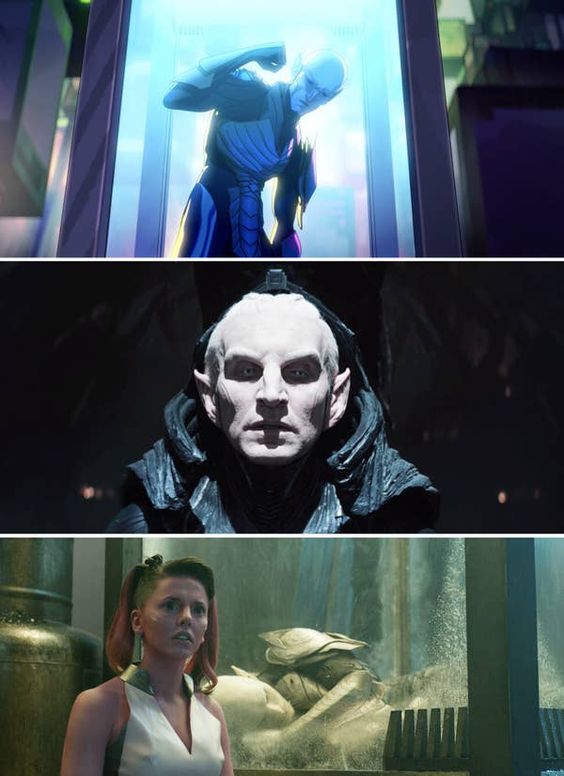 10. Of course, T’Challa also runs into Howard the Duck, who we also saw sipping a green drink in Guardians of the Galaxy. I know this isn’t a hidden detail, but I just love talking about Howard the Duck any chance I get: 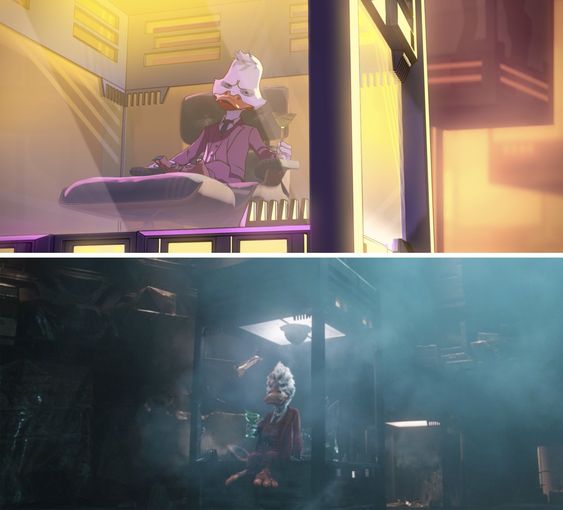 9. While running through the Collector’s treasure rooms, T’Challa passes several notable ships from the Marvel Cinematic Universe. First, we can see one of the Nova Corps ships and the pods that Ronan’s followers used in Guardians of the Galaxy: 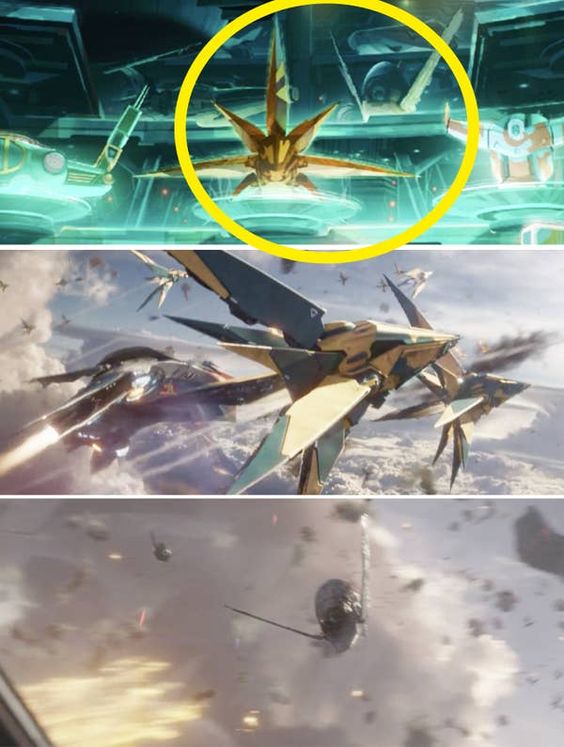 8. And you can spot the Grandmaster’s infamous party ship from Thor: Ragnarok: 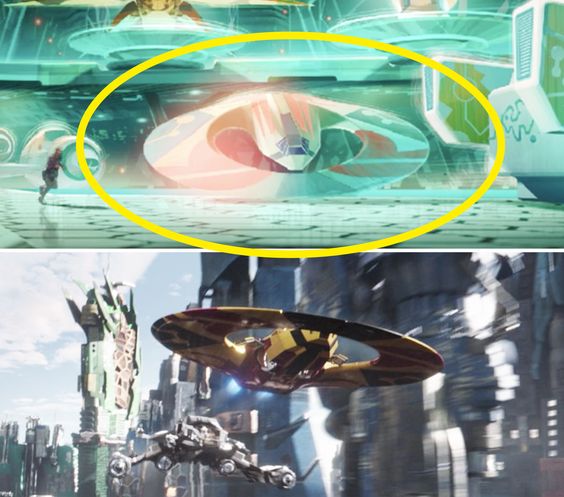 7. Also, this appears to be the ship that Scott and the team use to enter the Quantum Realm in Ant-Man and the Wasp: 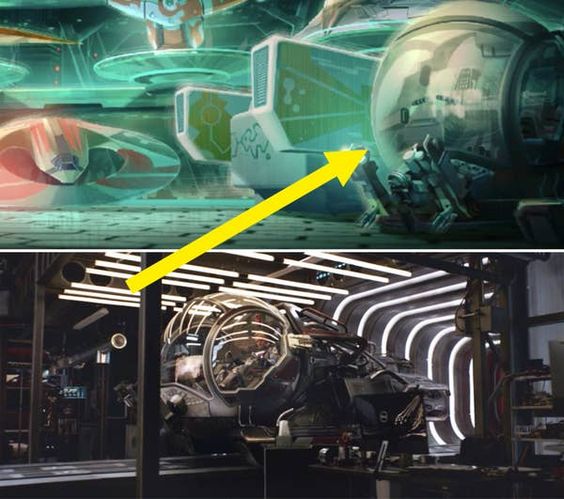 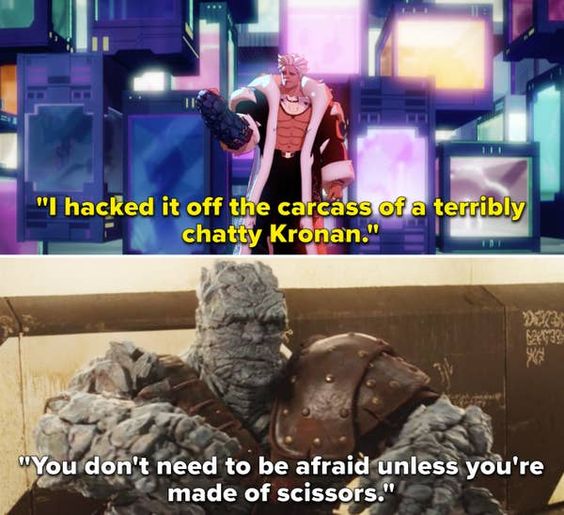 5. Among the Collector’s weapons, you can spot that he has Captain America’s shield, Mjölnir, and what looks like one of Loki’s daggers: 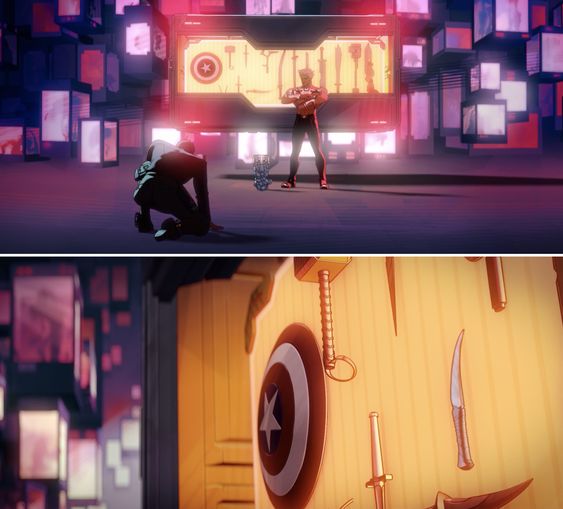 4. The “Asgardian Goddess of Death” who the Collector refers to is obviously Hela, and he even wears her helmet and mimics her moves from Thor: Ragnarok: 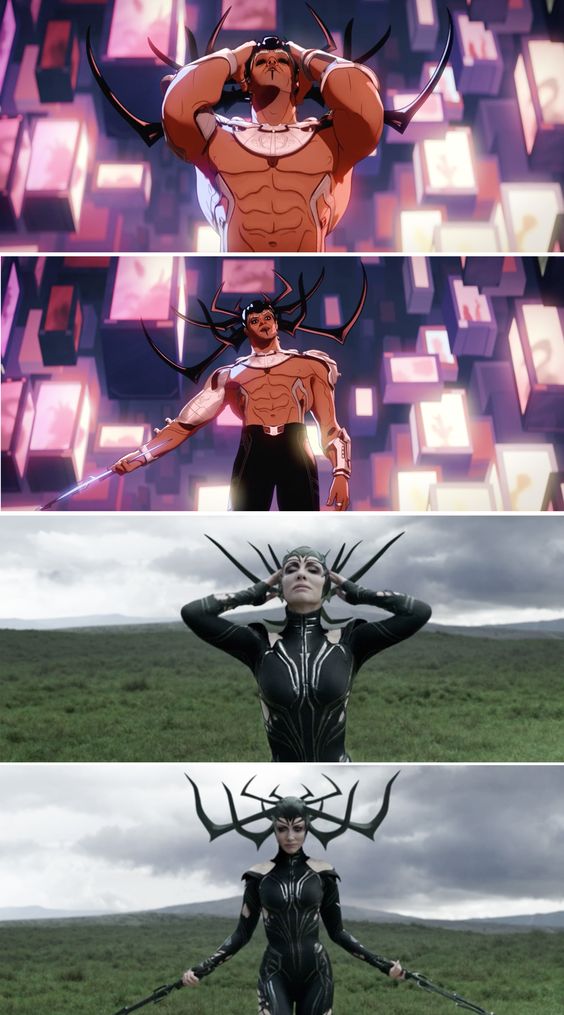 3. When Yondu arrives to help T’Challa, the Guardians of the Galaxy theme song can be heard in the background: 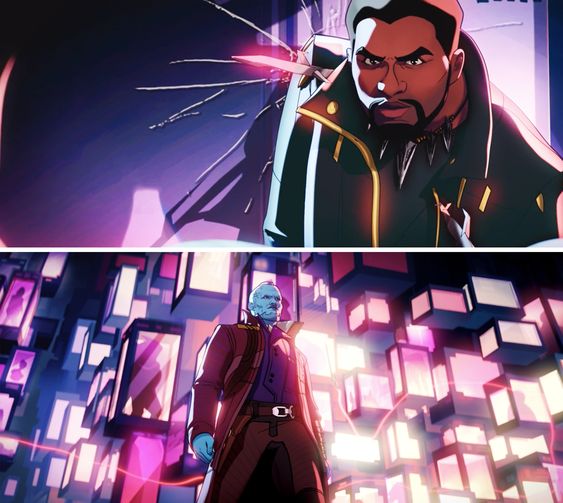 2. While in Wakanda, Kraglin talks about “Jump Points” and how they make your face all weird, which is something we saw happen in Guardians of the Galaxy Vol. 2: 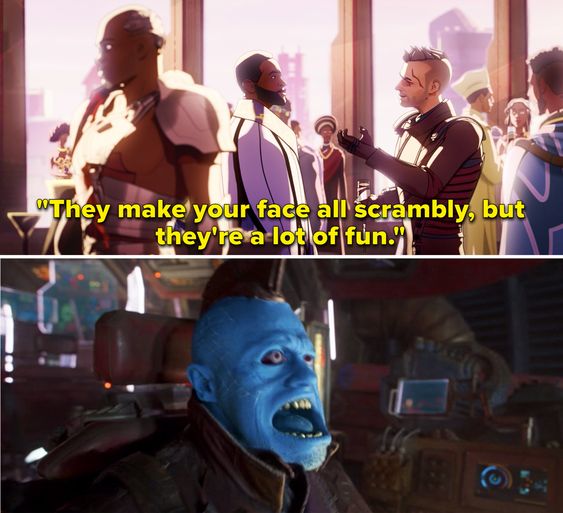 1.Finally, when Ego finds Peter Quill on Earth, he’s working at Dairy Queen, and in Guardians of the Galaxy Vol. 2, while Ego is living with Meredith Quill, they visit a Dairy Queen: 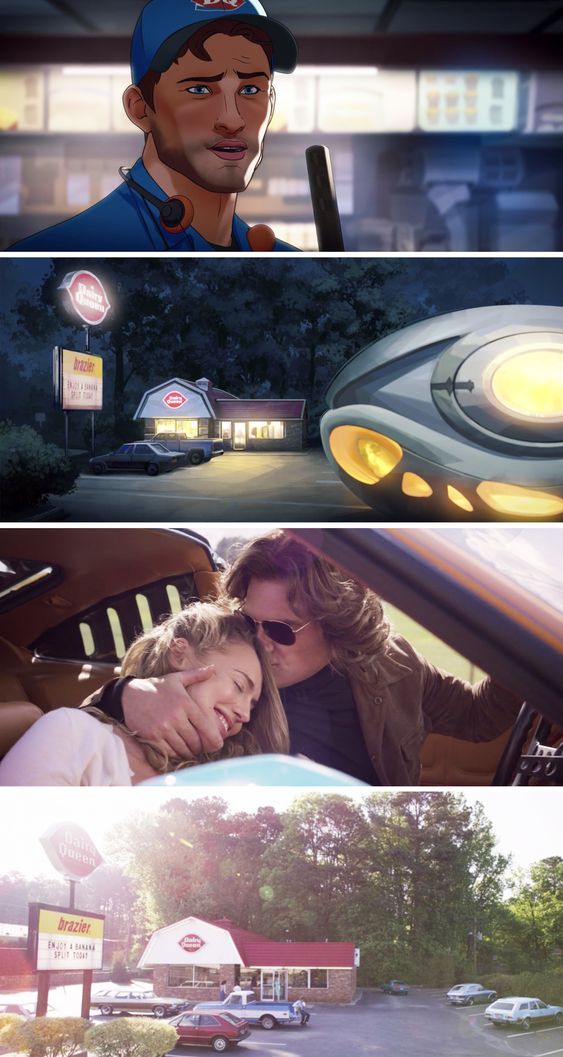 So yes, these are the 27 details that we lads at Animated Times have found in the second episode of What… If?. Well, what can I say? These are some of the most impeccable details that have been in an episode. I mean, Chadwick’s last performance as T’chala was mind-blowing. We are gonna miss you Chad. Did you notice any additional Easter eggs or interesting details? Do you have a better theory than the one stated above? Fill us in on everything in the comments section below. Till then, keep reading Animated Times, the perfect place to get a closer look at the entertainment industry, upcoming movies, TV series, celebrity gossip, and much more. We’ll have you covered. Keep reading animated times, guys, for more.