It is not easy to believe that Forrest Gump was almost close to not getting made. The film went through several uncertainties and multiple re-writes. At one point in time, it was even difficult to cast the right actors for the roles. The makers spend years releasing the project on screen, but in the end, the last edit seemed way too similar to Rain Man. Apparently, this was not the only weird thing about Forrest Gump.

At last, Paramount Pictures bought the rights, and Forrest Gump later won Oscar for Best Adapted Screenplay. This happened because casting Tom Hanks was pretty much perfect. Perhaps that is why he won the Academy Award for Best Actor. There were many fascinating behind-the-scenes stories to share with family and friends that hold the film dear and near our hearts.

Robert Zemeckis and Tom Hanks Paid For The Running Scene

In an interview, the film’s lead actor, Tom Hanks, explained how Forrest Gump was about to get down from the wheels due to significant financial issues. He said, “The studio was one day away from pulling the plug on this one movie I was going to make, and the director came to my house and said, ‘Look, this is going to fall apart because they won’t give us the budget for shooting this one sequence, and we’ve got to have this sequence.” Later, the film director proposed Tom Hanks split the cost and help the film get saved from shutting down. To which Hanks said, “I said, ‘All right.’ And the sequence was Forrest running across the country,” Hanks revealed. “And we were 48 hours away from it being shut down. So I’m glad that worked out.” 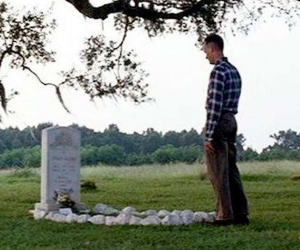 Jenny tells Forrest that she has some sort of virus, and the doctors don’t really know what it is. However, while Forrest Gump never specified any details on the “virus,” the audiences were told that Jenny was a drug addict and Hepatitis C was the thing that showed up in the late 1980s. The confirmation came in the sequel Gump & Co.

Remember the scene where Gump talks about people there in mama’s house while growing up? And then shows up a young man playing the guitar? He was playing “House Dog” while Gump was dancing with his leg braces. While Kurt Russell was not credited by the makers of Forrest Gump, the man with guitar certainly sounds like him.

In the movie, Tom Hanks is asked to share his Vietnam experience in front of people who gathered in Washington DC; he approached the mic, but apparently, someone pulls off the wire. It was an anti-war protest. The man who stands next to Hanks hears him and gets deeply affected. As per Tom Hanks, he said “Sometimes when people go to Vietnam, they go home to their mommas without any legs. Sometimes they don’t go home at all. That’s a bad thing. That’s all I have to say about that.”

When the makers decided to make Forrest Gump, it was not Tom Hanks who was first approached. Instead, the makers’ first choice was John Travolta to play Forrest Gump in Forrest Gump.