It’s no secret that actors need to be in great condition before shooting action movies in order to appear good on camera, and certain stars are always doing naked scenes to show off their physique. However, in recent decades, particularly with the emergence of superhero films, Hollywood has become considerably more exacting about what actors must look like with their shirts off. It’s no longer just a matter of “getting in shape”; actors now have to do vigorous (and sometimes dangerous) workouts for nine months leading up to certain roles, follow ultra-strict nutritional guidelines, and partake in a series of bizarre (and sometimes quasi-legal) tricks right before shirtless scenes, just so they can capture the hyper-jacked, mega-chiseled aesthetic that studios are increasingly looking for. Here are some of today’s biggest action actors discussing the insane routines they must go through every time they need to film a naked scene.

6. Hugh Jackman: ‘The Three Months Before Is Very Specific – And It Finishes With Dehydration’: 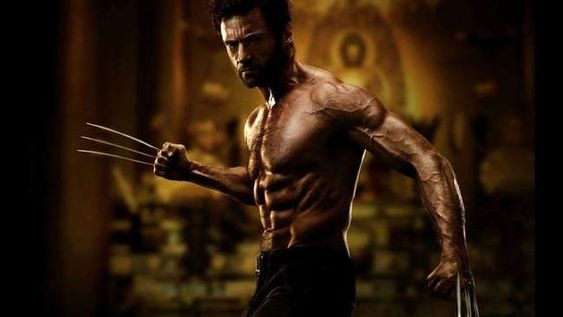 Wolverine’s mutant ability to recover from any cuts or fractures comes in handy as a fictional character. His metabolism is always moving, and as a result, he’s ripped to perfection-which is why it’s difficult to find an actor to play him. Hugh Jackman felt he could whip himself into shape in a matter of weeks after landing the part of the muscular mutant in 2000’s X-Men. Reality soon set in, and the producers were forced to move his naked sequences to the end of the film so he could tone his physique to Wolverine-level perfection. Since that first picture, Jackman has adhered to a rigid program in order to get his physique in shape for reprising his most renowned role. As the actor said on The Late Show with Stephen Colbert, he would request the precise day he needed to show off his abs, then dehydrate himself shortly before the scene: I find out the date, which is the shirt-off scene. And it’s about a three-month run-up. So you have got to be in good shape, but the three months before are very specific. And it finishes with dehydration. [To the audience] Don’t do this at home. He went on to say that he would dehydrate his body for roughly 36 hours, causing his veins to bulge out as his muscles burst. It’s not a permanent solution, but it worked for a few hours of filming.

5. Brad Pitt: ‘If You Strip Away Fat And Get Guys To 3-4% Body Fat, They Look Huge Without Necessarily Being Huge’: 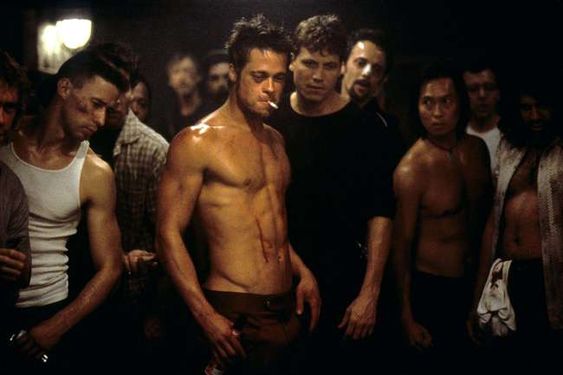 Brad Pitt has never been afraid to toss his shirt on the floor in front of a camera, but his confidence in his body is backed up by years of training and exercise. Having said that, he still had a lot of work to do before he could play a naked Tyler Durden in 1999’s Fight Club. He was not just ripped in his naked moments, but his figure has since become a sought-after target for personal trainers. Pitt achieved the appearance that his physique was composed entirely of muscle and bone by shedding a significant amount of weight and most of his body fat. He weighed only 155 pounds at the time, which isn’t much for a nearly six-foot-tall man. Even so, it’s hard to tell that he weighed less than a typical high school senior when he’s not wearing a shirt. “If you take away fat and get guys to 3-4 percent body fat, they appear enormous without really being enormous,” trainer Mark Twight explains. Pitt focused on a different muscle area each day to prepare his body: the chest on Mondays, the back on Tuesdays, the shoulders on Wednesdays, and the biceps and triceps on Thursdays, with the rest of the week dedicated to cardio and recuperation. If you want to build your body into a Tyler Durden-esque figure, you may use the same training schedule Pitt used.

4. Gerard Butler: ‘Nobody Wanted To Be Remembered As The Spartan With The Muffin Top’:

In terms of fitness, the film 300 is legendary. The actors who played the Spartans in the film were accused of using CGI abs since it was very impossible for anybody to achieve their body’s perfection. As it turned out, the film was filled with CGI, yet none of it was required to improve the performances. The physiques featured in the film are real, and they were only achieved through a gruelling training regimen. The training that the actors underwent has been called the “Spartan Workout,” or simply the “300 Workout.” Mark Twight, a self-taught workout expert and mountain climber, came up with the idea. Twight was irritated when it was suggested that his “creations” utilised CGI, but he promised his followers that a hard 10-week exercise (12 weeks for Gerard Butler) would get you Spartan-ready if you ever need to fight a Persian assault. Twight made the actors workout with each other as part of the fitness routine to stimulate their “masculine vanity.” There is, as the trainer put it, “There’s nothing more powerful than thirty males in a room, all wanting to be the alpha. Everyone was dressed in leather underwear and a cape. Nobody wanted to be known as “the Spartan with the Muffin Top.” “Here’s all you need to do to stand beside the 300:

The exercises must be performed in quick succession, with no pause between movements. The objective is to accomplish it in as little time as possible. 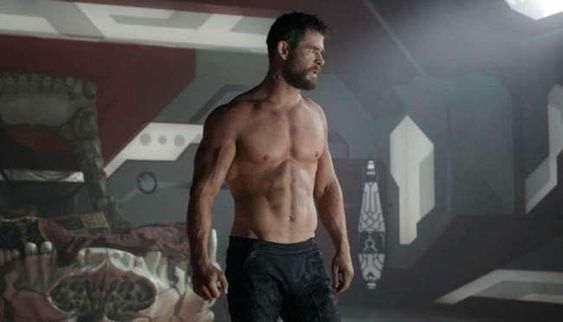 When Chris Hemsworth was cast as Thor in the Marvel Cinematic Universe, he practically agreed to be absolutely ripped for the next decade. While he was toned beyond belief in the previous Thor film, he significantly bulked out for the depicted scene in Thor: Ragnarok. In an interview with TRAIN Magazine, Hemsworth detailed his exercise routine: For Thor, my workouts alternate between heavy weightlifting, bodybuilding work, and lighter timed fitness, and more resistance and functional type stuff. With bodybuilding, we usually do four sets, and the range is anywhere from eight to 12 reps. We train six days a week for about an hour, but never much more than an hour, but we go hard during that time frame. I do train when I’m not playing Thor, but I’m less bulky because I eat less, and my workouts are more rounded and less centered around being muscular. I usually put on about 20 lbs. of muscle to play Thor. Hemsworth has stated that he felt alright showing off himself in the first Thor picture since he had put in the effort. However, when it came time for the thunder god’s third outing, the actor refused to go naked. Originally, there was no naked moment in Ragnarok, and Hemsworth was content to be less objectified, but director Taika Waititi suggested they include one. 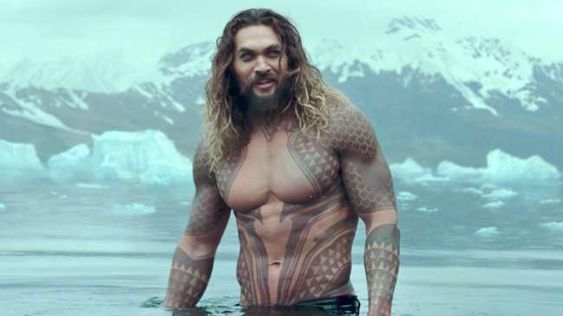 Jason Momoa has spent most of his career playing muscle-bound warriors and other similar characters. While he looked excellent in Game of Thrones, he stepped up his game to play Arthur Curry, AKA Aquaman, in the film of the same name. Momoa was already a large person, but in order to play Aquaman, he had to get into superhuman form. The Aquaman workout is strenuous, but it’s all part of the job for Momoa. Momoa is aware that his ability to get into shape for a job frequently makes him a target for a certain role. “That’s all they want-me with my shirt off!” he once quipped. For a guy who notoriously enjoys Guinness (Momoa has his own specialty drink called the Mano Brew), avoiding carbohydrates for a while is hard. For a far smaller diet, the actor must cut the items he enjoys. He may take a break now and again to eat something delicious, but his strategy is based on losing fat, toning muscles, and then working out like a crazy person until the director says, “Action!”

1. Henry Cavill: ‘It Feels Like You’ve Been Sucking On The Tailpipe Of A Car’:

Not for nothing is Superman dubbed “Man of Steel.” (Of course, that’s because he’s stronger than steel and can bend it like butter, but it also relates to his physical appearance.) Superman can not be played by just any actor, and even Christopher Reeve had to bulk up in the 1970s and 1980s to fit out the spandex. Henry Cavill’s goal wasn’t so much to gain muscle mass (he’s been building for years) as it was to improve muscle form and tone. Cavill trained for the role by studying Mark Twight’s “The Tailpipe” routine. The Tailpipe earned its name because “after you’re through, it feels like you’ve been sucking on a vehicle’s tailpipe.” The workout consists of 25 repetitions of the following exercises:

There is no rest period between exercises, but you must take eight regulated breaths in and out through your nose before going on to the next.

So yeah, these are the 6 actors who explain what it’s like to get fit for shirtless scenes. Well, literally, it’s a very tough job to go through a shirtless scene in the movies. I mean, the actors really put in the hard work to get in shape and show those 6-pack-abs. What do you guys have to say about these actors? Did you like these actors and their acting? Which among them is your favorite? Please share your thoughts in the comments area below. Till then, keep reading Animated Times, the ideal site to learn about the entertainment business, new movies, TV shows, celebrity gossip, and much more. We’ll keep you updated, and you can find us on Instagram and Facebook.