when you’re a superhero working in one of the most dangerous cities in America, you have… different needs. Enter: The Batmobile. Batman’s signature vehicle made its first appearance alongside Batman, in Detective Comics #27. It was considerably more plain then, a scarlet colored vehicle that was just exceptionally fast over anything else. Later, creators would gradually modify it into something that could fit Batman’s needs in the crime-filled city of Gotham. Since then, through movies, television shows, and seven decades of comics, there have been more versions of the Batmobile than Tony Stark has suits of armor, with designs ranging from realistic sport cars to enormous tanks. So for this list, we’re counting down 15 of the best Batmobiles Bruce has ever had, all the way up to his coolest design ever. With so many available, we used a few qualifications to narrow the field: their usefulness in the field, how popular they have stayed over the years, and according to their overall design and just much of a “Bat” mobile they really are. 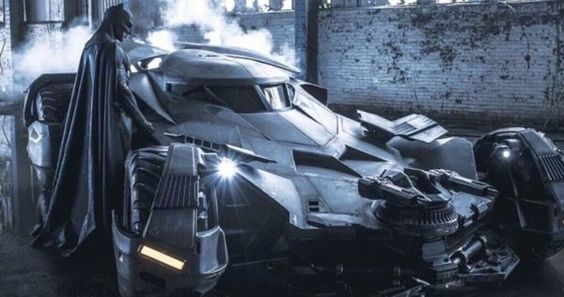 Styled after Frank Miller’s Bat Tank is this little thing. It took roughly a year to build between a team of multiple designers including director Zack Snyder, and production designer Patrick Tatopoulos. Much like the man in the driver’s seat, this Batmobile is armed to the teeth with weapons: a ballistic missile defense system, smoke grenades, a gatling gun strapped onto its front, and even an electric shock defense in case someone tries to…. y’know, steal a tire. Again. Given it took the film crew so long just to build the darn thing, they actually created three different versions of the car: the actual Batmobile that was used for more straightforward scenes, and proxy cars that were Dodge Ram Dually trucks digitally altered to resemble the actual Batmobile for real scenes. It’s probably a good thing too, given all the trouble Bruce gets into in this film — going up against not one, but technically two Kryptonians. Cool as it looks, this does remind you of how much of a hypocrite Bruce is. He’s been characterized for so many years as being anti-gun… until he hops into his personal superhero sports car and suddenly it’s strapped down with enough to survive a Mad Max scenario. 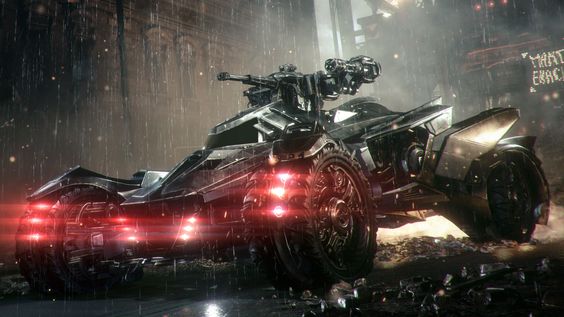 Two games into the now legendary Arkham video game series from developer Rocksteady, it wouldn’t be until the final game that gamers would finally have access to the biggest toy in the Dark Knight’s arsenal. Released in June of 2015, this car was the result of Bruce’s improvements after the original was destroyed in 2009’s Arkham Asylum. Much like the Tumbler from the Nolan films, this version of the Batmobile is equipped with two separate modes: a normal pursuit mode to take advantage of the vehicle’s powerful 1200HP engine, and a “battle mode” to deal with the dangers of Gotham, after Scarecrow’s threat of a new fear toxin leaves the streets empty aside from it’s most dangerous elements. The Battle Mode featured an EMP generator, a 25mm Vulcan machine gun, and 60mm cannon capable of firing everything from explosive shells to non-lethal rubber pellets. That said, as all-purpose a vehicle as it was, it was also a pain to use in game. Piloting the car in battle mode wasn’t very fun, and eventually learning nearly every boss battle was just an excuse to get you in the Batmobile to use the tank mode again sucked out what fun was there. 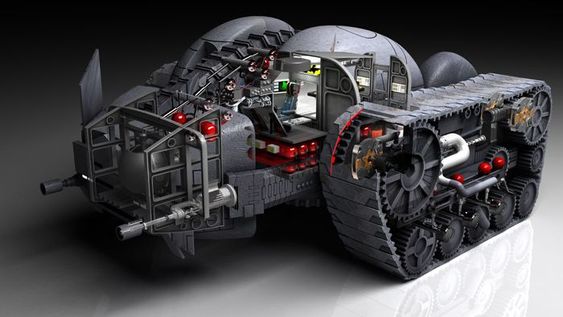 It’s impossible to have a list about the best Batmobiles without having this somewhere on it. Featured primarily in Frank Miller’s now legendary alternate universe mini-series, Batman: The Dark Knight Returns, this Batmobile was used by an older, grizzled Bruce Wayne. Forced out of retirement to put the mutant gang down once and for all, a new, harder Gotham called for a new, harder Batmobile. Supposedly, the change happened after Bruce modified it to deal with some “nasty riots” 15 years prior to his retirement. Outfitted for nothing less than Bruce’s last war on crime, this Batmobile was capable of ignoring rocket launched missiles and grenades alike. Moreover, it featured its own medical bay, meaning it could serve as a mini-Batcave for Bruce if necessary, patching him up without needing him to leave the field. This version of the Batmobile also has a brief appearance in an episode of The New Batman Adventures, “Legends of the Dark Knight”. What keeps the Bat Tank from climbing any higher is it kind of takes Batman’s mythology too seriously. Bruce mocks the idea of it even being called the Batmobile, claiming it’s an idea Dick came up with. If Bruce is riding around Gotham dressed as a giant freaking bat, then it’s not really all that much of a stretch to own up to this being the Batmobile.

3.BATMAN: BRAVE AND THE BOLD 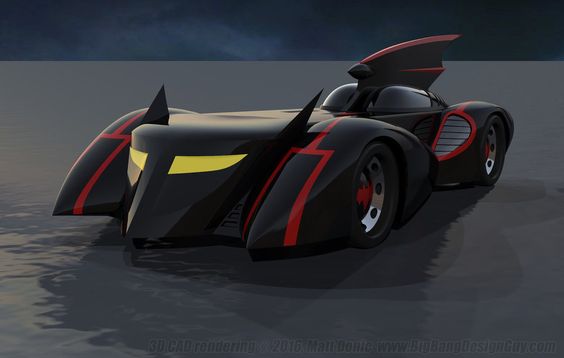 In 2008, Cartoon Network aired the first episode of their latest incarnation of Batman. In Batman: Brave and the Bold, the character would hearken back to his lighter, Silver Age days but play them completely straight, as he teamed up with a wide array of heroes from across the DC Universe and had some of his most impossible, over the top adventures in years. For a show like that, you need a Batmobile that can keep up with all the absurd adventures Bats is bound to go on, which leaves us with this little baby. Though this Batmobile isn’t nearly as iconic as many of the other entries on this list, it makes up for that in raw coolness. It combines the red-and-black color scheme and canopy of the ’66 Batmobile, the battering ram of the ’40s Batmobile, and the overall body design of the Batman: TAS car for a look that’s still quite elegant. Even better? This Batmobile is the only one that Batman ever needs — it can transform into a plane, a sub, a motorcycle, and in at least one case was even a robot. With a gorgeous look and unparalleled versatility, there’s no question this is one of Batman’s best cars ever. 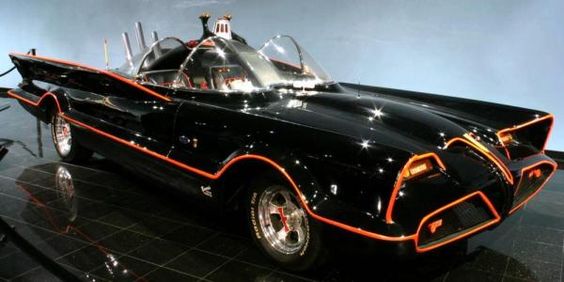 No matter how cheesy we might think the Adam West-led Batman television series was these days, it’s impossible not to admit one thing: he had a pretty sweet ride. Designed by custom car builder George Barris, the Batmobile from the famous live-action series was based on an existing car idea from the Ford Motor Company. Known as the Futura, the original model already had the long fins and bubble canopies the car is known for today, and so Barris only needed to give the fins a bat-like appearance and alter the car’s nose into the signature bat mask. Afterwards he painted the car glossy black with red trim and suddenly he had the car we know of today. The ’66 Batmobile wasn’t short on weapons either: it featured a chain slicer, lasers, rockets, a telephone and radar, and a police beacon.
Despite being a bit gaudy, this car is easily one of the most recognizable Batmobiles in any form of media. The glossy finish and bubble canopies make it look futuristic, perfect for use by a Dark Knight that’s always supposed to be on the cutting edge and staying just ahead of an ever evolving criminal element. 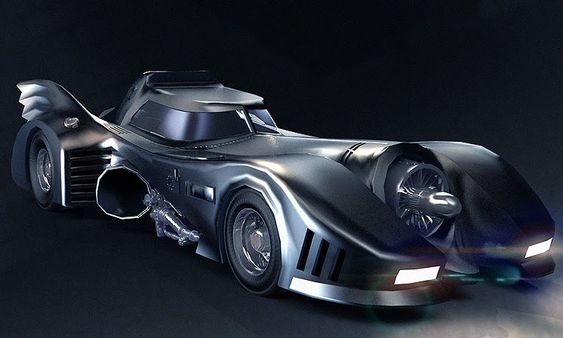 Despite being from a movie that’s nearly 30 years old, for many people, this is still the only vehicle they think of when they think “Batmobile”. Designed by Anton Furst, this car was intentionally made to be unique amongst Batmobiles by somehow managing to evoke the feel of a muscle car while still keeping a sleekness to it. A kitbash of two Chevy Impala chassis, the car runs on a V8 engine in real life, while powered by a jet engine turbine in-universe. Tricked out with plenty of weapons, this version of the Batmobile came with bombs, Browning machine guns, and disc launchers, along with an armored cocoon for additional protection. Most unique about this car is its secondary “Batmissile” mode, where it jettisons its outer shell and operates only off the center section. This allowed Bruce to traverse through tight passageways that the otherwise massive car could never fit through. This Batmobile is essentially the total package: it’s so unmistakably Batman, it’s outfitted with plenty of weapons and gadgets to deal with whatever’s being thrown at him, and it’s recognizable by virtually everyone. Just looking at it tends to stir up feelings of nostalgia for Burton’s original film and that classic Keaton portrayal of the Dark Knight.