Marvel is constantly trying to innovate and come up with new ideas for the future of the MCU characters.Marvel Studios President Kevin Feige recently noted that he is already thinking about movies that won’t be released for seven years. One of the possible new Marvel movie franchises that is being rumored is an official introduction of the Eternals into the MCU. One of the more relatively recent additions to the Marvel comic universe, the Eternals have a strange place in the Marvel Cinematic Universe. However distant they may seem, the Inhumans are still a lot more tied into the Marvel Universe than the Eternals in 1976 after he triumphantly returned to Marvel Comics following a five-year stint at DC Comics.

8.GODS OF THE MARVEL UNIVERSE

The Eternals’ place in the Marvel Universe is a bit confusing, considering that it is not just the fact that humanity has worshiped them as gods, but it seems as though the Marvel Universe specifically treats them as if they literally are gods. This came up in a plotline in the recent series, All-New Invaders, which teamed up the modern day versions of the World War II fighting team, the Invaders. Somehow, almost all of them are alive in present day, from Namor to Captain America to the Winter Soldier to the android Human Torch. One of their fist missions involved fighting against some Kree who had taken hold of an old weapon called the God’s Whisper, which allowed them to control literal gods. In the past, it was used to control Thor, but in modern times, it was used to control Ikaris of the Eternals. Therefore, this suggests that in the Marvel Universe, despite their origins clearly being that the Celestials genetically altered humans, the Eternals are still considered gods. The Eternals, by the way, planned on using the God’s Whisper themselves to get revenge on the Kree by using the device to make Galactus follow their commands.

In Eternals *13, Jack Kirby introduced the Eternal known as The Forgotten One, who is basically supposed to be the sort of prototypical mythical hero, perhaps best remembered as Gilgamesh, but he took on other names as well. Remember, in Kirby’s version of the Eternals, there was no Hercules or Thor, so The Forgotten One could have been the Hercules of the Eternals world.Walter Simonson had written the last few issues of an Eternals miniseries in the mid-1980s, so when Simonson got the chance to make a new Avengers team in Avengers #300, he made the Forgotten One a member.
Soon after, the Forgotten One was injured and one of his fellow Eternals, Sersi, helped the Avengers out. She ended up replacing her fellow Eternal on the team. Sersi served the Avengers with distinction throughout the first half of the 1990s before leaving the team with the Black Knight. As an Eternal, she always had a bit of a skewed view of the world, since she had been alive for so many years. Her sense of morality was sometimes a bit off from the rest of the Avengers.

6. THE ETERNALS BECOME THE URANIANS

In the 1950s, Marvel was best known for its adherence to whatever the popular trends were of the day. The company had its humor titles, like Patsy Walker, plus it had westerns and science fiction comic books. However, every once in a while, Stan Lee would give superheroes another shot. They had worked in 1940s, so the idea was that perhaps they would work again. In 1950, Lee and artist Russ Heath introduced Marvel Boy, a short-lived superhero comic books series. The concept of the book was that a Jewish scientist decided to leave Earth during the rise of Nazi Germany and he traveled to Uranus, where he met the Uranians. who welcomed him and his son with open arms. His son, Robert, was given special wristbands that gave him superpowers. He returned to Earth and was a superhero there. Years later, this “Marvel Boy” was worked into Marvel’s continuity — as we saw, Marvel always wants to work characters into the overall continuity. Eventually, it was discovered that the Uranians were also originally Eternals before they left Earth and settled on Uranus! It was almost as if there was not a single interesting part of the Marvel Universe that was not somehow connected retroactively to the Eternals. 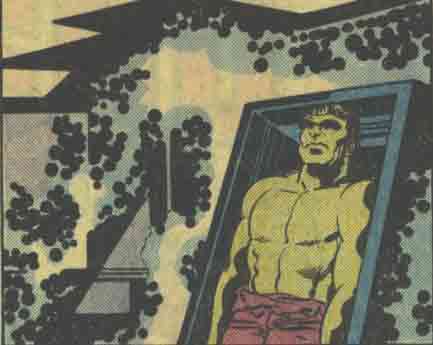 There were obviously exceptions, like licensed comic books like Conan the Barbarian; but in general, if a comic book was not selling well, the easiest way to boost sales was to have Spider-Man or the Hulk guest star in the book. The editors of the books began to pressure Kirby and he eventually came up with the craziest compromise you could think of, and one of the most memorable — for better or worse. They introduced a robot built by two students to be the mascot for their school’s all star game and it just so happened to look exactly like the Hulk! The robot then got imbued with cosmic energy and ran amok, leading to the Eternals having to get involved. In other words, there is technically no Hulk in this Eternals universe, but robots that look just like the Hulk are a whole other story. This was Kirby’s way of playing ball without changing his status quo for the book. It was a hilarious attempt to keep the Eternals separated from the rest of the Marvel Universe.a comic was to have it take part in the shared Marvel Universe.

The late 1960s, it was not like Jack Kirby had become a stranger to how the comic book industry worked. In the early 1940s, Kirby produced one of the biggest comic book hits of the era, Captain America Comics, with his creative partner, Joe Simon, for Timely Comics. Timely Comics owner Martin Goodman promised them certain royalties on the sales of Captain America Comics and he quickly reneged. Simon and Kirby then left Timely for DC Comics where they had a number of hit series, as well. They moved all over the industry over the next decade or so, before breaking up in the 1950s when the industry was doing particularly poorly.
Kirby then essentially created the Marvel Universe with Stan Lee in the 1960s, but by the end of the decade, he was getting the same false promises from Martin Goodman. So, Kirby took his ideas for a new race of gods — which would have been connected to the Asgardians to DC instead, where they became the New Gods, part of Kirby’s Fourth World Saga. When Kirby returned to Marvel in the mid-70s, he liked the idea of a race of gods enough that he came up with a similar concept the Eternals for Marvel. 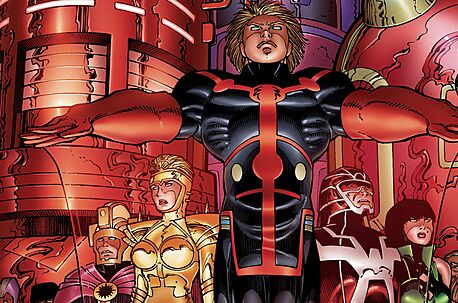 Jack Kirby’s original plans for his Fourth World Saga was that he would launch each title and then he would bring in different creative teams on each of the titles. Kirby would direct each team on the books while he did other series on his own. However, DC told him that the books would not sell if he did not write and draw them himself, so Kirby ended up doing all of the Fourth World Saga. Then DC canceled it before he could finish it. A similar situation happened to Kirby on the Eternals. He clearly had an expansive goal in mind for the series, but he never quite got to it before the book was canceled. He brought the series along slowly, building on the notion of how the world would react if, in effect, god showed up and said that he was soon going to judge the planet. That was what it was like when the Celestials came to Earth. They planted themselves and just started watching. The Eternals and the Deviants then reacted and made their age-old war public, but that was not the main direction of the book. Kirby had deeper ideas in mind. Sadly, the book was canceled after 20 issues, so once again, a Kirby saga of the gods was cut down. 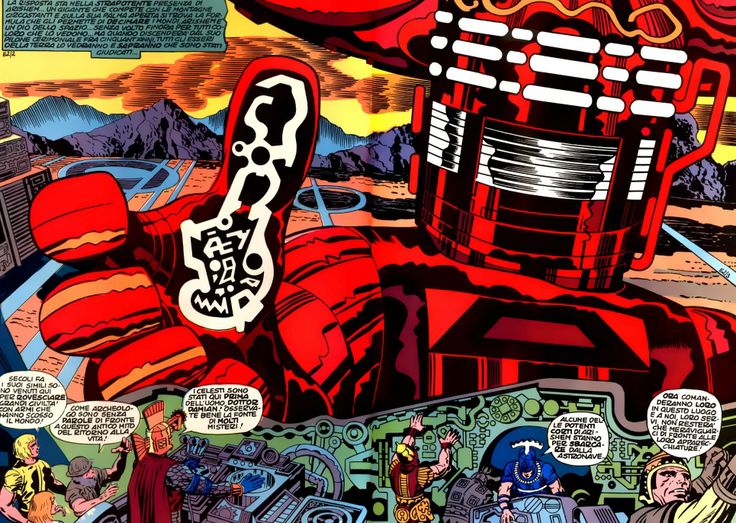 the Celestials and the Eternals were part of the Marvel Universe, writers quickly tried to see if the ideas that Kirby introduced in the Eternals could be applied to the greater Marvel Universe. Kirby was following a number of popular books of the era, like Chariot of the Gods, which suggested that Earth had been visited by aliens millennia ago and in fact it was due to these aliens that the evolution of the human race took place. This followed along the lines of the theories about how any science that was advanced enough could be seen as magic to under-developed people. Thus, the Celestials and the Eternals were responsible for our ideas of what magic is. Similarly, the idea would be that while the Celestials experimented on humans as well as Eternals, some of the humans maintained a piece of that Celestial tampering, and that is the explanation for how mutants came to exist, that they were the result of Celestials altering the genetic code of humanity. So rather than the Eternals not being part of the Marvel Universe, they were now the foundation of the Marvel superhero era! Interestingly enough, one of Earth’s earliest mutants, Apocalypse, was also connected to the Celestials they gave him his technology.

Jack Kirby did not want to have be part of the Marvel Universe period, the Eternals ended up not only explaining the history of mutants on Earth, but also of the various other alien races in the Marvel Universe! Have you ever noticed that each alien race in the Marvel Universe seems to have some sort of gimmick, while also being essentially humanoids. Well, as it turns out, that was also due to the Celestials. While they are best remembered for their experiments on Earth, it turns out that they experimented all over the universe. They experimented on proto-versions of the alien races that would become the Kree and the Skrulls. In fact, it was the experimentation of the Kree that ultimately led to the race doing experiments of their own, which is how they ended up creating the Inhumans. More or less, if you are part of any sort of unified group that shares distinctive attributes and powers, it is likely that the Celestials had something to do with your creation. This also leads to the connection between Earth and those other planets, as they all have the shared experience of being experimented on by the Celestials.