Steve, Tony, Natasha, Clint, Bruce, and Thor! These are not just names of superheroes but they are equivalent to emotions. These superheroes are original Avengers and close to our hearts.

Marvel fans lost a huge deal in Avengers: Endgame and haven’t recovered yet. It has been more than a year and fans are still noticing some emotional moments of these superheroes. Take a look below at those moments that are heartbreaking and might bring tears to your eyes. 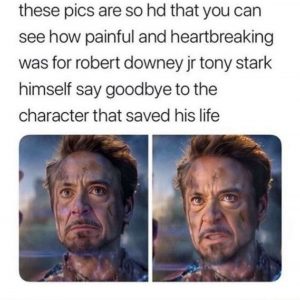 The final moment is when Iron Man is saying his final dialog and all we see are tears in his eyes. And it’s not just because it is his last moment as Iron Man but also it is him saying goodbye to the character that literally saved his life.

Iron Man is the character that saved him from his substance abuse and gave him a new life and career.

Natasha and Tony smiling when no one was 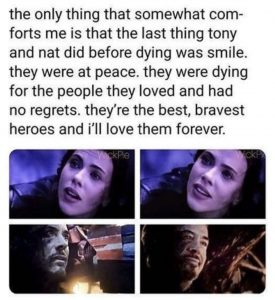 In the last moments of Tony and Natasha where they are taking their last breath, we find them smiling. And this is because they know that they are dying for the people they love and always wanted to protect.

This is a heartbreaking moment and we will always love them and remember them for their sacrifice.

Iron Man is respected by all 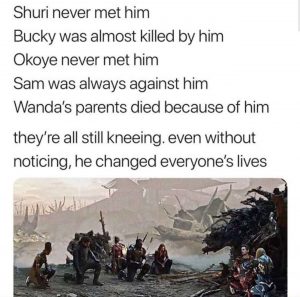 We find other Marvel characters kneeling to Tony Stark and paying him respect for his sacrifice. Neither Shuri nor Okoye met him. Bucky was almost killed by him. Wanda’s parents died because of him. Sam was always against him.

But still, they are kneeling to him, respecting his legacy and sacrifice.

Avengers grieving in their own way 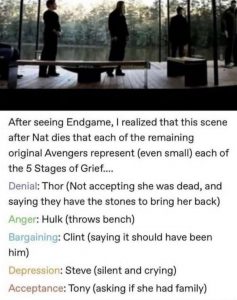 Fans noticed that after Nat died, we see the original Avengers grieving in their own way. And each of them represented the 5 stages of grief.

Thor representing Denial. He was not ready to accept the death of Nat and wanted to use the stones to bring her back. Hulk representing Anger. He just throws a bench. Clint representing Bargaining. He said that he should have been dead instead of Nat. Steve representing Depression. He was silent and crying, internalizing his emotions. And Tony representing Acceptance. He was the one who asked whether she had any family. 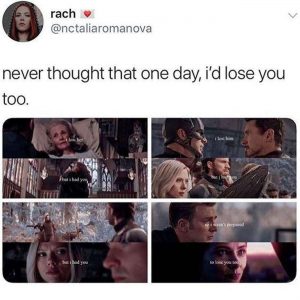 No matter who Steve lost, he always had Natasha by his side. So, he wasn’t prepared to lose Natasha ever in his life. And that’s the reason why he was so silent and crying at her funeral. This was his heartbreaking loss that nobody could ever fill.

Tony Stark- Just the man in a suit 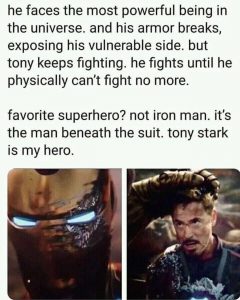 When we see Tony Stark in his armor suit, we always look at him as Iron Man. One of the strongest avengers, we find him facing the strongest and powerful being in the universe.

While he was fighting Thanos, his armor breaks, and his vulnerable side is revealed. This vulnerable side shows us that he is just a man in the suit. A brave, courageous and determined man who wants to kill this powerful being and save the universe.

So, if you ask us who is our favorite superhero? It’s not Iron Man but Tony Stark, the man behind the suit.

Natasha choosing her own destiny 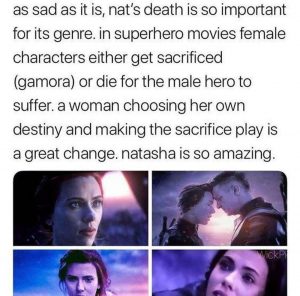 We all know that Nat’s death was very sad and we are still not ready to accept it. But her death is so important not just for the storyline but also for the representation of female superheroes.

Most times, female superheroes die or get sacrificed for the male hero to suffer. But Natasha chose her own journey and destiny. She died for the right cause and because her sacrifice played a huge part in the grand schemes of things.

She was the woman who came, who saw, and who conquered our hearts! We will never forget her.

The color of Hulk’s face slowly draining away 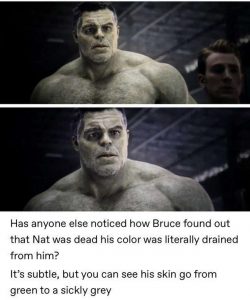 Hulk shared a different and unique bond with Natasha. And her death definitely shook him. We can significantly see this when he first hears the news of Natasha’s death.

Once a bright green Hulk slowly starts turning into sickly grey. We find the color slowly fading away as the news of her death sinks in. 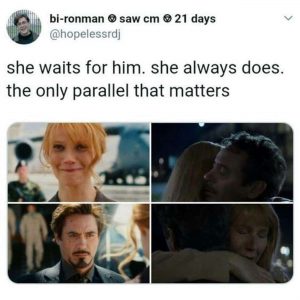 If there is one woman who will wait for Tony every single time, it’s Pepper Potts. She is literally his anchor. No matter the situation she has always waited for him. And that’s the only thing that matters! They surely are each other’s soulmates!

Do you think we covered all such heart-wrenching moments of the original Avengers? Do you have some more to share with us? Comment down below.