A few months back the internet, memers and all the comic lovers went in complete awe when the image of baby Yoda surfaced through social media. This green-colored munchkin has managed to melt everyone’s heart away and we can’t just get enough of it. On the other hand, the famous logo from the 2004 feature film “the punisher” has also gained satirical popularity. President Donald Trump was on a campaign rally recently when some of his supporters thought of making some quick buck by sending merchandise as they always do. That’s when the merch with “baby Yoda” and “the murderer” surfaced.

What happened at the prez Trump rally?

President Donald Trump who is currently the hot cake of the town and politics went for a campaign rally at the University of Wisconsin-Milwaukee’s Panther Arena. Amidst the rally packed with Trump’s supporters, the eyebrows of star wars and Marvel fans were raised when they saw two merch with images of baby Yoda and logo of “the murderer.” Apparently, when asked the vendor was not very happy with the sale of the merchandise and it was below his expectations. 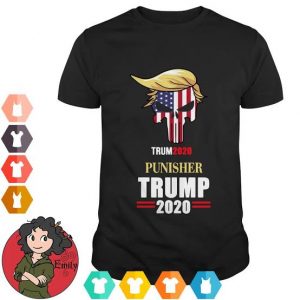 The baby Yoda character is loved worldwide and hence the black market merch started to build up as well. Disney and Lucasfilms decided to keep the baby Yoda merchandise a secret; but with toy catalogs and merchandising, the cat doesn’t always stay inside the bag. The image of baby Yoda t-shirt with the message of “great America keep” is one such product of black-market merchandise. 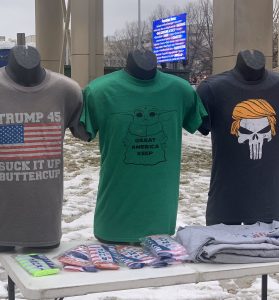 In-depth of the merch!

The baby Yoda is a character from Star Wars: The Mandalorian which streams on Disney+. The merchandise is a green colored T-shirt with a black silhouette of baby Yoda with a caption written on it. The other merchandise of “the murderer” was the classic logo but with President Trump’s trademarked orange-colored hair on top of it.