Annabelle Comes Home is filled with several tensed moments that build to heart-stopping jump-scares as young Judy Warren (Mckenna Grace) tries to seal away all the evil spirits that have been released from her parents’ storage room.

Some unforgivable pot holes in the Film

However, as she, her babysitter Mary Ellen (Madison Iseman) and the stubborn friend who let the entities out in the first place, Daniela (Katie Sarife) scurry around to fix the mess, we find the movie isn’t just filled with demons and monsters, but some unforgivable plot holes as well.

Early on, the three girls start experiencing weird stuff that clearly indicates spirits are roaming free. When Judy sees the Annabelle doll teleporting in the house, even appearing in her room, she simply prays it away. The same goes for the Bloody Bride, who actually stalks Judy and locks her in her room for an attack.

Mary Ellen breaks the girl out but the fact Judy doesn’t alert her or Daniela for their own safety is dumb. She goes about her birthday sleepover like nothing’s happening. Mary Ellen also should have been alert already because she encountered a creepy girl at the front door asking for Annabelle just before, only for her to disappear in thin air. This actually happens right after Judy educates them on the evil in the house so it shouldn’t take much to connect the dots.

Last but not least, the nosy Daniela had let the spirits out by fiddling around with all the objects in the demonic storage, hoping she could establish a connection with her dead dad. Minutes later, when they’re all outside, she sees him in the house and runs in. She doesn’t bother to tell the girls anything at all, though, which emphasizes if they hadn’t treated all these experiences with such secrecy, they’d have saved each other a lot of trouble. This is all plot convenience to have the girls haunted when night falls.

Judy really sucks at letting her parents know what’s going on in her life. It’s clear she has “true sight” like her mom, especially after her first brush with the doll in The Conjuring. But her powers are ramping up as she sees a dead priest at her school incessantly. When Mary Ellen asks her about why she’s being weird on the premises, Judy doesn’t say anything.

It gets worse when her parents head out of town, so one has to wonder why she simply didn’t call them and let them know what was up. Hauntings by a priest in broad daylight are pretty serious, yet Judy seems to feels her parents won’t understand. Yeah, the expert demonologists won’t get it, right? It’s compounded when Judy sees the doll and Bride at home wandering around, as one would think at this point she’d call her parents during the day. Instead, she hopes they’ll go away.

Instead, she waits for the night when things get bad, only for a ghost to tap into her phone line, intercept the call and mimic her mom’s voice. It’s a highly-advanced telecoms spirit tormenting them, apparently, but still, Judy could have contacted them earlier from her school during the day, especially as she had her protective cross to ward off the priest. As for the night, when their call got jacked, for some reason breaking out of the home and calling from a neighbor’s house — like Mary Ellen’s crush Bob (Michael Cimino) — just doesn’t cross their minds.

But they still appear to be controlled by Annabelle — doing her bidding and trying to kill the three girls. Ultimately, they do get their hands on the doll and lock her in her case, made from the glass of a chapel, which severs her connection to the spirits. But it’s pretty odd that this causes all of the other spirits to vanish and go back into the room, too. It makes no sense because they should still be free, and just no longer under Annabelle’s thumb.

They’re independent spirits outside of the doll, so why would her being locked away do the same to them? It’s pretty ridiculous and just comes across as a quick way for director Gary Dauberman to wrap up the film. We’re left to assume that Annabelle’s glass case is apparently the equivalent to the Ghost Trap used in the Ghostbusters franchise, sucking back in all the entities as if it were horror magic. 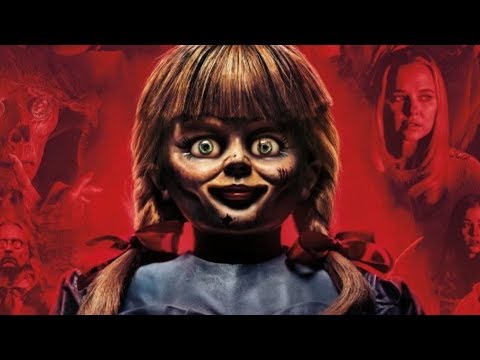