A new trailer for Annabelle Comes Home is out now. The film will be conjuring some scares in a more fun fashion than in the earlier films, as the haunted story of the origin of Annabelle silk is on its way to the big screen. It’s the third film in the franchise and the next expansion of the universe of Conjuring previously launched by James Wan. 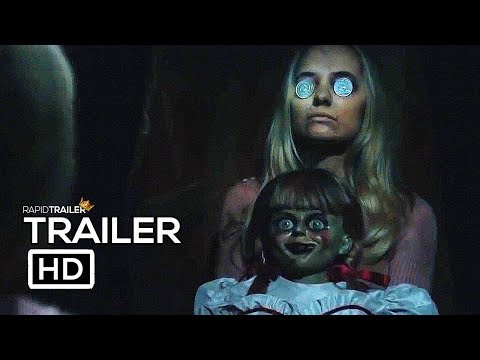 Getting Lorraine and Ed Warren back with Vera Farmiga and Patrick Wilson reprising their roles. The new life comes with a refreshing tone as the third film will to capture all the scares but will also focus some moments of humour while not totally crossing the line of becoming a horror comedy.

“[Director] Gary [Dauberman] and James [Wan] and myself just thought this was the opportunity that the third Annabelle movie was the opportunity to really raise the stakes,” producer Peter Safran told ComicBook.com on the set of Annabelle Comes Home. “Also, the opening scene of The Conjuring…It opens up on the half face of Annabelle. We just always liked the idea of, ‘Well, what happened after they left there? We see them taking the doll. What happens?’ It was something that other people had asked us in the past as well and we just thought we’d explore that story.”

Will Be Set Between The First Two Conjuring Films

Annabelle Comes Home will be set between the events of The Conjuring and its sequel. Newcomers in the franchise Madison Iseman and McKenna Grace were seen shooting on a live set which revealed that the film will capture the horror vibe. The character of Iseman is a babysitter who entertains young ones with a board game, before a doorbell sets the tone. As the camera sets on the mystery box game and hole where players reach their hands, it’s certain that something creepy is on its way.

“I’m not a huge fan of horror comedies but I love comedy in my horror if that makes sense, so I like moments of levity,” Dauberman said on the set of his directorial debut. “So I’m leaning to that a little bit more on certain moments because I find if we hit those moments where people laugh and then get scared right away I’d like to try and lay on that. I’ve been playing around with that a little bit more. And it just fits the girls too because they’re so upbeat that sort of teenagers world in a house sort of thing we’ve been trying to capture too.”