Annabelle Comes Home is the third movie in the Annabelle series that deals with the Conjuring Universe’s malevolent doll.

The latest chapter in of the spinoff focuses on Judy (Mckenna Grace), the daughter of supernatural experts, the Warrens, as she and her babysitter Mary Ellen (Madison Iseman) face various entities unleashed in her home by a nosy friend Daniela (Katie Sarife).

They experience tremendous adversity but eventually seal the doll back in its glass case in the Warrens’ famous storage room. Seeing as she was the beacon that agitated all these spirits, the demonic activity immediately ceases, but sadly, in such a rushed and convenient ending, the film actually ends up wasting its best monsters.

Yet the conclusion comes so quickly, you can’t help but feel short-changed, wondering why we weren’t subjected to more of these monstrous minions throughout the course of the flick. After all, Annabelle spends most of the movie sitting down, teleporting from room to room, so it stands to reason you wouldn’t get much action out of her. The other more mobile entities should have had more prominence as they’re, well, actually doing stuff!

In the final act, the Bloody Bride possesses Daniela who touched everything in the storage room hoping to make a spiritual connection to her deceased father. This scene feels like the first Conjuring movie when Lily Taylor’s Carolyn got possessed, but with an updated visual twist as the young girl looks like a mix of the Nun, Valak, and the La Llorona bride. She’s driven to violence, using her knife to attempt to kill Mary Ellen, but Judy simply turns on the projector so one of her dad’s recorded exorcisms stops Daniela dead in her tracks. Like a deer caught in headlights, the prayer freezes her and pulls the demon out in a very anticlimactic sequence.

While she’s getting exorcised, though, the two nastiest monsters in the film attack Judy and Mary Ellen in the storage room as they try to find Annabelle. The Horned Devil (something which looks straight out of the Angel TV series) attacks Judy and when Mary Ellen tries to intervene, it uses its telekinesis to slam her about the room, changing the entire complexion of the film. At this point, it’s a full-blown horror joint as opposed to a tame supernatural thriller/mystery, yet it doesn’t last more than a minute as Judy finds a cross (the franchise’s go-to Deus Ex Machina) and places it on the beast’s forehead, incinerating it. With something so scary-looking and powerful, not to mention new to the Conjuring Universe, one has to ask why director Gary Dauberman decides it doesn’t deserve more screen-time.

Lastly, right after this fight, Mary Ellen is sucked into the Ferryman’s room where she has to traverse a labyrinth of his dead victims with coins on their eyes. She eventually meets a woman resembling her, a past victim of his who doesn’t want to let the Annabelle doll go. With the girl lured in, though, just as the Ferryman attacks, the screen cuts to black and all we hear is scuffling. The doll is eventually thrown out the room to Judy, and Mary Ellen emerges battered a few seconds later, but again, why build the character and his legion of the dead up if we’re never going to see them unleash hell?

Again, this could have subverted the zombie trope and given us Mary Ellen brawling with her doppelgänger to really bring out the cerebral essence of the story — fighting your own demons to survive. Instead, everything interesting is wrapped up in a hustle and bustle, giving us an underwhelming ending.

Sadly, Dauberman pivots the movie on its most boring and overdone aspects — sleeping people getting pulled around by ghosts, windows shattering, lights flickering on and off — and for whatever reason, he doesn’t capitalize on the potential of demons that would have painted a much more gruesome, nail-biting picture than a doll who simply creeps you out with an eerie smile.

About the Star Cast 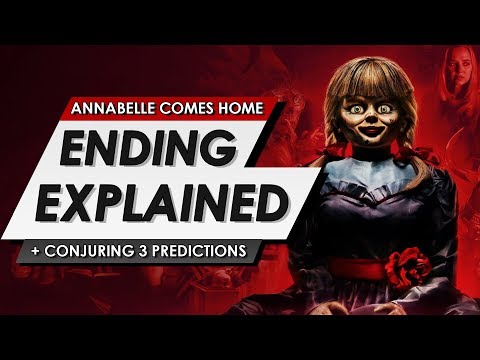