Entertainment weekly’s upcoming issue is all about the upcoming DCEU movie Aquaman, and it just gave us the first look at Nicole Kidman’s character Queen Atlanna.

Jason Momoa is, of course featured on both the covers of the magazine. First cover, meant for subscribers of the magazine, features momoa’s face, which is drenched in water and there’s a second one for news stands featuring Jason Momoa, Nicole Kidman’s Queen Atlanna, who appears to be wearing something that resembles a regal bodysuit with a weird looking crown, rather that the bad ass looking armor her son and Mera donned in the earlier films. 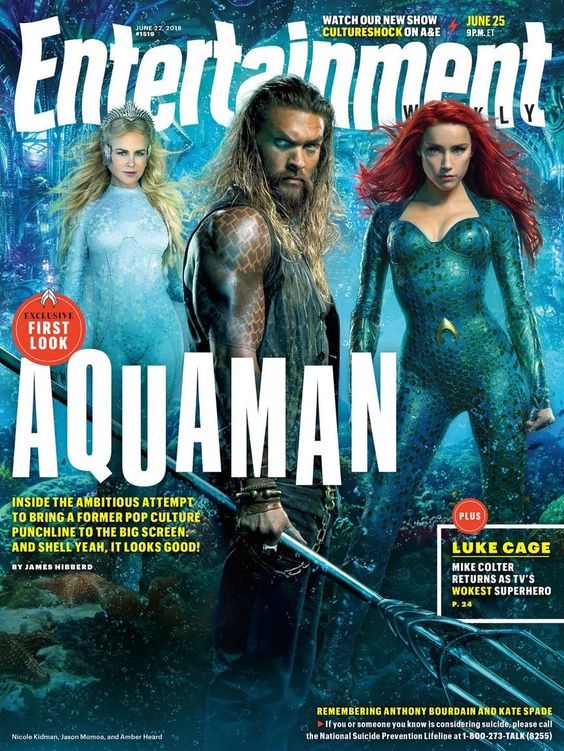 Aquaman will be the first film after Justice League, and though a lot of plot details are still unknown to us, what we do know is that the film is set after Aquaman saved the world from Steppinwolf and founded the Justice League.

Becoming the king of Atlantis against his own will, he gets caught up in a epic battle between his people and the surface dwellers, the film also involves both the classic villains, Ocean Master and Black Manta, from the Aquaman’s rouge gallery. There’s also a rumor of the first official trailer arriving next week, which will definitely answer a lot more questions fans have about the movie.

The movie is set to release on Dec. 21, starring Jason Momoa as Aquaman, Amber Heard as Mera, Nicole Kidman as Queen Atlanna.