Some of the biggest Marvel news was dropped in the year 2020. It was announced that War Machine/ James “Rhodey” Rhodes will get his own Disney+ TV series, Armor Wars. Nothing much was said about the show at the time. In fact, most people were clueless about what Marvel is planning with the tv series in its Phase 4.

However, the current interview given by Don Cheadle who plays the role of War Machine clears the picture a little bit. If you know Armor Wars, you might already know that the story in the comic book is heavily centered around Tony Stark. In the comic book, he fights off some of his iconic enemies such as Justin Hammer to avoid the misuse of Stark Tech. 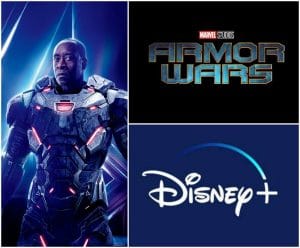 But in the interview given to AP Entertainment, the actor hints at a heavy focus on the role of War Machine in the MCU. Don Cheadle calls it an interesting take on the character and his journey in the MCU. Though he also says that the production team is still figuring out what elements have to be explored for the character in the upcoming TV series.

Since Marvel fans haven’t seen much of James “Rhodey” Rhodes/War Machine in the movies, it would be exciting to see an entire series focused on this seemingly obscure character of this superhero universe. Also, Armor Wars comes after the exit of Robert Downey Jr.’s Tony Stark in Avengers: Endgame. This also increases the need for the production team to be more creative with the story arc for this Disney+ TV series.

Armor Wars is set to start filming probably in the next year. Most of the other intricate details about the series are kept under wraps. It remains to see how close the TV series will be to the actual comic book, but the death of Tony Stark will certainly be a major part of the storyline.

Don Cheadle will star in Armor Wars; however, the release date is still unknown.