Arrow will end tonight, with a heartfelt finale and a final farewell to Oliver Queen (Stephen Amell), who became something else and saved his city after five years in Hell and eight seasons on the comic world. There will possibly be a lot of sentimental write-ups of the finale and rose-colored looks back at the series — and we’re here to tell you that it deserves every bit of the love that it’s going to get in the coming days and weeks. Arrow, while (like its heroes) never perfect, was a smart, fun, and ambitious show that stretched the barriers of what grounded, gritty comic book adaptations could do on television while also jump-starting a revolution in the way casual viewers perceive superhero shows. 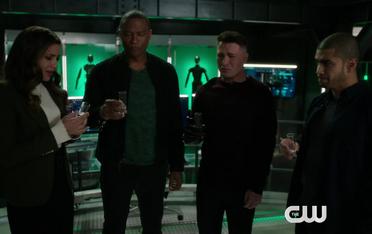 Some fans were skeptical of producers Greg Berlanti and Marc Guggenheim’s involvement, which would have been understandable enough: a year or so before Arrow hit the airwaves, executive producers Berlanti and Guggenheim had been two of the credited writers on a critically-panned film adaptation of Green Lantern. The pair, Guggenheim later revealed during a Comic-Con International panel for his 2014 novel Overwatch, had requested that if their pitch for a Green Arrow pilot, then called The Hunter, did not go forward, the general public would never even find out they pitched on it.

It’s from that place that Arrow managed to transform the way fans fundamentally, and studios saw comic books on television. Even as the universe around it began to expand and explode, Arrow managed to retain its visual style and unique personality. It was a challenge, no doubt, to set up a world where there were time-travelers and aliens while still feeling like a grounded story about a small group of people standing against corruption in their city was the center of that world. There were hiccups from time to time, but in general, it worked very well.

After tonight, Arrow is gone — but it leaves behind a legacy that almost no other show can match. It deserves every nostalgic, rose-colored word of praise it’s going to get because, without it, the comics-on-TV landscape could potentially look very, very different today.