Attack On Titan has been gaining a lot of traction these past few weeks. Fans are head over heels on this anime, calling it the greatest cult classic of this decade. Here are a few fan arts on the popular anime we wish were real. Hopefully, the creators of the anime see this and incorporate it into the final season next year. 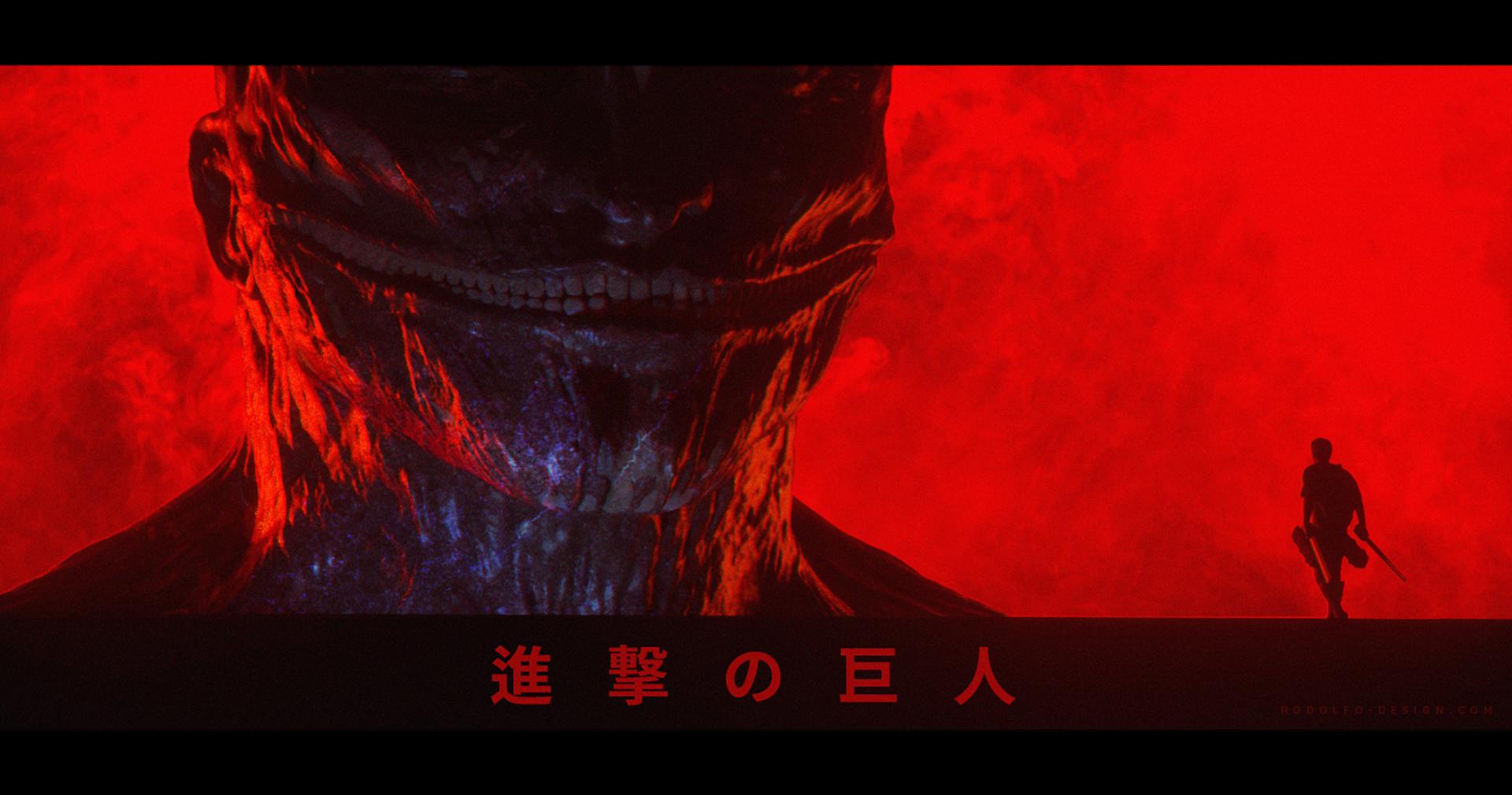 The Titans are humongous creatures. Even the smallest of them towers over the tallest of men. But not many Titans have what it takes to tower over the Walls built by the Eldians. The only Titan with the size to dwarf Wall Maria was the Colossal titan. The warriors of Paradise island have been fighting these Titans for years. But none of them hold a candle to the might of the Colossal Titan. Just take a look at that stupid grin. That guys’ so smug. He knows he is unbeatable and there’s nothing we could do about it. The very steam his body releases could fry an entire town in seconds.

Also Read: Attack On Tita May Compel Mikasa To Make a Heart-Wrenching Decision 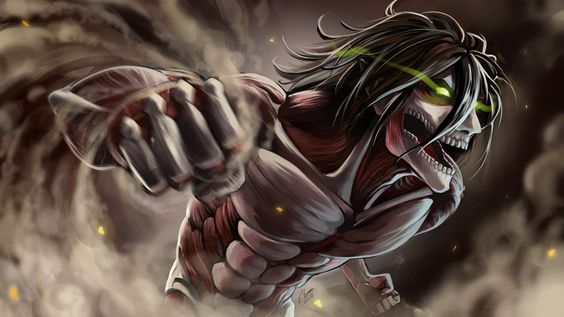 The Rogue Titan belongs to Eren Yeager. The Armored Titan belongs to Reiner. With hardened bone plates making up a super durable exoskeleton, the Armored Titan is a huge walking tank. No weapon in the universe could pierce its armor. The Armored titan uses this ability to great effect. He easily broke in through a wall using his sheer momentum. Imagine if the elusive Rogue Titan and the invincible Armored titan could combine their powers. We would have a force of nature amongst our midst. 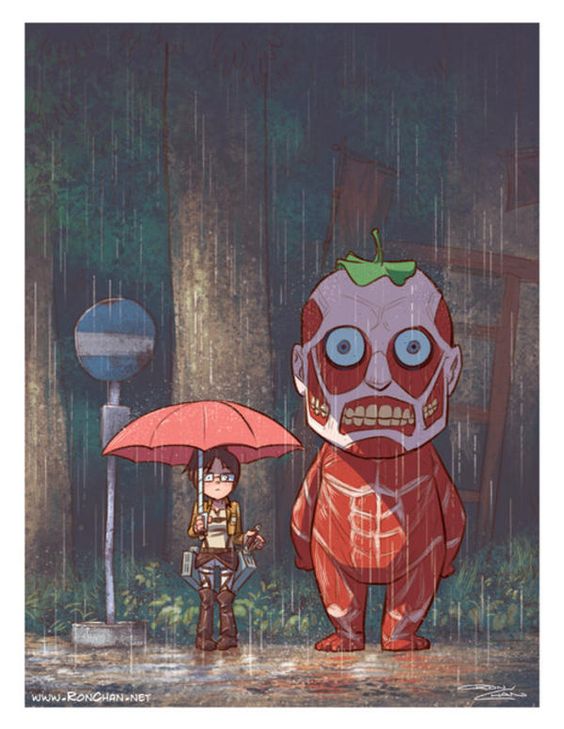 Its always good to see a well made crossover between two established universes. Studio Ghibli is one of the most well-known names in the world of anime. With the help of the legendary Hayao Miyazaki, it has become a force to be reckoned with. Movies like Spirited Away and Howl’s Moving Castle are no longer just names, they evoke unprecedented emotions. This fan art combines a popular Studio Ghibli classic – My Neighbor Totoro, with Attack On Titan. The result is ingenious and hilarious at the same time. 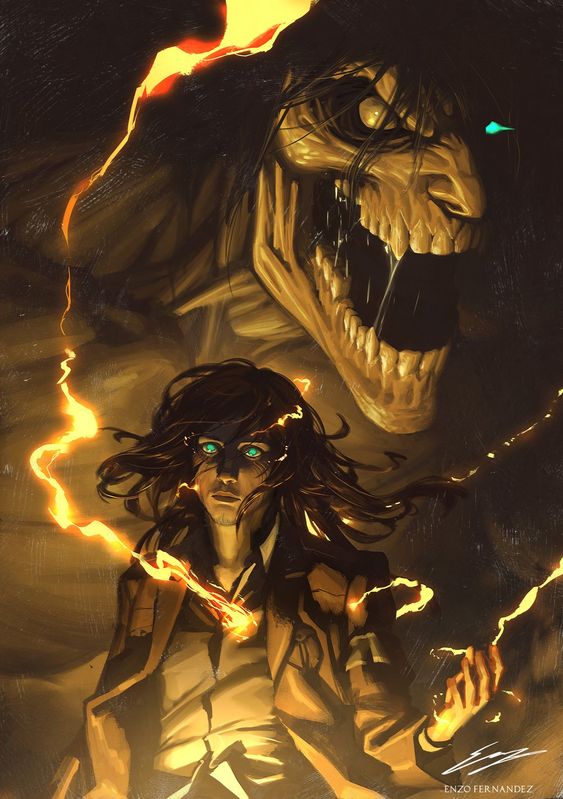 When Eren returned after his transformation, he was a leader of an entire movement. The guy exhibited charisma and leadership in levels we never thought he could. With the power of the Founding Titan in his grasp, Eren can do anything. But it all started with the Rogue Titan. The yellow lightning crackling through his Titan form’s fists is a nice touch. Would love to see this fan art turned into an anime still in Attack on Titan season 4 Part 2 set for release in 2022.

A Little Bit Of Rain Doesn’t Hurt Anyone 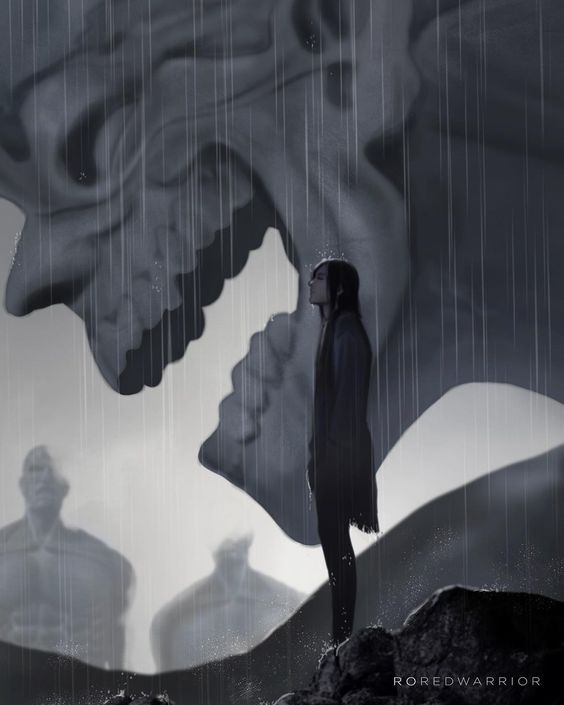 This fan art is subtle and breathtaking. Eren is taking in that rain as if it is a sigh of relief. He has been through so much. And he still has a long way to go before reaching home. The Yeagerists are on the move. But no matter what the outcome of the upcoming battle, Eren still looks up to the clouds when its raining and tries to find himself in the sky. The Titans are behind him, ready to attack and kill at his command. It’s a powerful piece of fan art.

Get Ready To Rumble 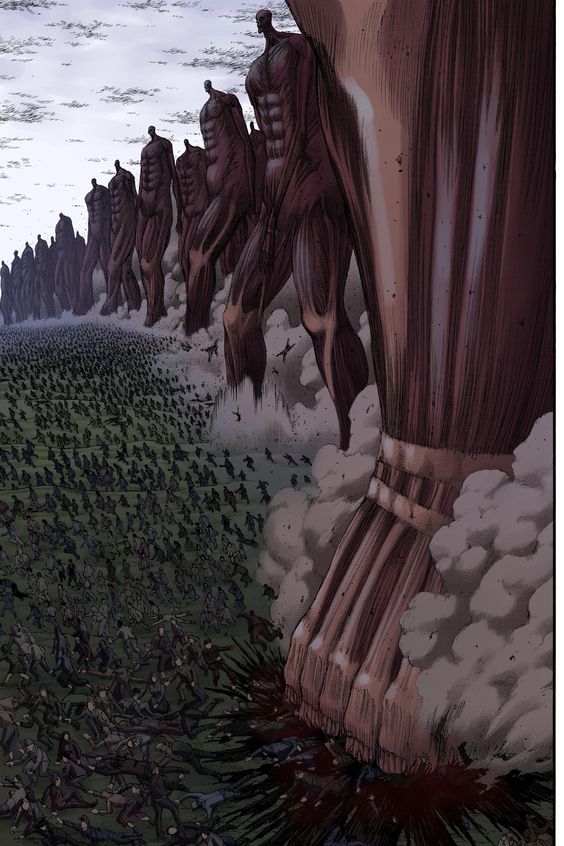 In the world of Attack On Titan, the apocalypse is not an asteroid or a world-ending virus. It is something far too unpredictable. The Rumbling is the last resort for the Eldians. If there is no other option left, Eldians will be transformed into Colossal Titans by the person holding the power of the co-Ordinate. And then they will be ordered to walk the Earth. The end of days will literally be a mass stampede. Humanity will be stomped under the Colossal Titan herd’s feet. Pretty sad and weird way to go right?!?!? This fan art shows how the Rumbling might actually look like in the anime.

You May Also Like: Anime’s 10 Strongest Sibling Duos, Ranked 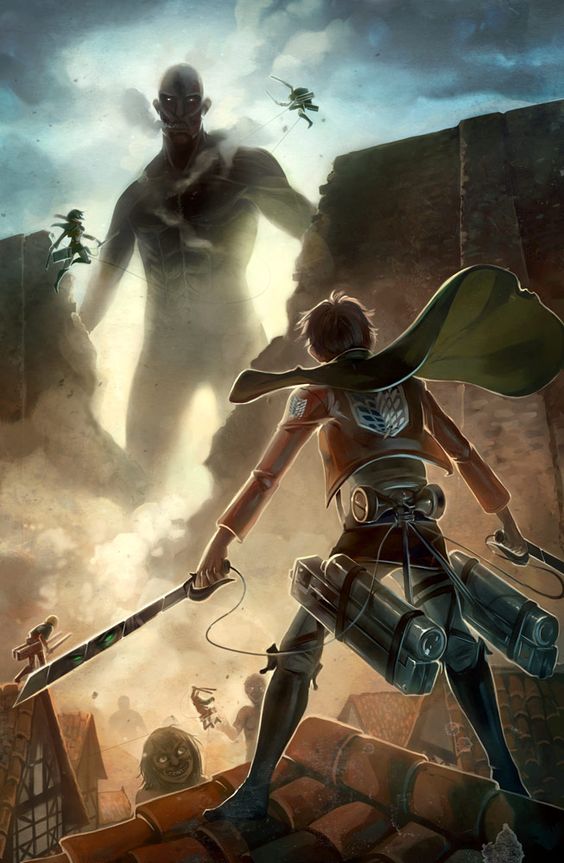 brings back a flood of old memories, doesn’t it!! When Wit Studio first made the anime, they had no idea this thing would be this huge. Attack on Titan, in its fourth season, is considered one of the greatest anime series of all time. And it all began with the Fall of Shinganshina district. The Titans overwhelmed the Eldians and massacred thousands. Look at the helpless Corps member looking at the Colossal titan as the latter literally looks down on his enemies. Does anybody have a time machine so that we could go back and re-experience Attack On Titan from scratch?

Shadow Of The Colossus 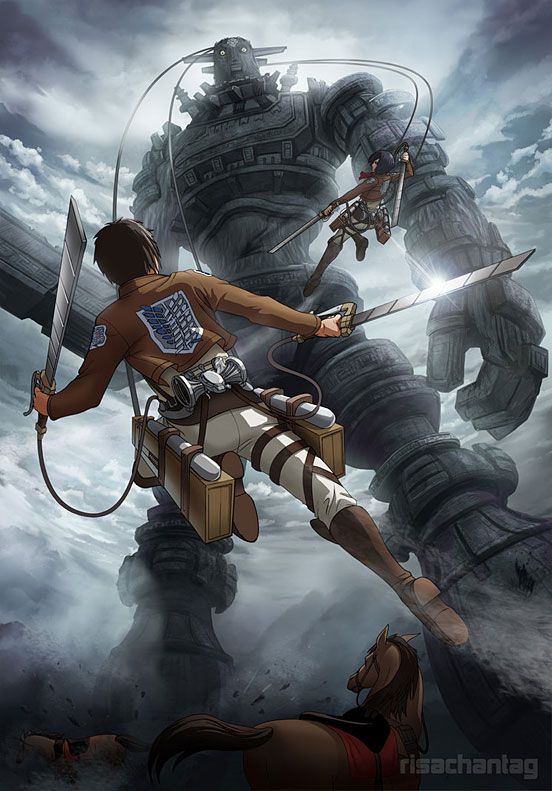 Shadow Of The Colossus is an award-winning game developed by Sony for the PlayStation. It has garnered a cult classic status over the years. And so has Attack On Titan. The plot for the game involves the player fighting colossal giants and defeating them. Sounds very familiar to the anime don’t you think? Makes us wonder what would have happened if the Survey Corps members had taken on the Colossal monsters from the game using their ODM gear.

Mikasa Will Never Give Up On Eren 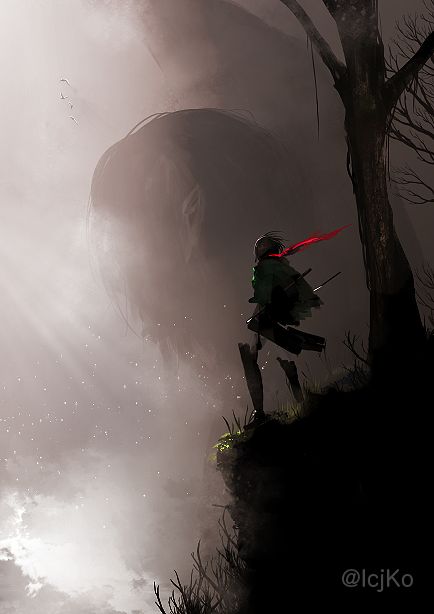 The headline itself justifies the fan art. Eren and Mikasa may have their differences. But they’ll always remain friends. That red scarf pops right out in front of that bleak brown background. The Rogue Titan’s silhouette could be seen in the distance. A powerful image. Will Mikasa fight Eren to save him from himself? Or will she join him in his impossible quest to rid the world of humanity? 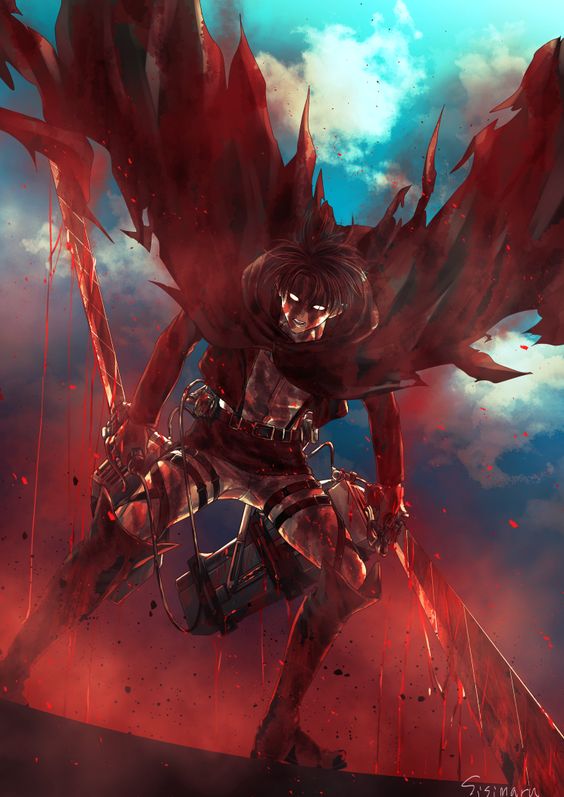 Granted there’s no Titan in this picture. But after looking at this image, do you think we did a wrong thing by including this fan art? Levi Ackerman is one of the meanest badasses in the history of badasses. When he struts, the entire world bows down in awe, fear, and respect. And when he gets serious, he makes the entire world burn in pain and agony. Give him a working piece of ODM gear and a little bit of maneuvering room, and he can kill an entire army in a flash, Titan or otherwise.

Attack On Titan In The 21st Century 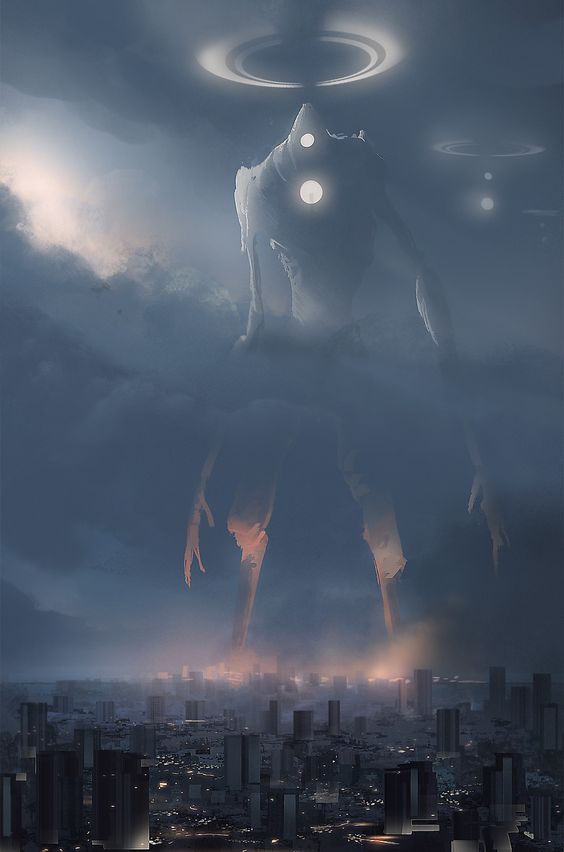 What would happen if Titans started popping up today in the modern world? Luckily we have weapons powerful enough to take them down. But what if the Titans were prepared? They would have evolved into something far more dangerous. And boy do they look incredible in their new ultra-modern form!!!