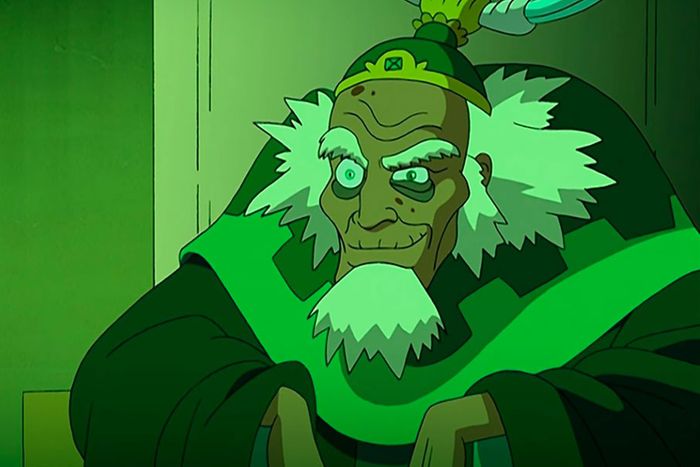 Whine all you want but King Bumi deserves all the respect he could get. He is older than most of the characters featured in Avatar: The last Airbender. He lets his feeble appearance fool most of his enemies who could never suspect the fact that Bumi, an elderly Earth Kingdom royalty, is one of the greatest Earth-Benders of his time. Even Azula got fooled by Bumi’s appearance. His strange shenanigans and antics make him a laughing stock in a few scenes. But he shows promise. It is a pity we did not see more of King Bumi in the show.

Related: Avatar: The Last Airbender – What Happens After Final Episode 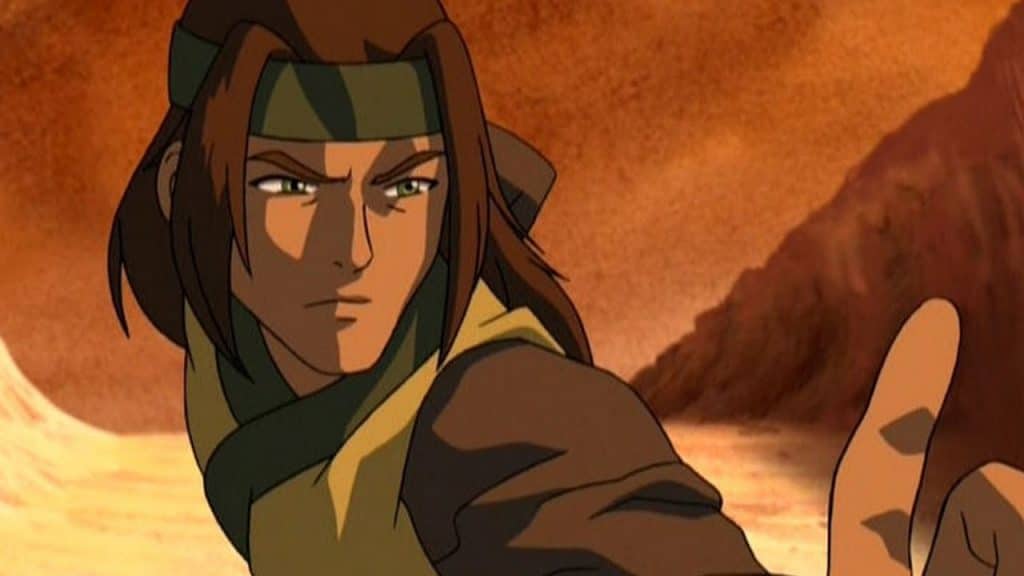 Haru stole the heart of the woman who in turn stole the heart of the lead protagonist of the series. A good natured chap, Haru failed to show up in more than a few episodes. He did manage to leave his mark. It would have been cool to see Haru join Team Avatar and kick Fire Nation butt. It is no surprise why it was Haru who stole Katara’s heart first before she met Jet. Frankly speaking, having Haru in the big picture would have made for a way better story arc. 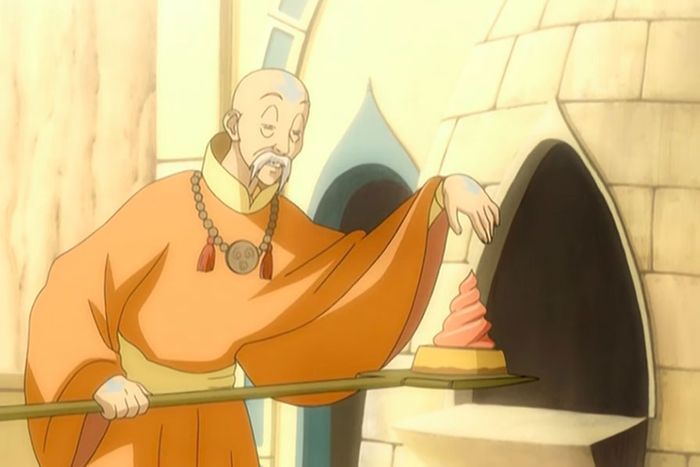 Not many Air Nomads survived the Fire Nation’s onslaught. Only one Air Nomad survived. Apart from Aang, we don’t know any other prominent Air nomads in the show. The flashback sequences were generous enough to give us a glimpse at some of the many Monks that practice Air Bending. Monk Gyatso was of course the show stopper of those flashbacks. His playful nature and his friendship with Aang was heart-warming and unlike the super serious monks of the Air Temple. Gyatso proved that Aang had a good life before the Fire Nation soldiers took everything dear to him and he was forced to start afresh. 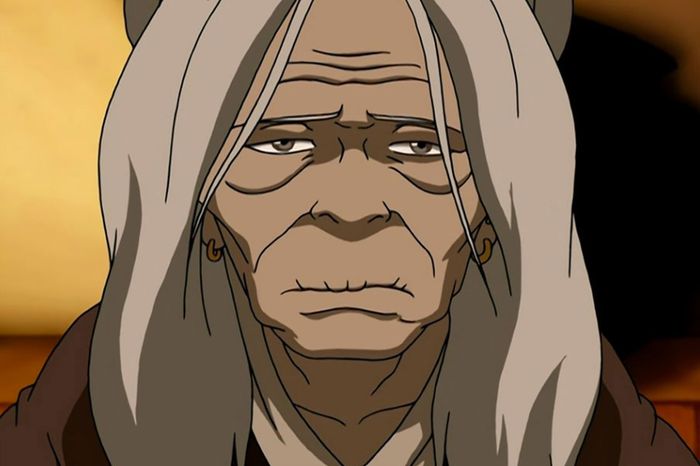 Like King Bumi, Hama is a frail old woman who lives in seclusion in a corner of the world. And like Bumi, she lets her appearance become her greatest weapon. Hama, unbeknownst to everyone, is the greatest water bender of her time. Her skills in water bending allowed her to develop the art of blood bending. This is an ability she honed while she was kept in prison. The spookiest character on this list, Hama’s art form would lead to the birth of a style that even gave Avatar Aang in his physical prime a run for his money. The big reveal of Hama’s skills was one of the creepiest moments of the show. Her influence in the world of Avatar was so strong that it ended up affecting the world decades later during the Legend of Korra story arc. 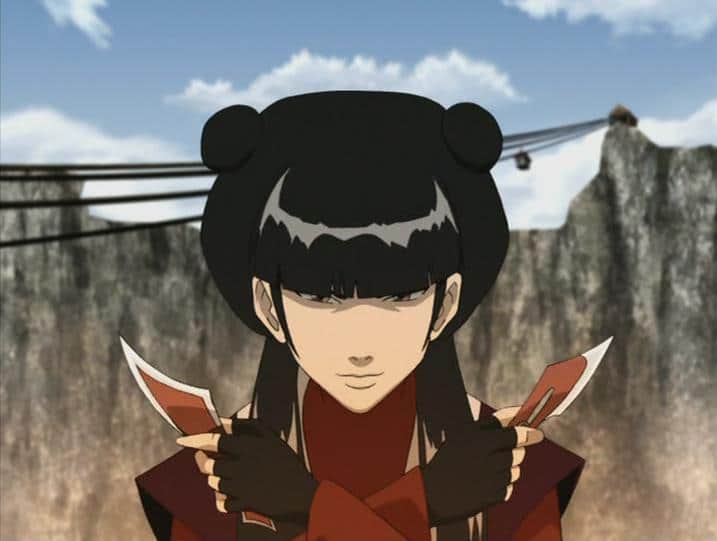 Avatar does not do a very good job of highlighting some minor characters that had very good potential. Mai was one such character who could have been explored in detail. She was side-lined primarily owing to the fact that she was seen as Zuko’s love interest. But she was much more than that. Mai had a personality of her own. She could be rebellious if needed. She even had a funny persona, something she barely showed on screen. Her skills with throwing knives and shuriken were second to none. Mai’s link to Zuko was a good thing for Zuko but not for her. She ended up living under the Legacy of the Fire Nation Prince’s Shadow. The reason Ty Lee made it to the list is because she did what no other character could barely do – defy the stereotypes. She was pretty and upbeat. She wore pink and acted very girly. But when push came to shove, Ty Lee proved that she was the most formidable non-bending warrior of the Avatar Universe. She used pressure points on an enemy’s body to neutralize him. Her martial art technique could even be used to subdue the bending powers of a foe for a temporary time period. Ty Lee even had one hell of a character arc. She ended up joining the Kyoshi Warriors. Everybody loved Ty Lee even when she was part of Azula’s trio. When she switched sides and became one of the good guys, everyone liked her even more. 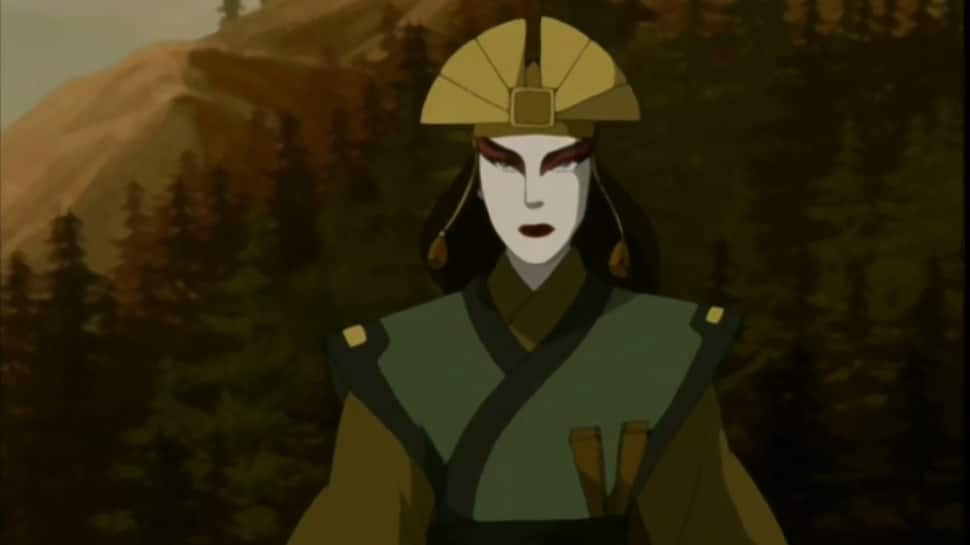 She only appeared a handful of times throughout the series. But Avatar Kyoshi had the most impact on Aang’s journey to become the new Avatar. Apart from having feats not even her ancestors could have accomplished, Kyoshi revealed herself to be a joyful woman with a penchant for humor. She was strong-willed, level-geaded, and had a ‘take no prisoners’ attitude. There is little surprise why the creators of Avatar decided it was time for a book to be written featuring Avatar Kyoshi. She was just too awesome to be side lined. 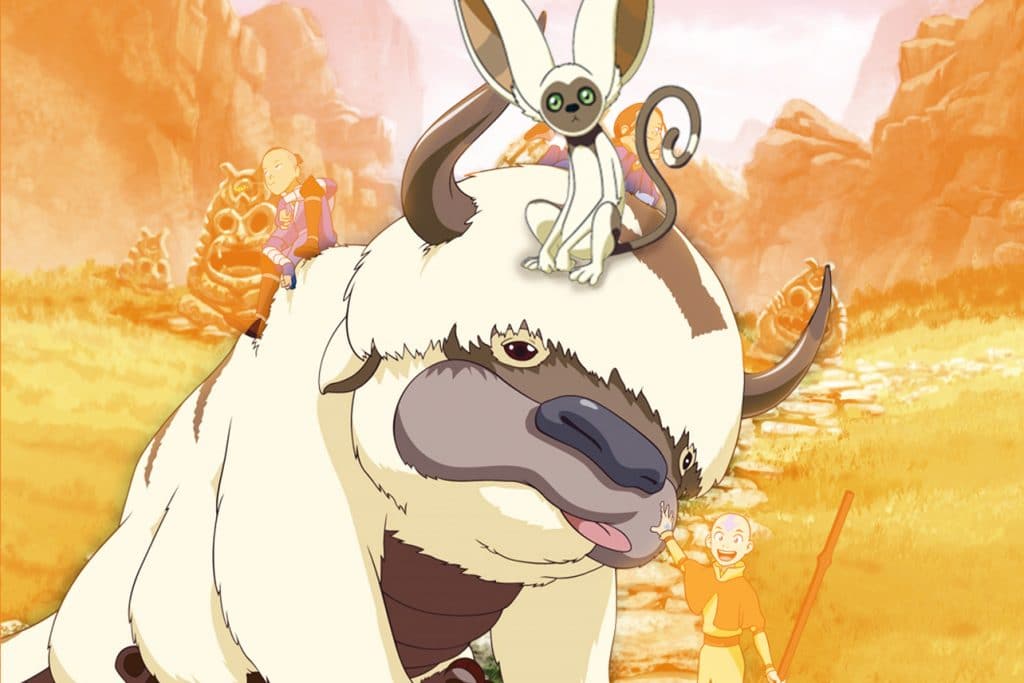 The original good boys are back. There were so many moments when we did not know whether to gush over the cute looking pets or do we need to start worshiping them. Without the pet duo, the series would have suffered some major setbacks on the cuteness quotient. They also helped add some comic relief to the series as it became darker and grittier as more and more episodes were released. Even though they were not human and had zero lines in the series, they had a huge impact on the viewers.

You May Like: Avatar: The Last Airbender Spends 15th Anniversary 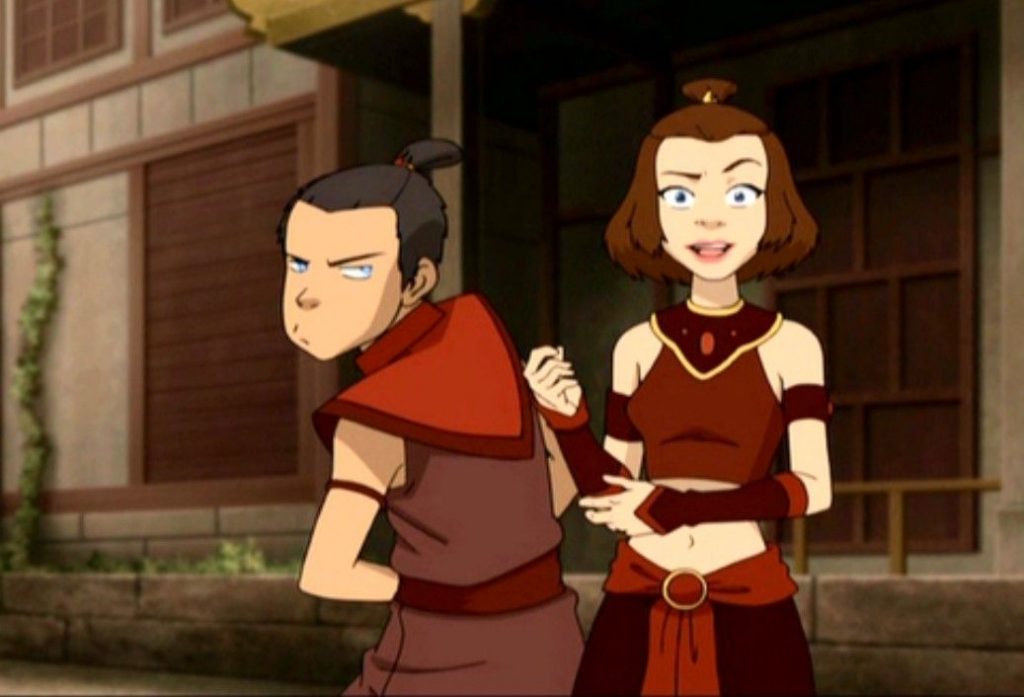 While not exactly a core character of the show, she did have a major part to play in The Last Airbender. A part of the Kyoshi Warriors, Suki was a capable fighter and Sokka’s romantic interest. The only complain we have regarding Suki is that the show did not make her an official part of Team Avatar along with Aang, Sokka, Toph, Katara, and Zuko. Suki is a badass woman. The leader of the Kyoshi Warriors was a brilliant addition to the overall story arc. 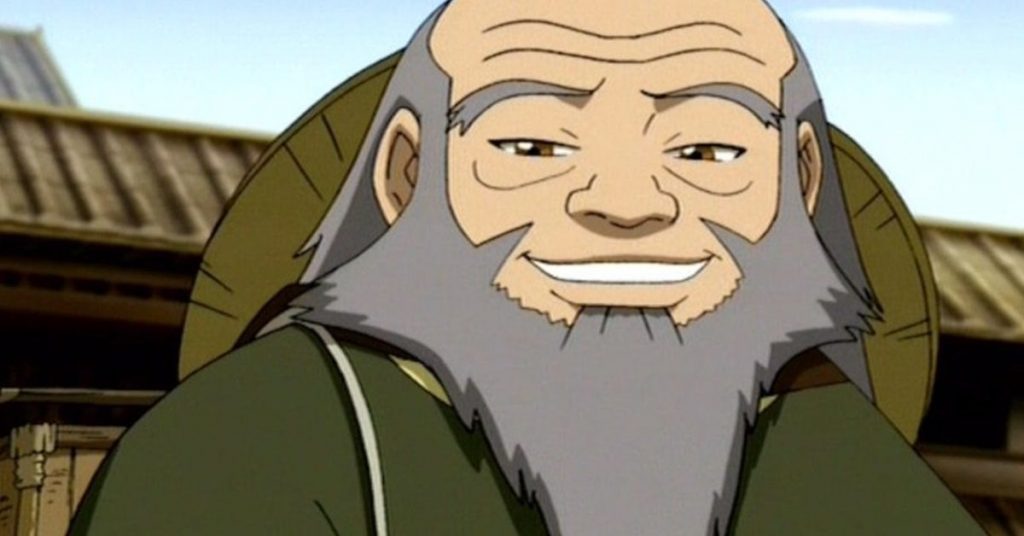 Many would agree when we say this – Iroh is better than any other character in Avatar: The Last Airbender. And yes, that includes Aang too. General Iroh was a legendary commander of Fire Nation’s armed forces. After losing his son, he found new meaning in life. Training Zuko and teaching him to do things differently than he did, it made us worship Iroh for his wisdom. General Iroh was said to be even more powerful than Fire Lord Ozai. But when asked why he would not defeat his brother and take over the throne, Iroh’s answer was that it “wasn’t [his] place”. His humility is what made us fall in love with him. The old geezer knew his way when it comes to winning hearts with mere words. 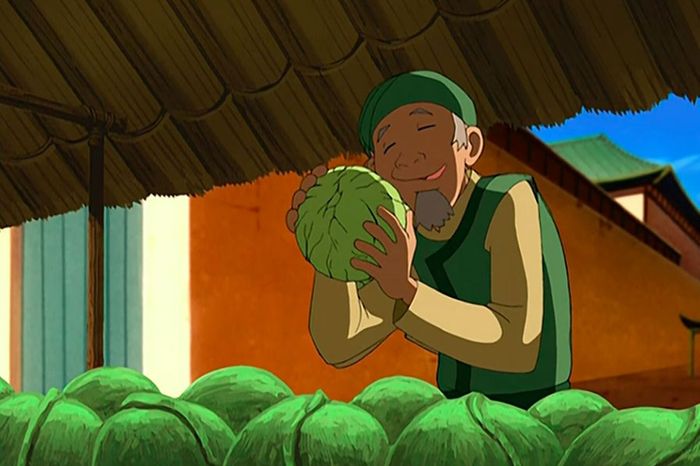 Last but not the least, the person whom we need to shout out for a special mention is the infamous Cabbage Merchant. The Cabbage Merchant was wronged so many times in the show. He just wanted to have a healthy business so that he could put food on his table. Fans of the show consider him to be one of the fan-favorite minor characters in the The Last Airbender series. The Cabbage Merchant gave us a few laughs. But his legacy ended up being the powerful Cabbage Corp, the organization that have Hiroshi Sato’s Industry tough competition in The Legend of Korra series. 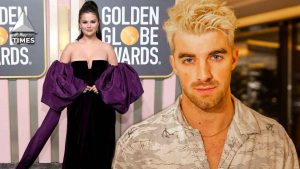