The folks at the Marvel Cinematic Universe are really strict about releasing details of a film before its official release. However, the stars and crew members love teasing fans with hints and information, which often leads to hilarious situations. After Mark Ruffalo and The Russos, Avengers star Don Cheadle took to Twitter to give out “the biggest hint yet” about Avengers 4’s title. However, the hint is that… he doesn’t know the title himself. 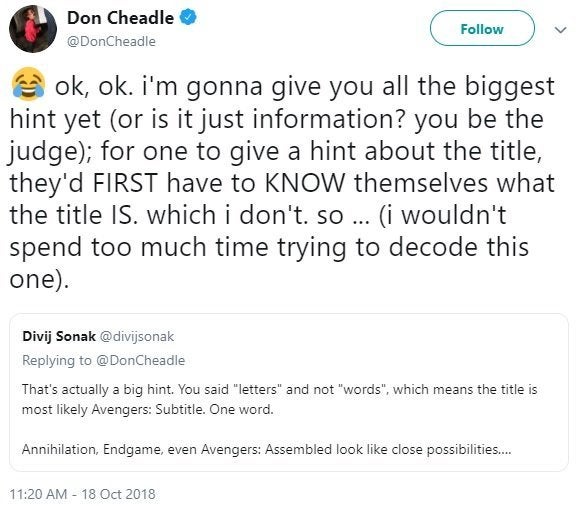 The actor joked, “I’m gonna give you all the biggest hint yet (or is it just information? you be the judge); for one to give a hint about the title, they’d FIRST have to KNOW themselves what the title IS. which I don’t. so … (i wouldn’t spend too much time trying to decode this one).”

This hilarious exchange began when Cheadle took to social media to tease fans by not revealing the title, but explain what the purpose of a film’s title is.

“I shouldn’t do this, but because I love you all so much I’ll give you a hint,” Cheadle admitted. “The title will incorporate letters that will be organized in a coherent fashion with the express purpose of communicating to the consumer the content of the film. (I’m in so much trouble…)”

One fan even took it forward by over-analysing it by replying, “That’s actually a big hint. You said ‘letters’ and not ‘words,’ which means the title is most likely Avengers: Subtitle. One word. Annihilation, Endgame, even Avengers: Assembled look like close possibilities.”

Another fan noted that Cheadle’s tweet focussed on the words “first”, “know” and “is”, hilariously predicting that the film’s title could be, “Avengers: First Know Is.”

“The funny part is how many people are out there in the Twitterverse trying to unscramble FIRSTKNOWIS like an anagram … I’ve said too much,” Cheadle pointed out.

It’s evident that the stars are taking a dig at fans with the title reveal. However, Cheadle was earlier involved in a reveal from Mark Ruffalo about Infinity War, way before the film made its way into the theatres.

This happened during an interview with Good Morning America last year, where Ruffalo revealed the ending for the film saying “half” before quickly changing it to “everybody dies.”

All questions will be answered when Avengers 4 hits the theatres on May 3, next year.