Batman has always been portrayed as someone who is quite unsentimental and powerful and critical ; but we fans adore him for these very same reasons. Apart from these traits , he even has a mysterious personality . Batman is usually scary and tough and is someone who can easily scare you off. So looking up to him as anything else is rather difficult. He became an orphan at a young age and maybe that is what made him this kind of a person.
But surprisingly, batman has also a soft side which is often ignored .
These qualities make him a really good role model.
We understand that is it hard to imagine a scary and tough guy being nice but he actually is ! He can be rational and soft when he is expected to be !
After all behind that suit, there lies a human who has gone through his own set of hardships !

Ace , a member of Royal Flush Gang had reality bending powers, due to which she is often compared to Wanda Maximoff by the Marvel fans ; according to them ,  she is the DC version of Wanda. Her health was deteriorating using her powers and she also neared an aneurysm resulting in to her death.
She knew her end was near and was scared being all alone and she asked Batman to stay with her until she died. Batman realized that irrespective of everything , Ace was just a child who had a tough childhood . He did not judge or harm her ; instead he spent time with her and held her hand on the swings !
Ace died a peaceful death all thanks to Batman !

In Batman : The Dark Knight # 11 , Batman is working on the investigation of  Commissioner Gordon’s kidnapping . It was done by none other than Scarecrow. There had been many victims who had been kidnapped . One of them was a Clair , a young girl who was one of the most recent kidnap victim.  She had gone through a lot for her age and as result she was scared and discouraged most of the times. Batman had to talk to her in order to acquire details regarding the kidnapping.
Now talking to such young children is a difficult task. In order to please children, we have to often become a child ourselves and be friendly with their favorite tough toys . Now it is weird to imagine Batman talking to a soft toy right?
But he did it ! He calmly spoke to Clair and even spoke to her Ducky – her soft toy. Seeing Batman being warm and nice , Clair got the courage to speak to Batman and she ended  up giving as much details as she remembered.

The Riddler is one of the most iconic Batman villains . He is creepy as well. In Batman # 454 , Batman was trapped in series of riddles. In one of the riddles, the baby had a ping pong put down in this throat by The Riddler. This was a deadly thing to do as the baby would choke and die.
Batman realized this and without giving much thought started working on trying to save the baby’s life. Despite of realizing that a rusty knife could cause an infection to the baby leading to its death, he still takes the chance and goes ahead to cut open the throat and remove the ball. Further he presses the wound on the neck tightly and rushes to the nearest hospital where by the baby is saved ! That was quite a job Batman did under immense pressure !

7. Guiding Child To Not Walk Down The Wrong Path

There are some wars that even the world’s greatest heroes can’t solve. In Batman :War on Crime, our hero faced one war of the same kind. But he did not give up. He tried to approach it ata n individual level and tried to eradicate it from the ground levels.
He at one point of the story comes across Marcus , who had also watched a robber kill his parents just like Batman. It was a relatable situation for Batman.
However, Marcus was less fortunate and lived in poverty and as a result he was pulled into a gang at the mere age of eight years. But Batman , talks him out of it. He chooses his words with utmost care and with his love and compassion and Marcus realizes the mistake. Batman further also decides to help the entire neighborhood , so there are no more cases like Marcus.

In Batman : Black and White , there was a story about a woman who was always scared of Batman and used to have consistent nightmares about him based on her trauma she recollects being from her childhood. She goes to the therapist and it was later realized that she was kidnapped at a young age of 5 and was then  rescued by Batman. Since she was young , she must have thought of Batman being scary with his suit and all. But to make her more comfortable , Batman after the recommendation of therapist meets the woman and hugs and consoles her. If that was not enough, he also was darling enough to return her stuff toy. His actions meant a lot to the woman.

5. Realizes And Corrects His Mistakes !

In the The New Batman Adventures , Robin scolded Batman who went way too far because he attacked a man and even interrogated him in front of his family.
Batman realized that it could have left an ugly memory for them and he realizes his mistake and even makes amends to correct it. The man was a crime henchman and of course holds a grudge against our hero but Batman vows down to make things right and offers him a job at Wayne Enterprises so that Henchman Connor can live his life with dignity. That was a great gesture from Batman.

4. When He Consoled Robin !

Batman was shown as a harsh and cruel person in All Star Batman and Robin, The Boy Wonder.
He was cruel to Dick Grayson throughout the entire story and that is why particular moment has a lot of significance as it showcases the emotional side of Batman. H
Batman blames himself for not giving enough space and time to Robin to overcome the death of his parents.
So Batman himself takes Robin to his parent’s grave and hugs him tightly. Robin ends up crying in his arms and it is wonderfully portrayed.

In Justice League #33, Jessica Cruzis forced to accept The Ring Of Volthoom. She ends up allowing the ring to take control of her and that creates chaos that ends up harming her and everyone else.
Batman usually would just fight the criminals but here he decides to be considerate and understands that Jessica was a victim. He ends up talking to her and calms her down. And that works !

2. Has Empathy For Everyone ; Including Villains !

In Batman : The Animated Series ,  Batman escorts Harley Quinn to an Asylum and on the way she asks him why would he save her . Batman stated that he understands how important it is to rebuild life and wanted her to have that chance as well. He recollects of him having a bad day and that shows us lot about Batman. He no matter what never gives up on villains . He thinks that at the end of the day, villains are humans and they can still change for good. 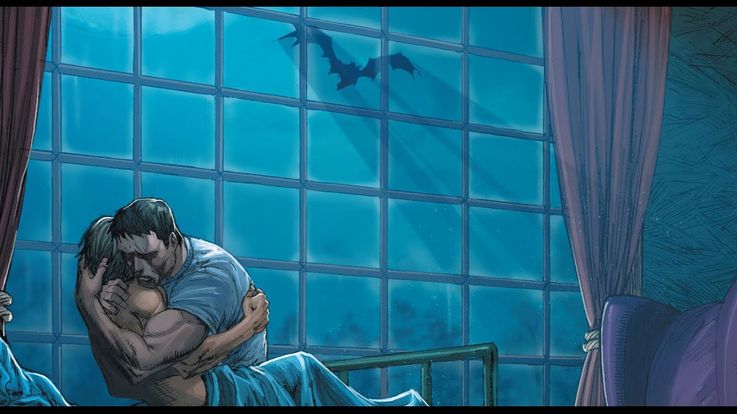 In Red Hood and The Outlaws #3 , Jason Todd has a lot of anger towards The Joker and when he met him face to face and that didn’t end up good for him as his face was drenched with acid.
Bruce knew what feels for a kid to mess up and scolding or getting angry at them won’t help. So when Jason woke up , the first thing he did was apologized to Bruce but Bruce just went ahead to give him a big hug. Of course that was the most important thing for Jason Todd at that point of time.
Batman aka  Bruce Wayne is a big softie behind that suit.