There is a longstanding saying in the DC comics, “With just enough prep time, Batman can defeat anyone. Batman can capture anything. And he has got a contigency plan for just every scenario that could ever be possible. Storing explosives in his teeth fillings, constructing and planning elaborate plans to take down an entire empire is just some of them.

But its time Batman goes way beyond it. Scott Snyder, Mark Morales, Jim Cheung, Tom Napolitano and Tomeu Morey has launched Justice League # 1, which breaks every possible barrier, as our heroes prepare for the worst.

Vandal Savage and his Neanderthals have undone this entire world. Assessing this situation and considering the appropriate course of action, newly appointed Justice League leader Martian Manhunter conveys this message to Batman in his telepathic way. 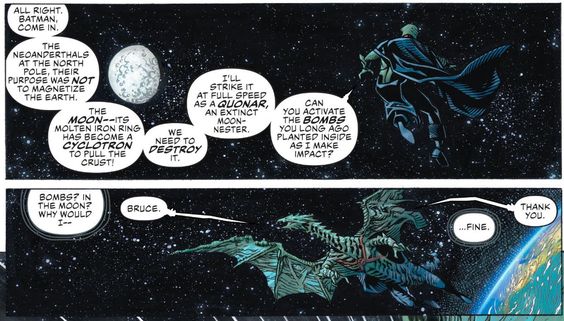 “The moon. Its molten iron ring has become a cyclotron to pull the crust! We need to destroy it.”

So, to save the planet from being destroyed, J’onn transforms into a giant dragon called a Quonar. As soon as he is about to strike the moon with great force, he makes a request to Batman.

“Can you activate the bombs you long ago planted inside (the moon) as I make impact?”

And Batman says in his own Batman whisper , “…Fine.”

So, Batman had actually hidden a bomb inside the moon? Well, this is kind of outlandish to imagine. But we know that the Dark Knight has set up a secret secondary Bat cave on the moon surface in the past.

The World’s Greatest Detective has got a contingency plan for just about anything possible. And this tale is just a classic example of it. Simply the ‘BATMAN’ thing.