Things are not looking up for the Justice League during the on-going Death Metal arc.

The heroes of the DC Universe are waging a war against the Goddess Perpetua.

But Perpetua is revealed to be the least of their worries. Right under their noses, a new threat has emerged.

This threat threatens the sanctity of not just Earth but the entire Multiverse.

The Batman Who Laughs has made his eventual return after his demise. His resurrection comes at a huge price for the cradle of creation.

The Batman Who Laughs now has new abilities after absorbing the powers of Dr. Manhattan. He now calls himself The Darkest Knight.

The Darkest Knight will stop at nothing to annihilate all creation and remake the multiverse in his image. 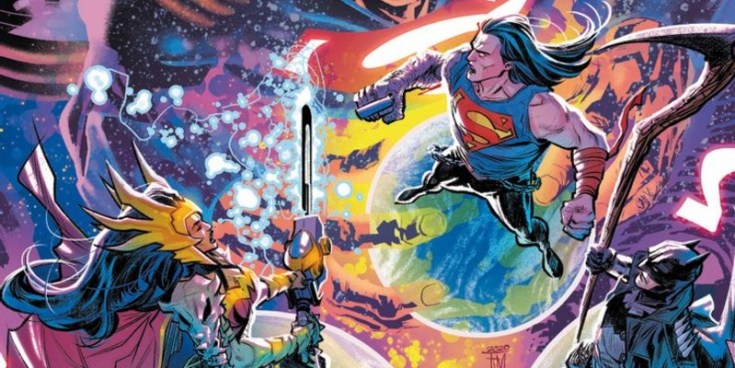 In the first issue of Death Metal, Wonder Woman uses a specially made weapon to take down the scourge that was the Batman Who Laughs.

The Dark Knights of the DC Universe had already set in motion events so that they could bring the legendary villain back from the dead.

The resurrection of The Batman Who Laughs was inevitable. But it was the way in which he is being brought back that raises a few eyebrows.

His brain will be put into the body of another evil Batman from the Dark Multi-Verse. This is where things get interesting. 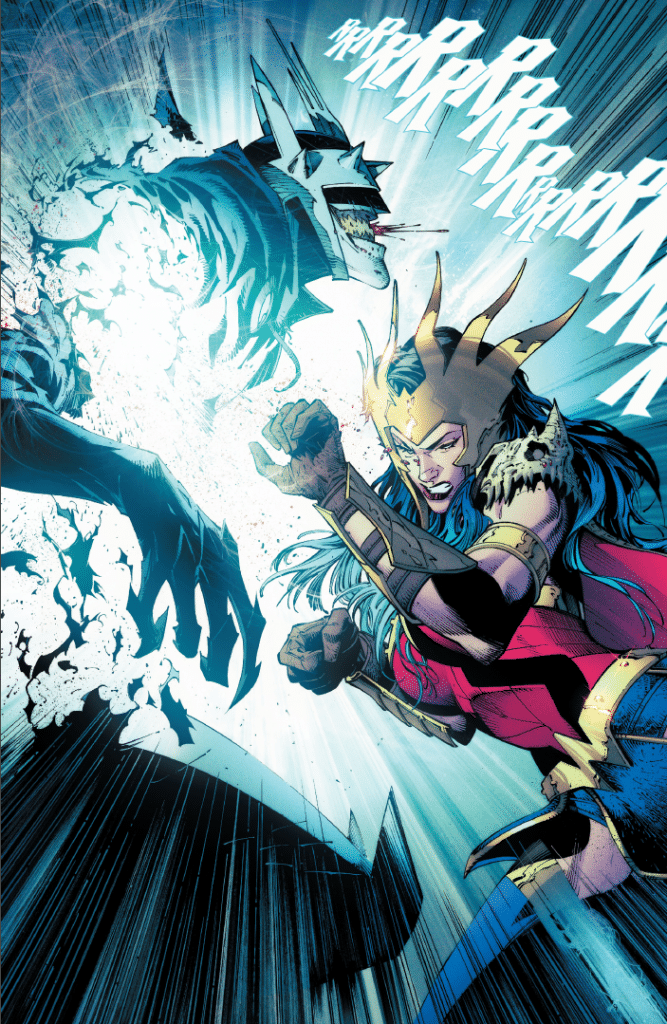 The evil Batman that will host the Batman Who Laughs brain is none other than the one known as ‘Bathattan’ – the evil Batman/Dr Manhattan Hybrid.

When Wonder Woman leads a platoon of heroes to defeat Perpetua, one of the heroes senses a grave disturbance in the fabric of reality.

This disturbance, according to said her, has a threat level greater than the Goddess Perpetua her-self.

Death Metal: Trinity Crisis #1 sees Wonder Woman coming up with her own plan of action to contain the threat of Perpetua and her army of the evil Dark Knights.

Her plan involves locating the nexus of energy that is supplying Perpetua with all her power. The heroes intend to infiltrate Castle Bat and then triangulate the location of Perpetua’s power source.

They start their journey to the fortress – Perpetua’s stronghold. While on their way, one of the heroes senses a threat far greater than Perpetua.

This new presence exhibits a quantum of evil no villain in the DC Universe could ever radiate. 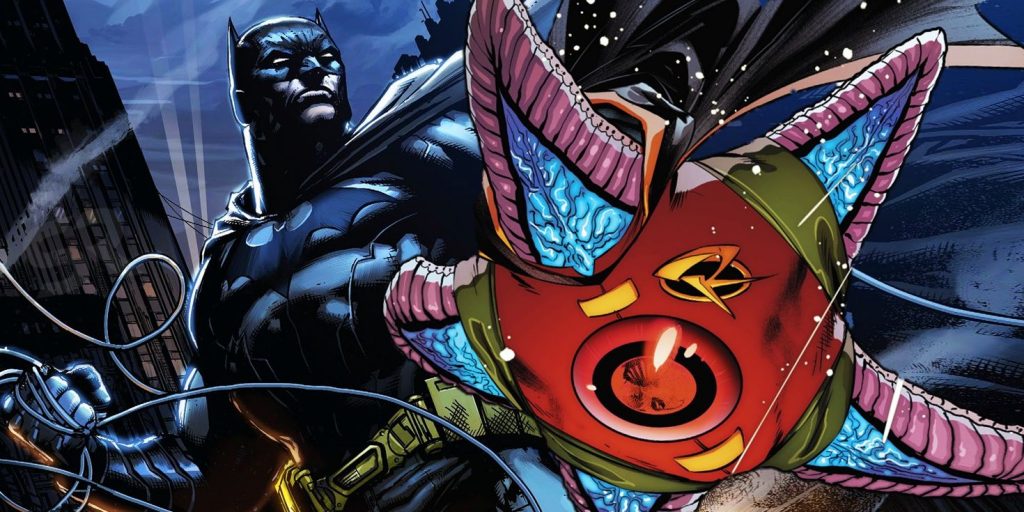 Jarro, who is part of the contingent of superheroes being led by Wonder Woman to storm Castle Bat, is the DC Universe’s greatest telepath.

He is the most powerful psychic to ever exist in the DC Universe. The tiny alien was grown from a tissue sample of the Alien Conqueror Starro.

Raised by Batman and taught the ideals of the nobility of kindness, Jarro was different than its parent. He was benevolent and a force for good.

He also inherited the powerful psychic abilities of his predecessor along with other powers like bio-fission, size alteration, flight, regenerative healing factor, and a host of other powers.

But it was his ability of telepathy and mind control that made him a valuable asset to the Justice League. 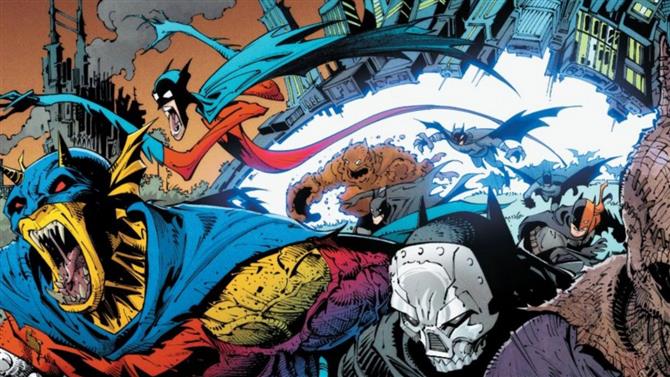 In Death Metal: Trinity Crisis #1 , Jarro comes to encounter a rather sinister presence.

He states that the “Batman Who Laughs has become…..something much worse”.

As nasty and malevolent Batman Who Laughs was, to say that he has not only returned from the dead but also become a hundred times more diabolical and sinister than he used to be is truly saying something.

The Batman Who Laughs’ corpse was captured by the Dark Knights.

They wanted to resurrect him to be added to their ranks. In order to ensure he does not die again, they needed to give him a small power boost.

You May Also Like: Every Reason Why The Batman Who Laughs is Scarier Than the Joker!!

So they chose the body of a Batman-Dr Manhattan hybrid from the Dark Multi-Verse called the Bathattan.

Their plan is to place the brain of the Batman Who Laughs into the body of Bathattan, creating a monstrosity of epic proportions.

The being known as Bathattan had his origin story revealed during Death Metal: Legends of the Dark Knight #1.

In a parallel universe set within the Dark Multiverse, Bruce Wayne aka Batman found the Comedian’s pin.

The pin, which contained traces of Dr. Manhattan’s energy was extensively studied by the Dark Knight.

He then reverse-engineered the intrinsic field generator that gave Dr. Manhattan his powers and then became the first test subject.

The experiment went horribly wrong but just like Dr. Manhattan, Bruce Wayne rearranged his own atoms and resurrected himself.

This is a version of the Batman nobody would like to mess with. 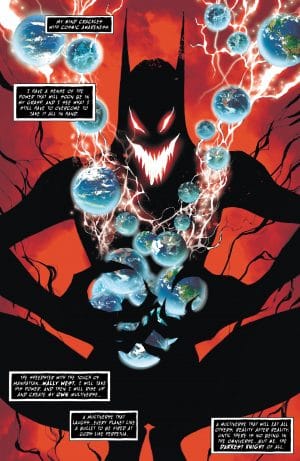 This is the power of The Batman Who Laughs. Since his brain is in now control of Bathattan’s body, there is literally nothing the Justice League could do to take him down.

The heroes of the DC Universe do not know the true name of this new threat. They refer to him as “the Darkest Knight”. Wonder Woman still nonchalantly calls him “The One Who Laughs”.

She does not use the term “Batman” anymore whole addressing the evil Batman because she also does not know what this nee evil Batman hybrid has become.

Nobody knows what the Darkest Knight intends to do and what is his endgame. 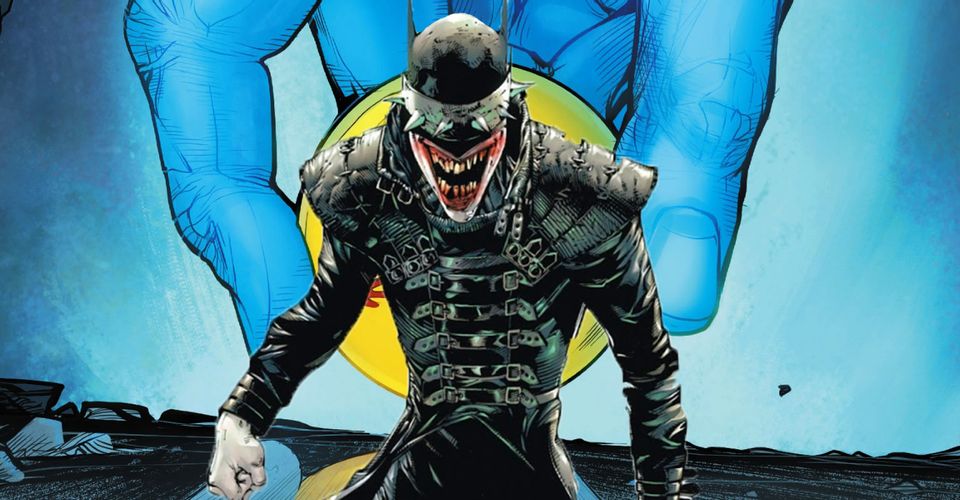 The powers of the Darkest Knight allow him to traverse the Multiverse at will. He has the power to rewrite history and change the fabric of reality.

With Bathattan’s powers, the Darkest Knight intends to go back and forth between the Multiverse and the Dark Multiverse.

He has set his eyes on Wally West, who has also recently acquired the powers of Dr. Manhattan. His plan is to absorb Wally’s powers and become stronger than the Goddess Perpetua.

The endgame of the Darkest Knight is to destroy the current multiverse and create a new one, one made in his image – where chaos reigns supreme.

The objective of the Darkest Knight is to amass enough power to become not just the strongest entity f the Multiverse but “The” strongest that ever was, is, or will be.

The heroes of the DC Universe are yet to meet the Darkest Knight. When they finally do, they might be in for one hell of a surprise.