19th July 2003 was an eventful day for the DC Universe as Teen Titans first aired on Cartoon Network. The show got a fantastic response as it had everything that the children of the early 2000s wanted. Kids finally had the chance to see young heroes who shot lasers and star bolts while gobbling down pizza and worrying about zits. Each character displayed a perfect combination of heroic strength and teenage vulnerability. As the show went on, the episodes showcased fantastic character arcs and explored mature themes such as racism, democracy and abusive childhoods. 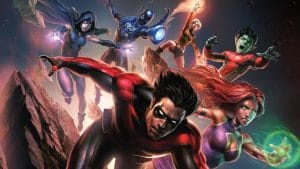 The Teen Titans were never intended to be a part of the DC Extended Universe. Even if the characters were loosely based upon the comic counterparts, their storylines were changed from noir to vibrant. However, it seems that the producers could not help themselves and snuck in quite a few Batman references concerning Robin, the intrepid Boy Wonder. 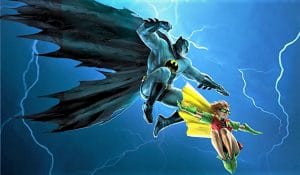 Robin is the leader of the Teen Titans, and he is most definitely the first Robin, Dick Grayson. We can surmise this from him appearing as Nightwing in “How Long is Forever?”. Cartoon Network’s Robin is much more serious than Dick from the comics, yet both Robin iterations share a troubled yet deep bond with Batman. In the first season itself, Robin utters the phrase,” I already have a father” in front of Slade. This is an apparent cut reference to Bruce Wayne, who is shown as a father figure to robin throughout the comics. The second reference is that Robin has to steal something from a building that looks familiar. The Boy Wonder engages in a fight with the Teen Titans, and by the time he’s finished, we are treated to a wide shot of the Wayne Enterprises building. The “A” and the “Y” are broken, but it’s clear that Robin has a lot of guts stealing from his old mentor. 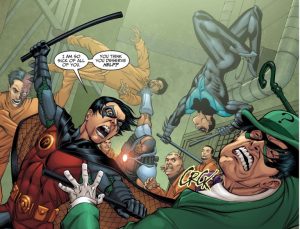 Another reference occurred when Robin activated a hallucinatory drug that makes him see Slade. The villain’s presence haunts him, and the drug makes him see things from his past. We can see his parents falling off the trapeze and then comes the candlelight oath which Robin took to fight for justice. This is the third Batman reference as it was done in the presence of the caped crusader.

Robin’s martial arts skills are well known, but when he s defeated by a villain named Kataro, his paranoia kicks in. He starts to search for a master, and when Cyborg offers to train him, he says that he has learnt from “the best”. It is an apparent reference to The Dark Knight. Another reference occurs when Robin confronts a thug who nearly reveals that it is The Batman that should have confronted him. He does not tell the name, though, and the sentence remains incomplete. After all, Batman’s legacy is one of mystery and darkness, and his invisible presence in Teen Titans makes him all the more ominous.

Here is a trailer of the 1997 Batman and Robin movie: