Batman’s identity and the secrecy maintained behind it is one of the most common storylines that DC Comics has presented. However, the mystery has such a hype among the readers that every time it is introduced in the comics, it has come up with a new twist and a new character dealing with it. The Joker has been in the middle a couple of times, and so has been the Riddler. Still, writers Peter J. Tomasi, Brad Walker, Andrew Hennessey, Brad Anderson, and Rob Leigh have recently introduced the secret with the Dark Knight’s most personal foe: Harvey Dent.

In the issue Detective Comics #1021, readers are introduced to the intriguing character of Two-Face, which is Harvey Dent, one of Bruce Wayne’s closest allies. But the exciting part that makes Dent one of the most personal rivals of the Batman is that his alter ego, after his tragic transformation, has made him turn his back on Batman. According to the New 52, Bruce Wayne and Harvey Dent attended the same school and grew up together in Gotham, before Bruce departed for his training period. Now #1021 has cemented the fact that Dent knew that Bruce Wayne is The Batman.

Issue #1021 and the current storyline 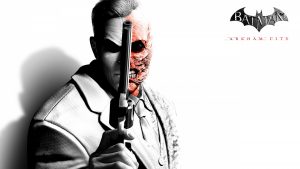 The current DC storyline has established Two Place as a primary character who is struggling between his two identities. One side idolizes Harvey, who wants to erase all the criminal activities from Gotham. However, the other is inspired by the notorious Two-Face, who is willing to create chaos and destruction throughout the city. Fortunately, Dent has this side under control, but as he knows the identity of the Bat, it is always a risk with Two-Face inside him.

Is it the end for Batman anonymity? 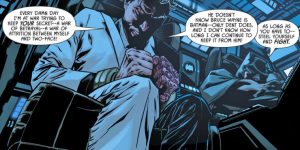 Dent confronts Wayne in front of the Batcave and asks him that if his assumption of him being the Batman is correct. He gets the confirmation and is relieved to know that he has seen Wayne grow under the cape. However, he also makes the shocking revelation about his dual identity, and while both stands against the Two-Face’s assembled cult, it seems blood is on the line. However, Harvey is aware of Wayne being Batman while Two-Face is not. However, when Two-face takes over Dent’s body, he is shocked to find himself inside the Batmobile. With Dent knowing about Batman’s identity, it makes Two-Face even deadlier.

Throughout the comics, the struggle of Dent trying to suppress his alter ego is shown in a very elaborate manner. However, both Two-Face and Dent can go into the memory of each other without the other half knowing. So, Batman’s identity is under crisis, and Two-face can access Dent’s memory anytime. This gripping storyline continues in issue #1021.

Here;s the trailer of the first film which featured Harvey Dent in it: