The caped crusader known to the criminal underworld as the Batman will finally be making his television debut on FOX’s Gotham series finale. As much as fans are excited to see him make his return to the small screen, other DC branded television series such as Batwoman has to make do without the Batman character and rely on new ideas.

To say that Batman is one of the most iconic superheroes off all time is an understatement. He’s arguably the number one superhero that ever existed. That being said, his presence looms in the background of any DC property that has characters related to or that have been known to cross paths with the dark knight in the past. Unfortunately for DC television shows like Batwoman or Titans, the references to Batman have been limited at best, but the series writers have found creative ways to get around their bat problem.

Batwoman explores the world after Gotham’s dark knight has disappeared 3 years prior and a new hero played by Ruby Rose rises to pick up where the Batman has left off. Batwoman‘s executive producer Sarah Schechter talked to The Wrap about the benefit of not using the Batman character to help develop Ruby Rose’s Kate Kane, a cousin of the missing Bruce Wayne.

“It’s a post-Batman Gotham City. What is it like after these heroes leave? What’s great about the restriction of just focusing on Batwoman is that we have to build a world for our character. Part of not using the crutch of Batman is making sure we’re establishing this really complicated world for her to live in.”

DC’s Titans takes a different approach, focusing on a retired Bruce Wayne no longer sporting his signature cape and cowl, but supporting the Dick Grayson and his team achieve success.

Armed with a passion for social justice and a flair for speaking her mind, Kate Kane soars onto the streets of Gotham as Batwoman, an out lesbian and highly trained street fighter primed to snuff out the failing city’s criminal resurgence.

Here is how Ruby Rose reacted when asked about how she feels about being casted as Batwoman in the latest CW series on The Tonight Show Starring Jimmy Fallon: 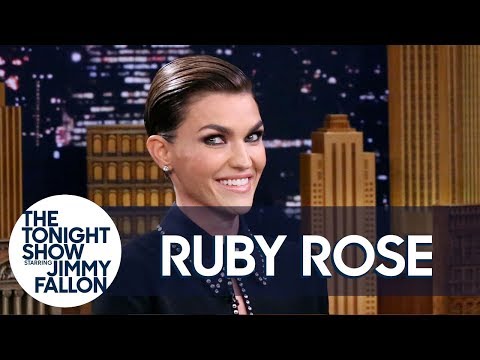