Batwoman’s panel revealed a piece of big news at the San Diego Comic-Con and fans were hit with a surprise. Fans will get to see a character make his debut on Batwoman. Batwoman’s episode, “Down Down Down,” will introduce Season 1 villain: Tommy “Hush” Elliot. Showrunner Caroline Dries has called Tommy the “perfect villain.” 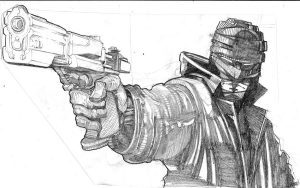 In comics, Tommy Elliot/Hush first appeared in Batman #609. Elliot and Bruce Wayne were childhood friends. Like Bruce, Tommy was part of a wealthy Gotham family, but unlike Bruce, Tommy’s was not a happy one. His father was abusive, and his mother, who came from a poor background, was submissive. Young Tommy attempted to kill his parents, desiring his wealth and independence. While Tommy killed his father, his mother was saved in an emergency surgery performed by Bruce’s father, Dr Thomas Wayne.

Tommy’s resentment for Bruce took new depth as Bruce inherited his family’s fortune after his parents were murdered. Tommy became involved with a woman his mother didn’t like, and she subsequently cut Tommy off from the family fortune. So Tommy planned to murder his mother. His girlfriend killed the lawyer and destroyed the will ensuring that Tommy ended up with the family fortune. He offered money to Edward Nygma/Riddler to kill Bruce. Ultimately he became Hush, combining forces with Riddler to bring Bruce/Batman down.

Tommy Elliot won’t appear as a physician as he is in comics. Tommy is an old friend of Kate’s cousin. Although he’s been a huge Batman villain historically, “Hush” is being adapted as the new Batwoman villain. Tommy Elliot will be introduced as one of Gotham’s richest men, and he’ll be throwing a party, and that’s where he’ll see Kate. Tommy’s return to Gotham will add a new dynamic to the series.

Batwoman showrunner Caroline Dries says that “Tommy Elliot is the perfect villain for Episode Three because if you saw on the pilot, Kate puts on the bat suit.”

Dries further added that “She’s going to put it on to scare the sh** out of Alice. Once Gotham is like ‘Batman’s back,’ there are consequences to that. And one of the consequences to having Batman back in Gotham is that all of the Batman villains are going to come back and try to kill him, and Tommy Elliot has a chip on his shoulder, as we’ll learn, for Bruce Wayne and Batman, so he comes back with a very heightened agenda.”

Batwoman airs every Sunday at 8/7c on The CW.