“Its powerful legacy is an important part of our network’s DNA – bold stories not told anywhere else and bigger-than-life-characters -and we’re honored to bring back the beloved original cast members for 90210.”

Most of the core cast of 1990s teen series Beverly Hills, 90210 are coming back to Fox for a new limited series — except it’s not quite what you expect.

The group will star in a six-episode series titled 90210 to air this summer on Fox.

Absent from the cast list are Luke Perry (who is currently on The CW’s Riverdale) and Shannen Doherty. But we hear “the door is open” and they could still get added as this lineup isn’t final.

“The core cast will all play heightened versions of themselves in a brand-new serialized drama — with a healthy dose of irreverence – that is inspired by their real lives and relationships. Having gone their separate ways since the original series ended 19 years ago, Jason, Jennie, Ian, Gabrielle, Brian and Tori reunite when one of them suggests it’s time to get a Beverly Hills, 90210 reboot up and running. But getting it going may make for an even more delicious soap than the reboot itself. What will happen when first loves, old romances, friends and frenemies come back together, as this iconic cast — whom the whole world watched grow up together — attempts to continue from where they left off?”

A group of friends living in Beverly Hills, California make their way through life from their school days into adulthood.

Beverly Hills, 90210 is an American teen drama television series created by Darren Star and produced by Aaron Spelling under his production company Spelling Television. The series ran for ten seasons on Fox—originally airing from October 4, 1990 to May 17, 2000.

It is the first of five television series in the Beverly Hills, 90210 franchise and follows the lives of a group of friends living in the upscale and star-studded community of Beverly Hills, California as they transition from high school to college and into the adult world. The “90210” in the title refers to one of the city’s five ZIP codes.

The initial premise of the show was based on the adjustment and culture shock that twins Brandon (Jason Priestley) and Brenda Walsh (Shannen Doherty) experienced when they and their parents, Jim (James Eckhouse) and Cindy (Carol Potter) moved from Minneapolis, Minnesota to Beverly Hills. In addition to chronicling the characters’ friendships and romantic relationships, the show addressed numerous of topical issues such as sex, date rape, homophobia, animal rights, alcoholism, drug abuse, domestic violence, eating disorders, antisemitism, racism, teenage suicide, teenage pregnancy, and AIDS. 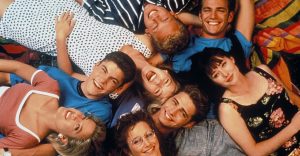