DCEU is back in the headlines! This time with the BTS (Behind the Scene) photos from their upcoming release, Blue Beetle. 2022 was expected to be a good year for DC. With the much anticipated Matt Reeve’s Batman and the sequel to Shazam (2018) lined up among other movies of the media franchise. 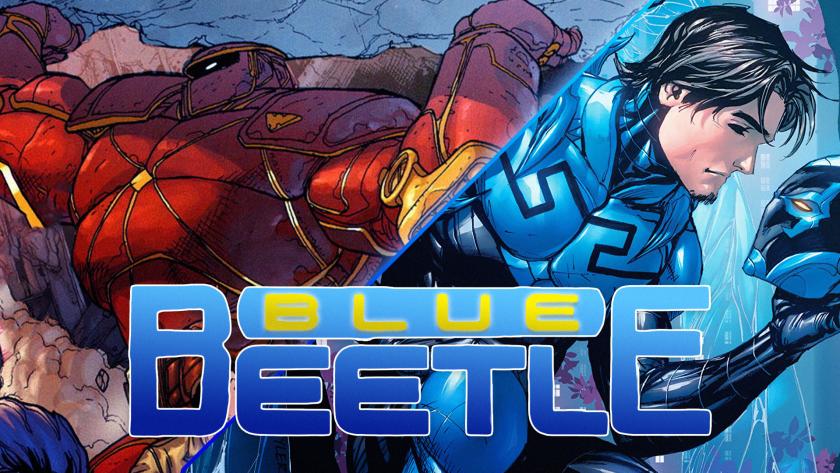 Unexpectedly though, another introduction into the live-action sphere from the DC comics had drawn great attention recently. Blue Beetle, a DC Comics character is set to be adapted onto the screens. With Xolo Maridueña of Cobra Kai fame playing the titular character. The actor was recently spotted shooting for the movie, in a superhero costume, which had fans expressing their amusement at its accuracy.

With the movie’s production nearing an end on the film, star Bruna Marquezine took to her Instagram (via Reddit account DCEU Leaks) to share a new Blue Beetle BTS set photo. The image gives the best look yet at the DCEU hero’s costume, with Maridueña attached to wires in his super suit. This upload came about, after a few months of the initial leaks. Although DC or Warner Brothers are yet to officially release any stills from the shoot. Maridueña took to his own Instagram the day they leaked thanking fans for the outpour of love regarding his look in the comics-accurate suit.

This comes as a major plus, for the media franchise; given their counterpart, Marvel, has been criticized for its oversaturated suits and bland colors. Largely varying in comic accuracy from character to character and the aforementioned flaws, Marvel has been at the receiving end of innumerable negative criticism lately. The new BTS image is sure to add to Marvel’s worries. On the other hand, for DC fans expectations are high from the release. With people appreciating the (now uncommon) practical approach to adapting the superhero suit.

When will the movie be released?

The movie is set for a theatrical release on August 18, 2022. With the hype around the upcoming movie building. Warner Bros is still tight-lipped over any official releases from the movie. With the movie nearing the end of its production, it seems likely Warner Bros. will begin offering proper looks at the DCEU hero and the rest of the cast shortly.

Additionally, with The San Diego Comic-Con kicking off later this week, the studio may be bringing footage of the new film to its Hall H panel.

‘All That Damn Money And Not An Ounce Of Creativity’: Fans Blast Kim Kardashian For…

‘Good To See The Band Back Together’: 50 Cent, Floyd Mayweather End Legendary Rivalry As…

‘She Stopped Paying Bills, Now They Hate Her’: Fans Console Britney Spears, Crucify Her Family After They Turn Against Her as She Rises Back to Fame

‘All That Damn Money And Not An Ounce Of Creativity’: Fans Blast Kim Kardashian For Extravagantly Spending On Luxury SKKN Office Instead Of Correcting Abysmal Packaging

Disgraced Rapper Kodak Black Demands His Car And $75k In Cash Seized From Him During Drug Bust, Threatens To Sue Racist Cops

‘Good To See The Band Back Together’: 50 Cent, Floyd Mayweather End Legendary Rivalry As Internet Finally Breathes Sigh Of Relief