Everybody knows about Captain America, you don’t have to be a diehard Marvel fan to know his name. He is one of the most popular superhero in the superhero world. Fans love him for his patriotism and his awesome personality. He seems like a pretty decent guy with a good some serious work ethics. But when it comes to memes, just like his fellow superhero friends he also have his fair share of memes created by fans.

And not just the live-action Captain America, the comic one is pretty memeable too. People love to make funny memes and jokes about him. Captain America is a character that was created by cartoonists Joe Simon and Jack Kirby. It’s a story about a young boy named Steve Rogers, whose powers were experimentally enhanced by a substance called “super-soldier serum”. After the World War II, our soldier gets trapped in the ice and survives it until he got back to normal in the new modern times. He is still getting used to the modern world and sometimes it can be a lot. But he is a highly respected member of his community and the leader of the Avengers.

The comic book Captain America provides a lot of funny moments and expressions to make memes for the fans. So here we have gathered a few comic Captain America memes that are funnier now due to the recent series “The Falcon and the Winter Soldier”.

1. JUST A SOME STRAIGHT TALK!! 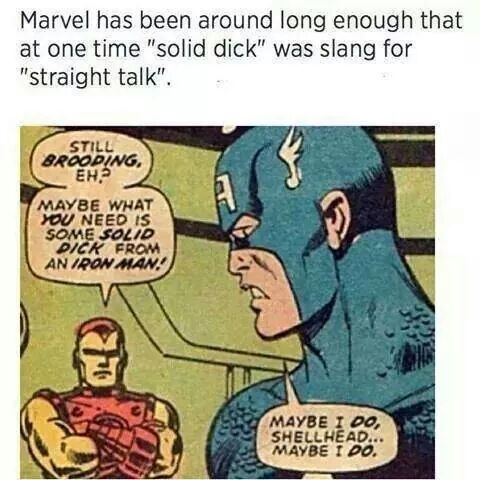 Captain America comics first ever appeared in 1941, so you know that the common slangs and the dialogues of those years are way too outdated for the this generation. Many vintage Marvel comics have these types of funny deliveries, which make no sense now or means absolutely different out of context but before it was just a normal thing to say. The meme shows that the speech bubble says “solid dick” and we know how it looks, but do not worry it’s not what you think. This is an expression which was used at that time and means “Solid Advice”. In the meme Iron-Man is saying that Captain needs “some solid” advice from him. 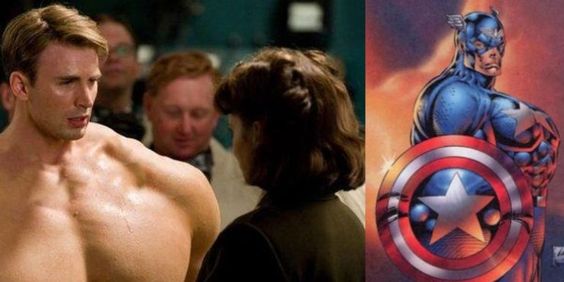 Rob Liefeld is known for his creations like Deadpool and Cable. Fans know that he loves drawing his heroes super buff and bulky. With long legs, veiny chests and massive biceps, his heroes are very easy to notice and sometimes very fun to joke about. Chris Evans really tried his best in the live-action movie to look his best and represent the super bulky comic hero. But if you imagine a person with the same  physical traits like Captain America from the comics, it would be hilarious and abnormal. 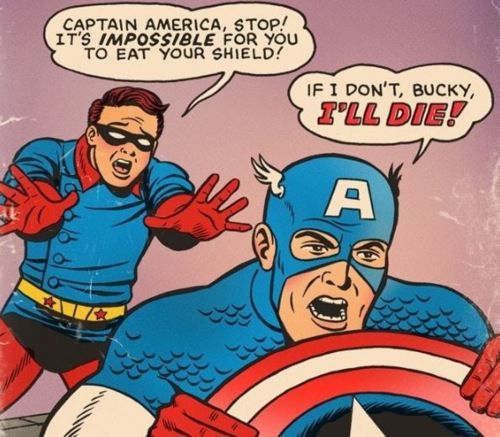 Sorry to ruin the fun guys, but this is not a real cover by Marvel and it is a fan art by Kerry Callen. He got inspired by the style of DC’s covers for their comics as they mostly show the characters doing or saying something outrageous. While the Marvel covers generally contain the characters fighting or in a tense situation. So Kerry thought it might be cool to draw Marvel characters in DC’s cover style. And not gonna lie it looks pretty awesome. Don’t you think so? 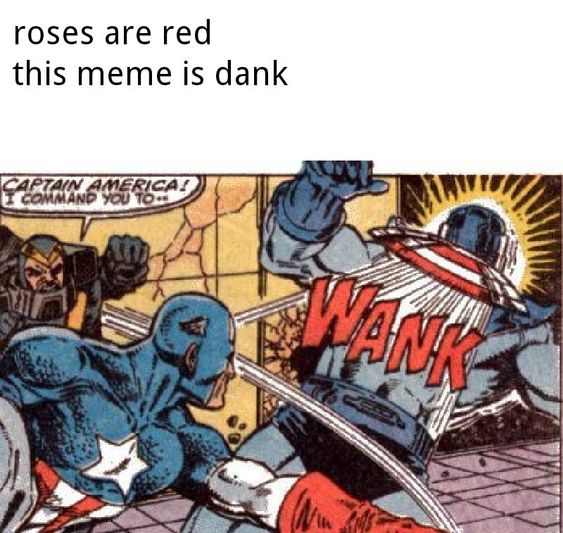 “Acts of Vengeance” is an awesome crossover that took place in Captain America #366. In this, all the heroes fought with different villains then usual. All the villains and superheroes shuffled their opponents and it was very fun to read for the comic lovers. In the comic, Captain America fought the Controller, whose superpower is that he can control anyone with his voice. During the battle, Controller tries to command Captain America, Cap smacks him with his shield and the sound effect is shown as “WANK”. 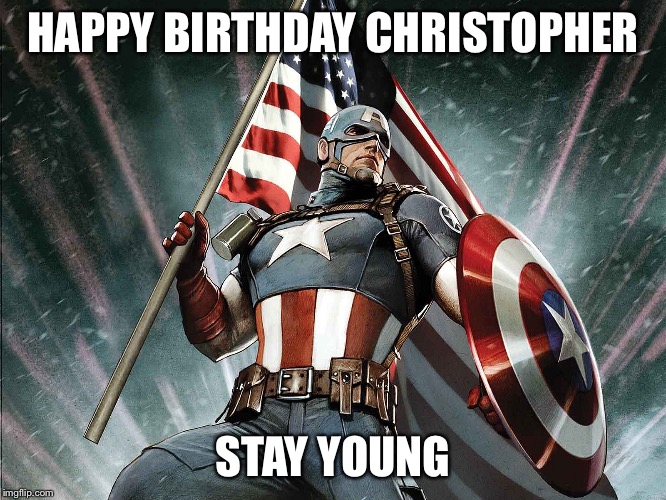 This meme is just a Happy Birthday wish for a random person named “Christopher”. At a first glance it looks like a normal image but the bottom phrase “STAY YOUNG” is what makes it funny. It is a slight hint by the Cap himself, that how he survived the ice and now he is young forever and he is wishing the same for Christopher. Which is as we know, is not possible. 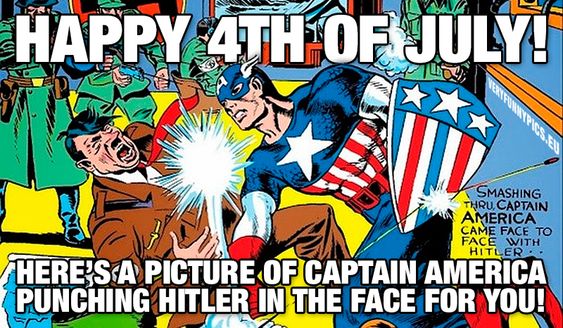 This is the cover for the debut comic for the Captain America. It’s a very iconic cover as the character of Captain America represents the hope for the Allied soldiers to win against the Nazis under the Leadership of Hitler. The famous cover shows Captain America punching Hitler and representing the defeat of evil.

7. HE HAS DONE HIS RESEARCH FOR THE ROLE!! 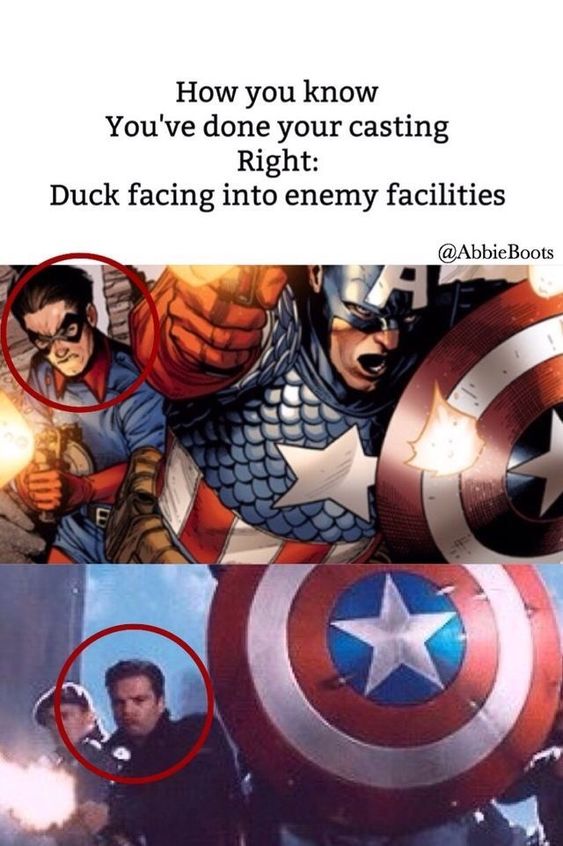 In the comic version, Bucky can be seen with a “duck face” and Sebastian has done a great job imitating that. We don’t know if it was intentional or it just happened, but it made the fans happy and everyone enjoyed it. The sassy expressions on both the comic Bucky and live-action Bucky face makes this meme quite hilarious. 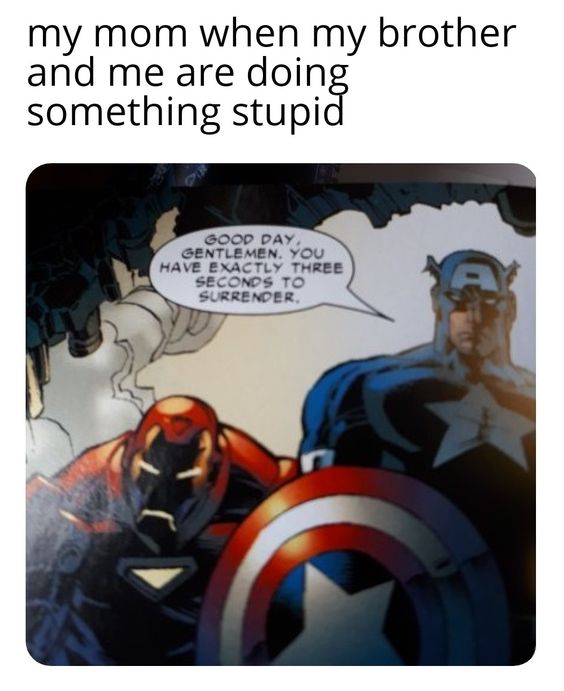 This scene is from the Amazing Spider-Man #523. Fans know that Captain America is the mature responsible adult of the group. He ties the Avengers together and keep them disciplined. He can be a great fit for being a parent as he is a guy with some great morals, and he knows how to make people follow his orders. 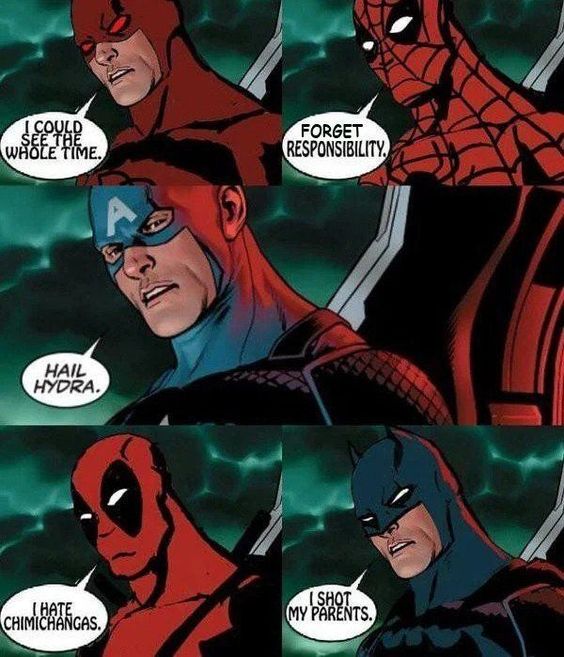 In this meme, the superheroes are shown saying things that they won’t say generally, like Batman saying he killed his parents or Deadpool saying he hates Chimichangas. The meme started as Captain was showed saying “HAIL HYDRA” but don’t worry guys, Cap is not switching sides. Captain lost his memory and got turned into an agent for HYDRA. This is from the 2017 limited series “Secret Empire”. 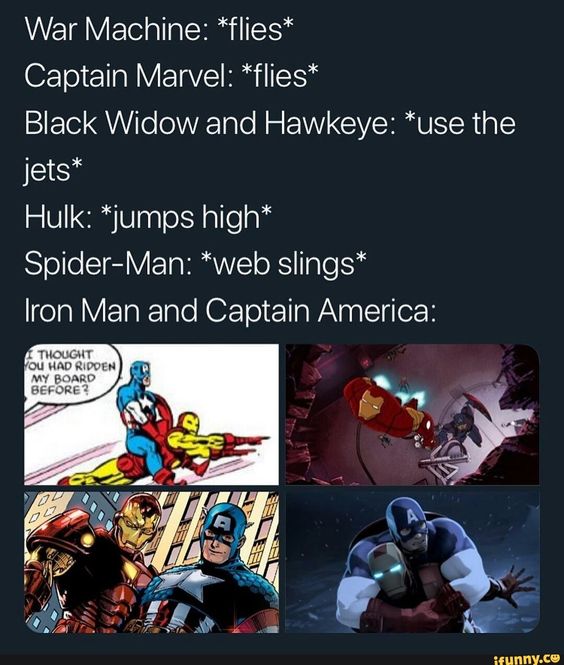 In several comics, Captain can be seen clinging to Iron-Man for free rides to long distances as he do not have the ability to fly like his other teammates. So he gotta use what he got. Him riding on Iron-Man’s back like a little kid is a pretty wholesome scene. Fans loves when it happens and it’s beneficial as they both make a strong duo.

Captain America from the comics is always gonna be an iconic character and one of the most respected in the superhero club. He is a fan favorite and many young ones look up to him and he is a great role model for all. What do you guys think about these memes? Let us know in the comments about your favorite Captain America meme.