Captain Marvel is one of the strongest Avengers; so much that she is one of the few characters who can lift Thor’s hammer Mjolnir without being worthy.
Thor’s hammer has perplexed the Marvel faithful for decades; and exactly how it determines who is worthy and who is not to wield the weapon is not defined.
However, in Captain Marvel vol. 10 #16, Carol Danvers is clearly not worthy of Mjolnir and yet she is able to lift it.

At the end of The Last Avenger story arc, the villain Vox Supreme has forced Carol to do his bidding aka murder the Avengers using her dark costume.
But Vox Supreme is not aware that Carol has hidden the alive Avengers inside a pocket dimension called “Singularity” away from Vox Supreme and presented him with the clones of Avengers instead.
Carol then plans to confront Vox while the Avengers rescue Kree hostages whom Vox has outfitted with remote controlled bomb.
Captain America gives her his shield too.

When she confronts Vox, Carol is imprisoned and hooked up to a machine that will grant her the power of ALL Avengers and controlled by Vox.
She escapes ; however is doused in the DNA of the clones which grant her a larger and misshapen form.
As she reaches out her hand amidst all this, Thor’s hammer flies to her hand. She has advantage over Vox Supreme and using Mjolnir she seals Vox in the same machine which was meant for her. 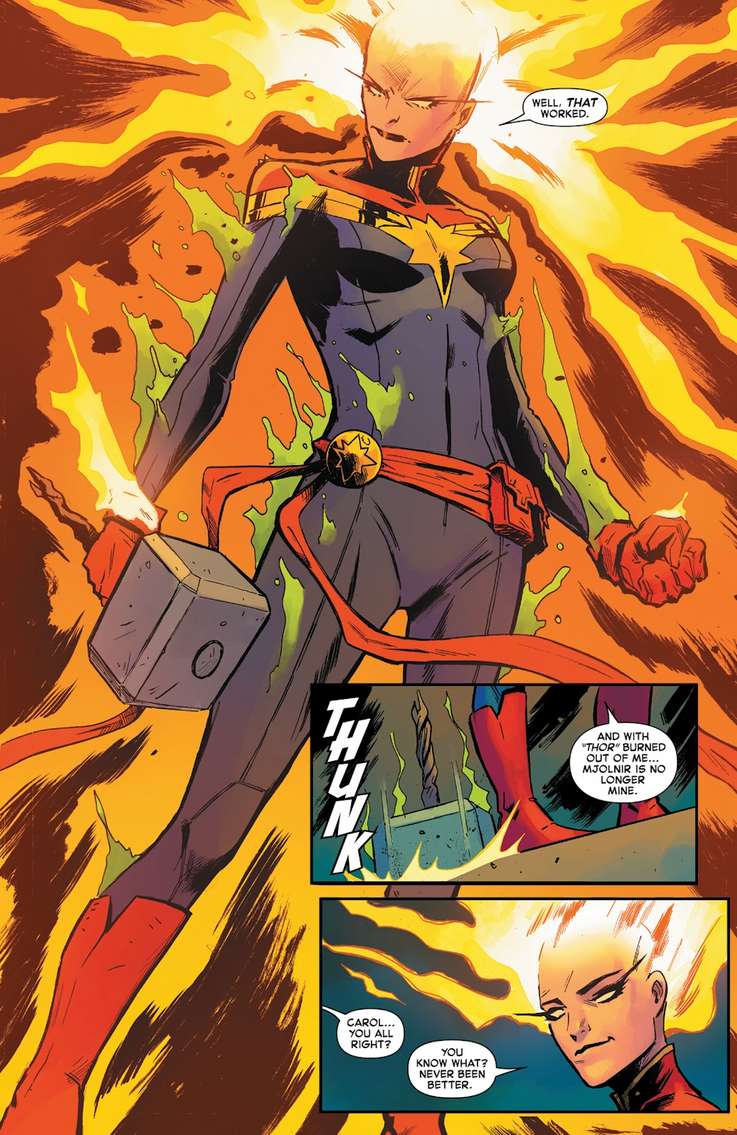 After the fight ends, Carol realises that she temporarily carried Thor’s DNA and was able to summon and wield Mjolnir (and when she burns out the poisons, Mjolnir no longer recognizes her)
This is one of the rare instances in comics where the hammer was “tricked”.

Not many characters can fulfill the “worthiness” requirement; Odin, Captain America and Superman (in the DC/ Marvel crossover) can all lift Mjolnir without resorting to any kind of trickery, but Carol Danvers would have to rely on a trick to lift the hammer.

And of course, Captain Marvel with the amount of strength and power she possesses, she doesn’t truly need Mjolnir to function as a member of Avengers.