Cardi B who is the winner of many musical awards is the most successful female rapper in the industry. Well, Cardi just lands her first acting role and its in none other than Fast & Furious franchise. Vin Diesel and Cardi B are teaming up together for Fast & Furious 9 and we couldn’t ask for a more dynamic duo.

Recently Vin Diesel dropped a Vlog post from the sets of Fast & Furious 9. The only thing that came as a surprise to the fans is the appearance of the special guest. You might as well ask who the special guest is? Well, it is none other than Cardi B. 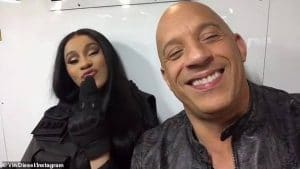 Vin Diesel seems to be rolling with exhaustion from the entire day’s shoot is seen alongside Cardi B.

Cardi B says, “I’m tired, but I can’t wait. I ain’t gonna front, I think this is going to be the best one. I need to take a nappy-nap. I’m ready to take my nappy-nap.” Vin Diesel is seemingly enjoying Cardi’s signature speech and Dr. Suess-like vocabulary. Apparently it is Day 86 of the F&F 9 shoot. Diesel joins in to confess, “I know I’m exhausted. We all literally gave every single thing we could for this movie – put it all on the table, put it all out there.”

Check out the video uploaded on Twitter by Vin Diesel: