The upcoming Tim Burton and Netflix series, Wednesday, a spinoff from the Addams Family, casts Catherine Zeta-Jones as Morticia. 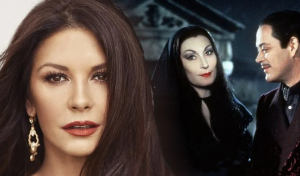 Tim Burton and Netflix’s upcoming series Wednesday is a spinoff from the Addams Family. It seems like the markers have finally got a cast to play Morticia in the series.

As per an article by Variety, Catherine Zeta-Jones is now going to play Morticia in Netflix’s Wednesday. The character will be the matriarch of the Addams Family. She will be joined by Jenna Ortega as the eponymous Wednesday and Luis Guzma as Gomez.

In an interview, the Netflix director said that: “When we first heard Al Gough and Miles Millar’s pitch for Wednesday we were struck, like an arrow from a crossbow, right in our hearts. They nailed the tone, the spirit, and the characters, but gave us a fresh way into this story.” She also added: “Naturally infused mystery charting Wednesday’s years as a student at the peculiar Nevermore Academy. Wednesday’s attempts to master her emerging psychic ability, thwart a monstrous killing spree that has terrorized the local town, and solve the supernatural mystery that embroiled her parents 25 years ago – all while navigating her new and very tangled relationships with the strange and diverse student body.”

The Addams Family franchise was first created by Charles Addams in 1938. It has been featured on both the small and big screens and in both live action and animation formats. However, Burton’s take on the kooky and creepy family was announced in October last year. And since then, it has stayed in every gossip and conversation that he will be producing the series along with Smallville creators Miles Millar and Alfred Gough.

With that said, the upcoming Tim Burton and Netflix’s series Wednesday is yet to receive a date for its premiere on the streaming platform.