It has been an age-old debate among pet owners about who makes a better pet. Some argue that dogs are superior to cats for their loyalty and unconditional love, while others argue that cats are better for being low-maintenance and having their own personal space.

However, cat lovers have won this round as Indonesian illustrator and concept artist Fajareka Setiawan has re-imagined the cuddly furballs into some popular Marvel heroes. Dubbed as the Catvengers, these supurr-heroes will definitely save the world and also melt your hearts. 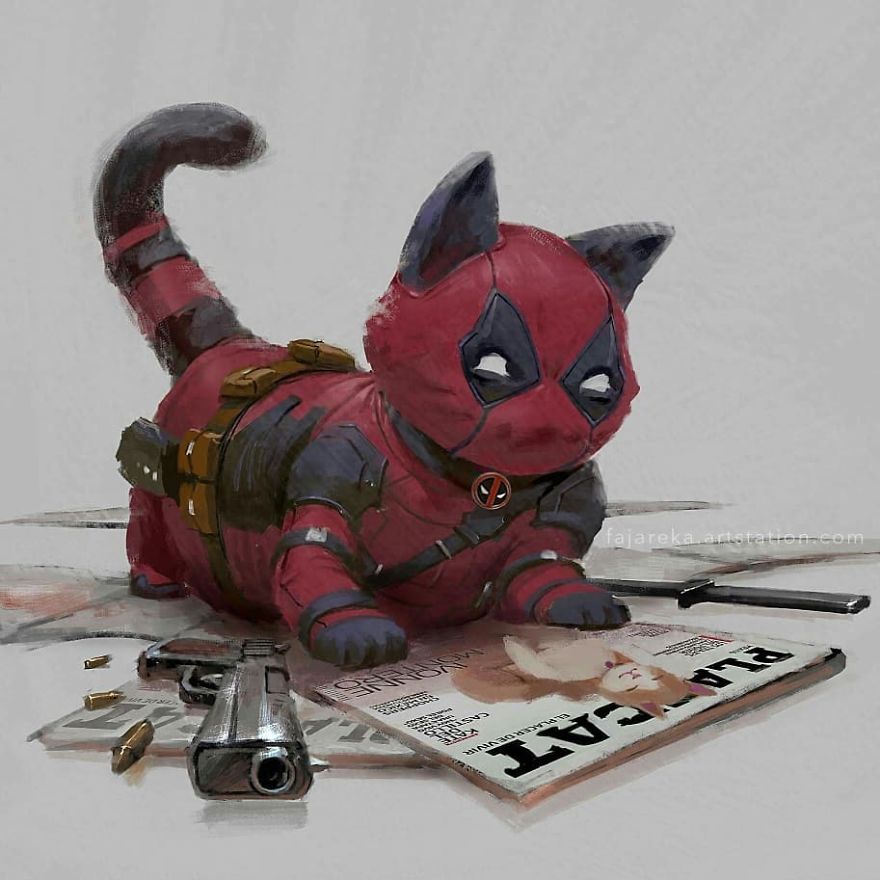 Hate him or love him, it’s hard to ignore Deadpool aka The Merc With a Mouth. While the trash-talking and fourth wall breaking mercenary with unbelievable regenerative powers is ruling the box-office, artist Fajareka Setiawan has re-imagined the beloved superhero as a furry goofball. Dressed in Deadpool’s iconic costume, Catpool is here to take lives with its cuteness. Lying with a gun and a katana, Catpool is reimagined pretty much like its comic-book counterpart. Intently gazing at a Playcat

magazine, Catpool has already posed to draw it like one of them french…cats? 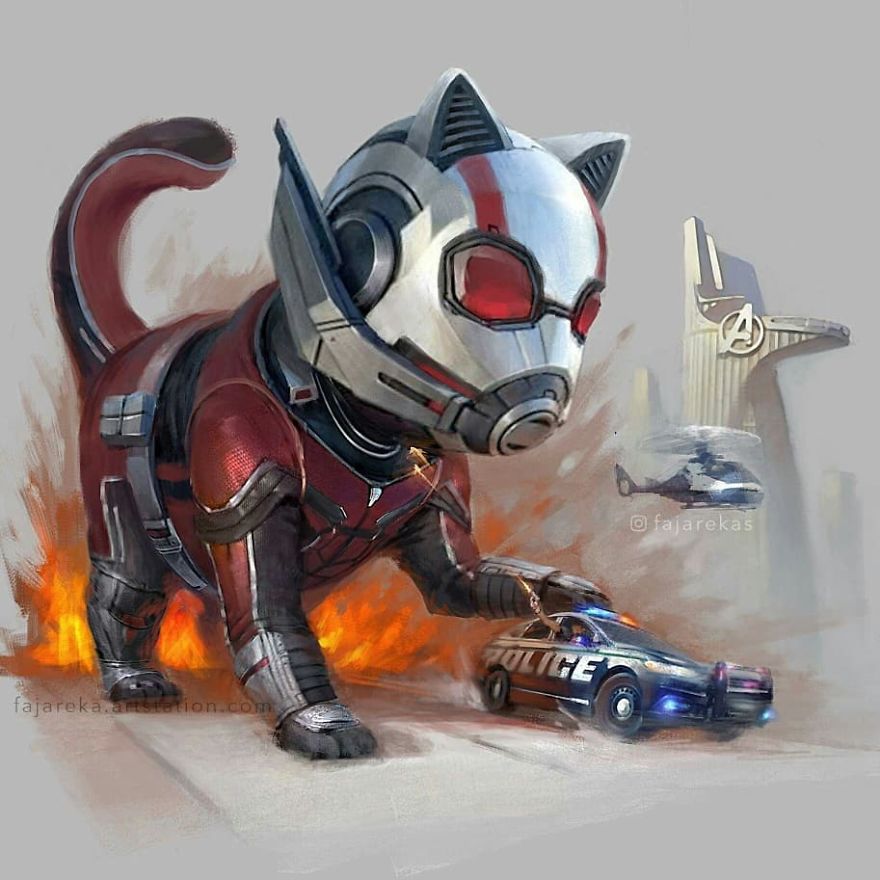 There’s a possibility that your pet housecat will promptly consider you as food if it increases in size. Though we never wish to witness that possibility coming to life, Fajareka Setiawan’s Ant-Cat is one alternative we would love to see. Based on the superhero Ant-Man, Ant-Cat seems to be on a rampage in its gigantic form. Playful by nature, Ant-Cat seems to be having the time of its life by chasing police cars and helicopters near the Avengers tower. In the movie, Scott Lang claimed that orange slices helped him recuperate after his Giant-Man transformation. We wonder what Ant-Cat 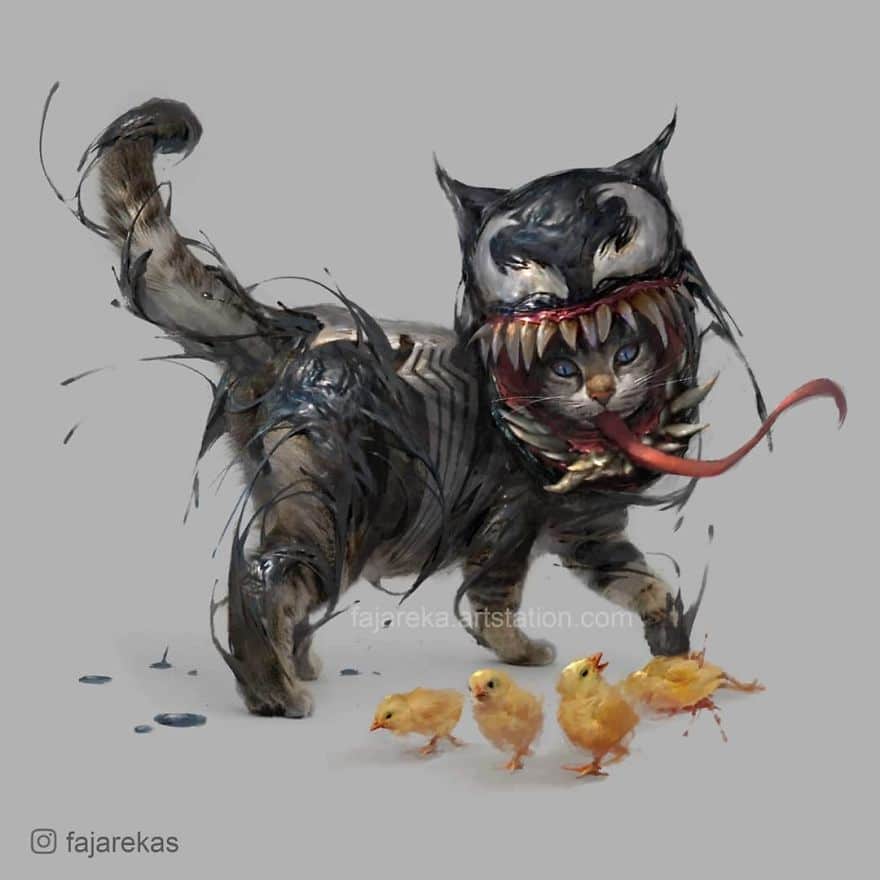 As if cats were not temperamental enough, Fajareka Setiawan’s illustration of Venom Cat further reaffirmed the fact. Bonded with the Venom symbiote, the Venom Cat marches on purrr-iously for lack of chimkens. Armed with a dangerously long tongue, the Venom Cat’s piercing blue eyes gaze deep into your soul before taking your life. In his hunt for chimkens, a chick gets crushed under the Venom Cat’s paws while the remaining three run for their lives. Well, we found the purr-fect pet for Tom Hardy. 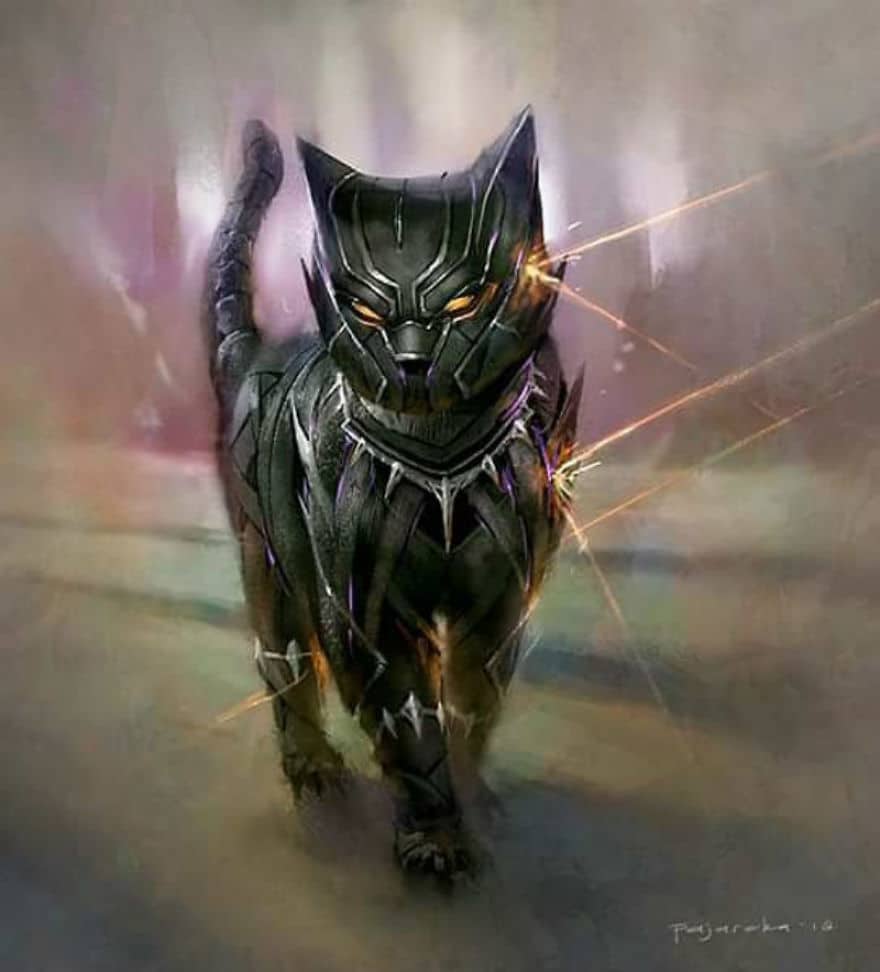 The one true king of Paw-kanda, Black Pawwnther is here to rule our hearts. But wait a minute, aren’t panthers a member of the cat family too?