Another child of Batman has showed up in DC and it’s with Catwoman! But this isn’t just it and there’s more to reveal here as the future of Batman’s children continues being a haze of confusion, alternate timelines and nightmare scenarios.

One of these sons happen to be Aion, who is the biological son of Bruce Wayne and Selina Kyle. This came out through Damian Wayne, who’s the current heir to Batman who had a look at his half brother and another possible heir to the throne. This just made the prelude to the Batman and Catwoman wedding even more interesting.
To be vivid, both Batman and Catwoman don’t have a son in the current DC comics timeline, but with their marriage fast approaching and Bruce Wayne approaching towards a life where he’ll give up fighting crime, a child could be a possibility in the future. But in the Prelude to the wedding comic, Damian Wayne learns that Batman and Catwoman do have a child and he’s really annoying as well. 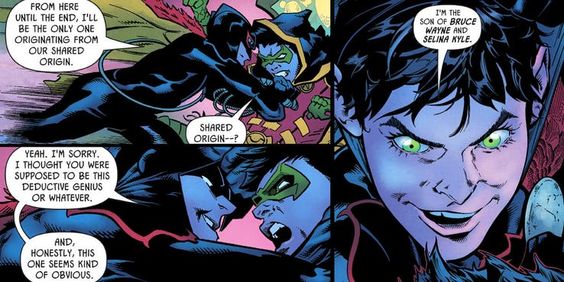 After getting a hint on Damian, Aion prepares himself to score an all new high score in his favourite arcade game, Aion announces himself with a cat emblem stitched on the back and a bat cowl to announce his lineage. He even impresses everyone with his fighting skills, giving Damian a hard time even when he wasn’t prepared.
Damian is only able to have an upper hand in the fight when he realises that it’s all in his head and the heavy hallucinations are playing a game on him. But well, that’s not how it is actually. The battle is defined as a ruse by Ra’as Al Ghul who has come to the town for Batman’s wedding. The name Aion, was a term used to Carl Jung to define notions of SELF, created by Damian inside his head. 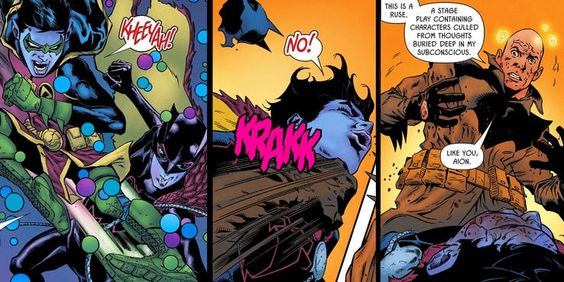 Or maybe it’s what he’s thinking. The future of Bruce and Seline’s son isn’t exactly a work of fiction. The hallucinations can be explained by the drug he has been dosed with but this can be taken as the fate of Damian Wayne in the course of Batman #666. And well, this ain’t the first time this is happening with Damian.
Batman #666 has been confusing. We saw Damian become Batman in the future after Bruce’s death in the first part of the story. He even shaves his head and makes a deal with the Devil to sacrifice his soul for Gotham and immortality.
Now they’ve shown Catwoman and Batman’s son to be nothing more than an illusion but it cannot be just a coincidence that the hallucination also shows Damian the anti hero he becomes in the future.
Whatever the case might be, for now Helena Wayne has the company as the child Batman and Catwoman has raised in the comics.