Chewbacca is one of the most iconic characters of all time in the Star Wars’ franchise. He has been a fan favourite, and the role has got a lot of praises from the audience as well as the critics. Since its appearance, Chewbacca has had an unbreakable bond with the franchise and has appeared in a series of tie-in comics, books and video games. If we are to see the previous movie timelines, Chewbacca is now 234 years old and is still happy and healthy. He has a son named Lumpawaroo with his wife, Mallatobuck. 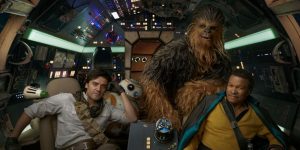 The signature growl of the animal has been one of the fan favourites of the franchise. Han Solo or Rey can only understand the Wookie grunt, howl and trill in the native Shiiwook dialect. But did you know Chewie can converse with humans? Not the character but the one who plays it can speak with his co-stars.

The man behind Chewbacca 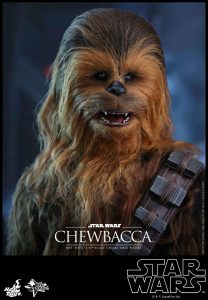 Peter Mayhew, who is the voice behind Chewbacca and who even plays the costumed animal, speaks English. In a recent video which was shared by film critic, Marshall Julius shows the actor shouting at Han Solo in his normal voice. This significant moment was shot during the filming of the Star Wars’ trilogy. Not only does Chewbacca speak English, but he speaks it with a distinctive Yorkshire accent. This was noted when the actor was conversing with his friend and partner in crime. 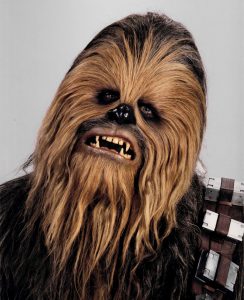 The character of Chewbacca was initially inspired by George Lucas’ dog, an Alaskan malamute named Indiana. Peter Mayhew, who is nearly seven feet tall, got the role of Chewbacca due to his enormous height. The original actor behind the Chewbacca mask passed away last year. Finnish actor Joonas Suotamo initially played it.

After the video, the only thing that lasts in the audiences’ mind is the voice as it will be playing once they see Chewie and Han Solo conversing on screen. Peter Mayhew is an author too and has shared his literary talents as well. He has always stated that he is delighted to be a part of the franchise!

Here is the trailer for Star Wars: rise of Luke Skywalker!