A new set image from Mission: Impossible 7’s director teases the fan base with the train sequence. It was like watching a sheer train wreck. 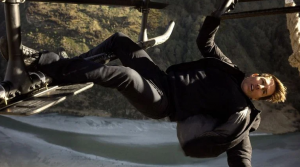 Director Christopher McQuarrie shared a new Instagram photo from the sets of Mission: Impossible 7. Considering the image in the background, fans speculated that the train stunt might result in a dramatic crash. After all, the franchise has never limited itself from intriguing its audience and fans with action-packed sequences.

The franchise, especially Christopher McQuarrie, has always kept Mission Impossible fans involved in their filmmaking process. They do it by sharing pictures and snaps from their sets and locations. However, it was expected that the glimpse of Mission: Impossible 7 will come into focus only after its release. But, shockingly, it proved out to be a wrong assumption when the last train-theme image got revealed. It showed the exterior of the train during a stunt sequel, and the new Instagram image by Christopher McQuarrie was an upside-down selfie inside the train.

A camera is seen to be rigged to the wall in the background. Maybe because it needs to capture the scene of the train rolling off the tracks? Christopher McQuarrie teases the Mission Impossible fans and makes them anxious about what will happen and where the action sequels are headed next.

The franchise has faced too many barriers while shooting for the train crash, including the shutdown due to the global pandemic. But at the same time, the shooting seems to be winding down for some of the casts. Adding to this, Cary Elwes also tweeted that he has already wrapped up on Mission: Impossible 7. 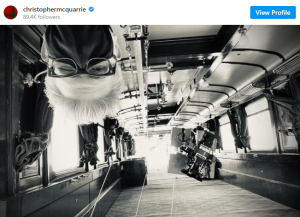