Spoiler warning: This article contains spoilers for Hawkeye on Disney+

The third episode on the new Hawkeye series sees Clint Barton, played by Jeremy Renner and Kate Bishop, played by Hailee Steinfeld being chased by none other than Echo, portrayed by Alaqua Cox. The latest series on Disney+ introduces Echo into the MCU. Not many would know but Echo is a deaf American superheroine, who is the leader of the Tracksuit mafia and is introduced as a villain to Jeremy Renner and Hailee Steinfeld’s archers. A spin-off series based on Echo is already under development by Disney+, with its script being written by Marion Dayre.

Hawkeye is inspired by David Aja and Matt Fraction’s run on the character in 2012. The series takes place almost four years after the events of Endgame as Clint gets ready to take his family for a Christmas vacation to New York – their first vacation together since the blip. However, Kate Bishop draws the attention of some old ‘Ronin’ enemies by donning the same costume, in order to investigate her mother’s suspicious fiancée, Barton takes her under his mentorship, cleaning up her mess to get back to his family in time for Christmas. With the initial two episodes now streaming on Disney+, theories on what’s to follow have started steaming up.

Right before the premiere, Marvel Studios has released a new Hawkeye behind-the-scenes clip that introduces Steinfeld’s Kate Bishop to the Marvel Cinematic Universe. It also features episode 3 of the series where Kate and Clint are being chased by the Tracksuit Mafia and Echo. 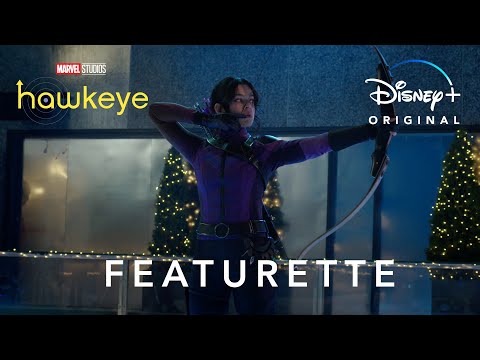 Echo was introduced in Hawkeye (and in the MCU) in episode 2, which marks a rather interesting development for the character’s arc in the upcoming episodes of Hawkeye. In Marvel Comics, Echo aka Maya Lopez was adopted by the Kingpin, after he murdered her father. Kingpin essentially serves as an antagonist to Daredevil, alongside Echo. Lopez can recreate any movement that she’s seen before. Later, she realises the path she is on and turns towards the good side: first as Ronin and later as Echo in New Avengers. Doctor Sleep star Zahn McClarnon will play Echo’s father in Hawkeye which has left us wondering how comic-accurate this version of Echo would be.

There are also some tumors that Vincent D’Onofrio might return as Kingpin in Hawkeye. The character was previously seen in Daredevil and has captured the curiosity of audiences ever since. With the third episode showing Kate and Clint being chased by these ‘bad guys’, it will be interesting to see how the season deals with Echo’s dynamic and the lead-up to her solo series.

The first two Hawkeye episodes are streaming on Disney+ now.