Comic books have not been very popular for being inclusive. But from now and then, we find some amputee comic book superheroes who had to lose their arm or leg. This has not much to do with inclusivity rather than creating a bleak and hopeless premise in the story.

Whenever the writer wants to make the readers feel tensed about the future of the superhero and the story, they tend to create a plot point for the superhero to lose their arm or leg. And since it’s a comic book, this amputated arm or leg can come back or robotic prosthetics are always at their disposal.

Here are few comic book superheroes who lost their limbs at least once in the storyline. 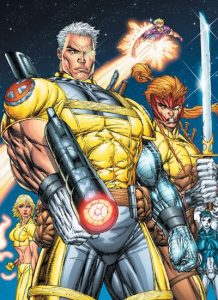 An interesting character in himself, Cable didn’t actually lose his limbs, instead, got transformed. Cable was born as Nathan, son of Scott Summers (Cyclops) and Madelyne Pryor (Jean Grey clone). Apocalypse abducted him in the hope to use him to gain control over the world. But when the mutant villain couldn’t control the child, he infected him with a techno-organic virus.

This virus transforms baby Nathan’s flesh into advanced machinery. Though Scott Summers sends his son into the future to get healed, Nathan returns all grown-up and as a seasoned warrior. Cable reaches adulthood with half his body mechanized due to the virus.

All these events occur in X-Factor #68. 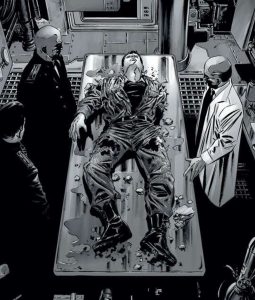 Bucky Barnes aka The Winter Soldier lost his left arm in the events of WWII. It was assumed that Bucky died in the same incident that put Steve Rogers on ice. But the truth was revealed when he came back in 2005 as The Winter Soldier.

It turns out that Bucky Barnes lost his left arm while diffusing a booby-trapped plane heading towards America. He was alive, but the Soviets captured him. They gave him a bio-mechanic arm, brainwashed him, and used him as a personal assassin during Cold War. 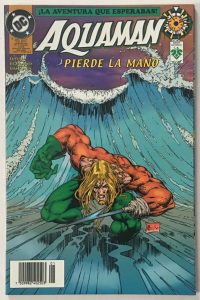 The maximum number of dismemberments has occurred to Aquaman. The first encounter with losing his left arm came when he was fighting villain Charybdis. He held his head underwater so that the piranhas could eat off his head. And along with the villain’s head, they also ate Aquaman’s hand to the bone. The events occur in Aquaman Vol.5 #2 and the superhero replaces his hand with a giant hook.

Until Aquaman Vol. 6 #1 where Lady of the Lake gives him a completely new arm. The superhero keeps his arm until his death and future resurrection where he gains all his extremities.

But this is until in Brightest Day #19 where Black Manta chops his hand. The superhero again goes back to giant hook and keeps it until the end when the whole DC Universe is reset. 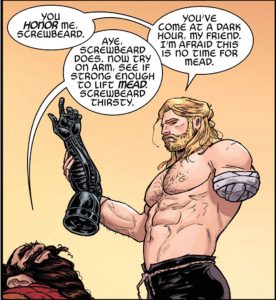 The God of lighting and thunder, Thor has been through a lot in comic books. This also includes his fair share of dismemberments. In one of the several future versions, we see Thor becoming the king of Asgard but he has lost an arm and an eye along the way. We see one of these dismemberments in Thor Vol. 4#1 where he fights Malekith.

Jane Foster replaced Thor as the wielder of Mjolnir. And that’s when he encounters Malekith who can dismember his left arm which is also his next weapon, Jarnbjorn. He does get an Uru prosthetic, however, he never seems to regain his original arm neither the mighty ax Jarnbjorn. 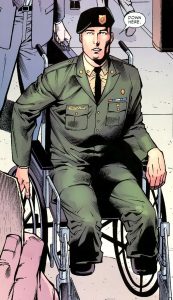 Even before Eugene “Flash” Thompson became Agent Venom, he lost his both legs while saving his fellow countrymen and giving his service to the country. This happens in Amazing Spider-Man #574 where his image as Peter Parker’s bully changes and his journey to becoming a superhero begins.

Agent Venom starts by helping Spider-Man fight crime before a government agency recruits him to experiment with the sedated version of the black symbiote. Thus, Agent Venom is born, and he gets to use his legs and keeps on giving a good fight. 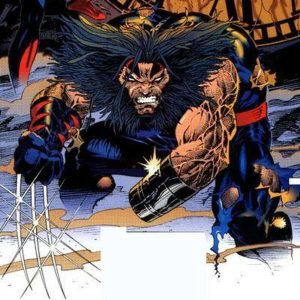 We all know the awesomeness of Wolverine. He has brutal when he fights and thus, he loses a lot of body parts and most of his flesh. But his healing abilities always help him get back every inch of his damaged body.

But an alternate reality in Age of Apocalypse shows a completely different picture. Factor X#3 reveals that the alternate reality has wiped out Charles Xavier. This has worsened the whole reality. The comic book shows that Scott Summers is the right-hand man of the mutant dictator. He fights with Wolverine and loses his eye. But he also blasts away the left arm of Wolverine. And it is so bad that it never grows back.

But Wolverine is still able to release his claws from the stump. The story takes a major turn where he ends up becoming the successor of the dictator. But that’s a story for a different time. 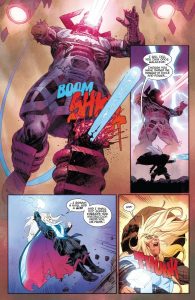 When readers found out about the dismemberment of Galactus in Thor Vol. 6#1, they were utterly shocked. The actual dismemberment was never shown on-page. However, knowing that Galactus is one of the few powerful icons in the comic book, is certainly shocking.

Galactus lost his harm to cosmic frostbite due to Black Winter- a dangerous storm that can wipe the enter existence. This dismemberment left Galactus super weak. So much so, that Thor was able to defeat him easily in the future storyline. But since then, Thor and Galactus have made peace with each other and tackle the Black Winter together.

Do you know any more such unexpected superhero dismemberment in the comic books that surprised you? Comment them below!