After spending a year in space trying to find answers regarding Krypton’s death, Supergirl is back on earth with her loyal companion, Krypto. But danger still looms ahead in the form of Leviathan who attacks her. Luckily she has a new suit upgrade to ward him off.

A Dead Mother And More Awaits Supergirl Back On Earth

Kara Danvers Zor-El came back home to National City, hoping to go back to her regular life with her loving parents. But all is not well as she comes home to find her adoptive mother Eliza Danvers dead. She then gets attacked by masked agents of Leviathan but luckily she has her dad Jeremiah Danvers to help her out. But she is still in the dark regarding the situation with Leviathan, her mother’s death, why groups like A.R.G.U.S are being taken off board and more.

There’s a lot she doesn’t know and Jeremiah offers to tell her as much as he can make of the situation. But before he can do that they get attacked by a woman who is clearly from Leviathan. She wants Supergirl but before getting to her she has to get through her father. Jeremiah matches her move-for-move and finds out that it is his wife and Kara’s mother, Eliza! But there’s no time for questions. Leviathan corners Supergirl and uses Kryptonite to incapacitate her (and her dog). Then he tries to recruit her, just like he tried with Superman. Kara vehemently disagrees with his way of doing things and says that she will never join him.

A New Suit And A New Hope To Fight Off Leviathan 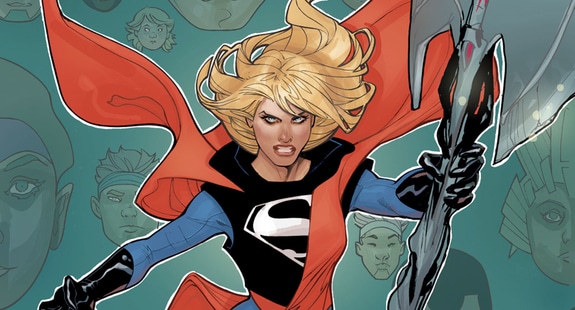 After standing up to Leviathan, Supergirl gets up and her new stealth suit materializes. We have seen her wear this suit during her recent space adventure, but this time we got to know more about it. One is that it now has a full helmet/face mask and can somewhat block kryptonite radiation.

Leviathan isn’t here to fight. So he escapes with the woman, leaving the father-daughter duo more confused than ever before. As for the suit, it certainly comes at a great time as well, just when Supergirl in the CW tv show is getting her new suit with a pants upgrade. All of it certainly falls in line with her suit evolution throughout the decades. The new stealth suit looks cool and we certainly hope that Supergirl uses it again to fight off Leviathan. This time, for good.

To know more about Supergirl’s space adventure and the new suit, check out the video below: