Ultron was game-changing for Avengers in the MCU. Not only did his death and life result in the existence of Vision but they also lead to the controversial Sokovia Accords, the splitting up of Avengers and the arrival of Thanos on Earth.

But what if Ultron is still alive? Well, this is what one fan suggests who states in his theory that Ultron realised that Thanos was coming and used this to his own advantage. This theory was posted on Reddit by EmperorJoker who says that Ultron could have survived in a couple of ways: one by jumping into a body or drone that couldn’t be seen in the film and two, he’s still living inside Vision. Here’s the full theory: 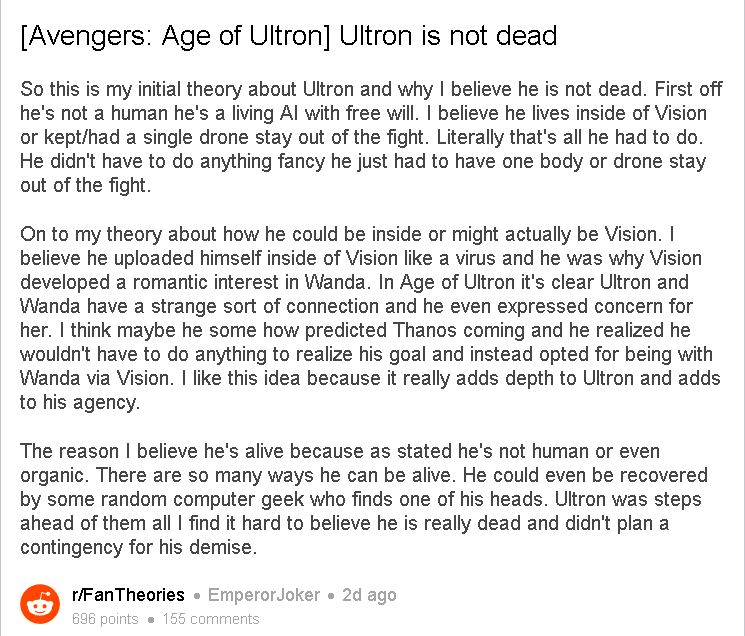 As you may notice, the theory says, “there are so many ways” that Ultron could be alive. While the idea of him jumping into a drone or body seems too far-fetched and absurd, given that Vision ended him using an energy beam from his is Stone, the idea of Ultron living inside Vision is actually interesting. It’s often stated that Vision is half Ultron, as he himself admits that he’s a mixture of JARVIS and Ultron. However, the idea of Ultron uploading himself into Vision and waiting for Thanos’ arrival to destroy half of humanity is kind of compelling.

Ultron was originally programmed to protect Earth from threats. He uses the internet to learn about his creator and that makes him believe that Avengers are the actual threat. It’s also possible that he learned about Thanos via Mind Stone but if he was aware of Thanos’ arrival, it was really smart of him to hide inside Vision and allow Thanos to do the rest.

Again, this theory has a major hole, as if Ultron actually survived in Vision, he would’ve died in Infinity War, as Vision did.

What do you think about this fan-theory? Let us know in the comments below.