A fan cartoon shows a potential event in the life of the Alligator Loki, maybe the oddest character in the Disney+ series Loki. The two-panel cartoon was published on Twitter by @keiidakamya, who captioned it, “No but I want Croki history.” In the first panel, Odin (as portrayed by Anthony Hopkins in the Thor films) informs his son that he is adopted. It then pans to a distraught Croki, who can only react with “*Confused alligator noises*.”

Loki the Alligator made his debut in Loki’s sixth episode, “Journey Into Mystery,” along with other alternate-timeline versions of the God of Mischief. The strange character emerged from an early pitch meeting with producers Steven Broussard and Kevin Wright, according to series creator Michael Waldron. “We were talking about how we wanted to meet a lot of different Loki’s in this episode,” Waldron added. “I just thought, there should be an Alligator Loki.” And it’s like, “Why?” “It’s because he’s green.” “It’s so dumb, but it also makes perfect sense,” he said. “You almost have to take it seriously, like if he’s [Loki]?” Why shouldn’t Loki come in alligator form? That might be an alligator universe or anything. It’s the kind of snarky stuff that we play straight and make the audience take seriously in our show. ” 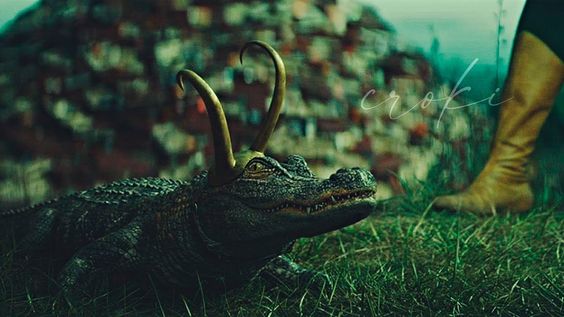 Waldron was unsure whether Croki is a Norse God or just an intelligent lizard with some snazzy headgear “I know, but I want people to be curious. That should be the topic of the next big Marvel argument.” Loki stars Tom Hiddleston as Loki, Owen Wilson as Mobius M. Mobius, Gugu Mbatha-Raw as Ravonna Renslayer, Wunmi Mosaku as Hunter B-15, Tara Strong as Miss Minutes, Eugene Cordero as Casey, Sasha Lane as Hunter C-20, and Sophia Di Martino as Sylvie, with Richard E. Grant and Jack Veal. On Disney+, new episodes are released every Wednesday.

‘I’m not ashamed. I don’t care how it looks to you’: Amber Heard Slammed Paparazzi for Labeling Her Revealing Dress as Attention Seeking ‘Wardrobe Malfunction’