Marvel’s Daredevil is fighting against the Kingpin’s Bullseyes and the army. She knows that to defeat them, she needs to toughen up. And she is asking for help from Tony Stark to build her own killer armor.

Iron Man saves Elektra while she is brutally getting beaten by the Bullseyes. When she wakes up, she asks Tony Stark to create a tough killer armor. But will Tony Stark build her the armor? 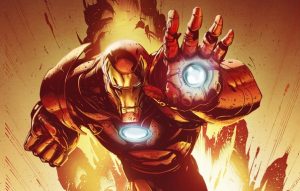 The current Daredevil by Marvel Comics sees Matt Murdock serving time and Elektra has taken over the duties of Daredevil to fight the supervillains. This is also her way of saving Hell’s Kitchen and while she does it, she has kept her murderous ways away as promised to Matt.

Wilson Fisk (The Kingpin) who is the mayor of New York is adamant about increasing his power in the city. And for the same, he has taken Bullseye and collaborated with scientists to experiment on him at Ravencroft. He has cloned Daredevil’s nemesis and plans on turning him into a superpower.

In Chip Zdarsky, Marco Checchetto, Marcio Menyz, and Clayton Cowles’ Daredevil #33 issue, Bullseyes stab Daredevil. Unlike Daredevil #181 issue, where she dies in the end, Elektra is alive in this recent issue. But barely. She has been beaten up, fallen off the building, got shot, Elektra passes out. She only remembers suited figures picking her up. When she wakes up, she finds Tony Stark standing in front of her.

Tony Stark tells her that Spider-Man and himself picked her up before she bled out. Elektra wants to take revenge on Bullseyes, and she asks Iron Man to build her the ultimate killer armor suit. However, she finishes her sentence by saying ‘figuratively, of course’. But the readers know that Elektra has a villainous past. And given the chance, she will get back to her old ways of murdering the villains. 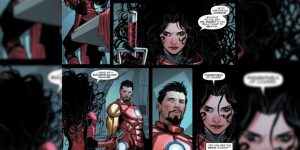 But one thing is for sure that Elektra will get back to Kingpin’s Bullseyes whether Tony Stark helps her or not. Read the Daredevil #33 comic book to know how the story progresses.