The third season of Daredevil focusses more on the theme of atonement And fear but there’s also a lot of political undercurrents that comes to the surface with the third season. And when it finally does surface, fans realise that it has been there since the beginning.

Wilson Fisk, reprised by Vincent D’Onfrio is almost free, about to reunite with the love of his life as he addresses the media outside his hotel where he had been caged for some time.

“I know most of you will find this difficult to accept,” he says, referring to the overturning of his conviction. “That’s only because you have been manipulated, poisoned into believing the news media’s fake story, that I am evil, that I am a criminal. Quite the opposite is true. Because I challenged the system, because I’ve told the truth and tried to make this city a better place, the people in power decided to tear me down … to tear me down with false allegations. They sent someone to frame me: Daredevil, the killer who’s now showing his true colors, who has tried to murder people in newspaper offices and churches, attacking our sacred institutions. Believe me. Daredevil is our true public enemy.”

With that, it’s clear who Fisk represents in this story. It’s no accident that Fisk secretly purchased a hotel and undermined trust in the court system and FBI. 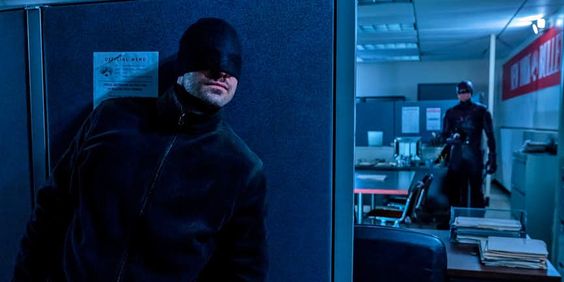 His speech checks off familiar boxes like, “news media’s fake story”; “the people in power decided to tear me down”; “they sent someone to frame me.” Later, a rival reporter gets in a shot at Karen Page (Deborah Ann Woll) and her editor Mitchel Ellison (Geoffrey Cantor) with a referenced to “the failing New York Bulletin.” All that’s missing is “Witch hunt” in this game of Donald Trump Bingo.

New Daredevil showrunner Erik Olsen explained that everyone, including Wilson Fisk, is scared of something, and that fuels their actions.

“We can only be free when we confront our fears because our fears are what enslaves us. That also allowed the show, for me, to speak for the world where we’re living in real life,” Oleson said, “where you have narcissistic tyrants who are playing to people’s fears, to pit them against one another, to attack the press, to undermine democracy, and kind of speak to the devils on our shoulders, as opposed to the angels on our shoulders.” 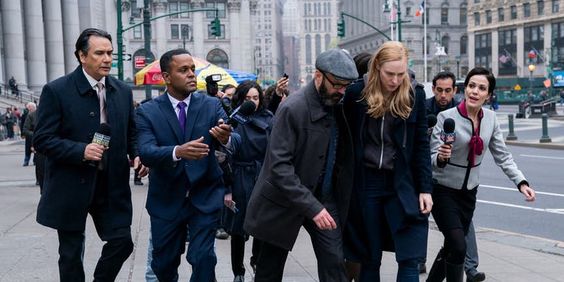 The third season of Daredevil depicts the notion of a devil on someone’s shoulder in Matt Murdock, who’s always imagining Fisk behind him. We also see this in Fisk manipulating unstable FBI Agent Pointdexter to make him look up to him as his North Star and moral compass. Fisk wants to transform the city’s longtime Guardian into an enemy of the people.

“What I also wanted this season to do was prescribe the salve, the solution to how to defeat people like that,” Oleson told CBR. “The way that I saw it was the power of the free press, which is embodied by Karen Page, the power of the law, which is in a lot of ways embodied by Foggy Nelson, and then, with Matt, the power of friendship and collective action, and overcoming our fears and differences to join together to topple that would-be dictator/tyrant/fascist/narcissist who’s trying to pit us all against one another.”

In the end, of course, all these elements and FBI Agent Ray Nadeem’s sacrifice combine to bring down Fisk, once and for all.