It’s been a tough week for both Warner Bros. and Henry Cavill as reports of Henry Cavill’s exit surfaced over the social media after a deal between Cavill and Warner Bros. broke down. Although the issue was later addressed by Warner Bros. who stated that there’s no confirmation on the next Superman film but the studio is in good “terms” with Henry Cavill.

Cavill is currently gearing up for his role in the upcoming Netflix series, The Witcher. The news of his exit caused an outcry from fans and enthusiasts, including the Pacific Rim director and Former Daredevil showrunner, Steven S. DeKnight. The director tweeted on social media, supporting the actor as Superman calling Cavill a “great” Superman.

However, when the director’s tweet was criticised by a fan, DeKnight responded to it saying, “That’s a gross generalization and not specific at all. Plus wildly inaccurate, in my opinion. You don’t like him, which is fine. But why go out of your way to shit on him when I make a positive comment?” 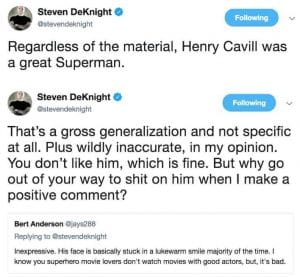 DeKnight helmed the acclaimed first season of Daredevil before he took his duties from Guillermo Del Toro for Pacific Rim 2. The director is now reportedly heading back to Netflix for an adaptation of the Frank Quietly and Mark Millar novel, Jupiter’s Legacy.

“A multi-generational American superhero epic, Jupiter’s Legacy follows the world’s first generation of superheroes who received their powers in the 1930’s. In present day they are the revered elder guard, but their superpowered children struggle to live up to the legendary feats of their parents. Steven S. DeKnight (Marvel’s Daredevil, Spartacus, Buffy the Vampire Slayer), who recently signed an overall deal with Netflix, will serve as showrunner and executive producer, with Lorenzo di Bonaventura and Dan McDermott also serving as executive producers for the series. DeKnight will also direct the first episode.”

We’re yet to see what happens with Cavill in the future, as the Studio is looking forward to focussing more on Supergirl but most likely it won’t be too long before he shows up again.